Pope Francis' push for Palestinian statehood is part of a series of bold initiatives to preserve the region's rich religious mosaic. 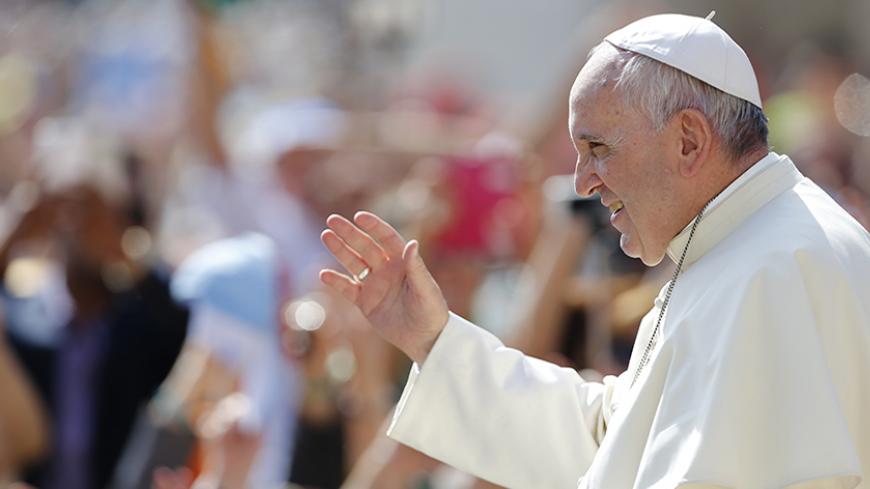 Pope Francis waves as he arrives to lead his weekly audience in St. Peter's Square, Vatican City, May 13, 2015. - REUTERS/Giampiero Sposito

The Vatican's forceful recognition of a Palestinian state May 13 is just the latest in a series of bold diplomatic moves aimed at ensuring that Christians will be able to remain in the birthplace of their faith.

From the beginning of his papacy Pope Francis hasn't hesitated to jump into the bloody politics of the Middle East, starting with his September 2013 appeal for a day of fasting and prayer to protest the planned US military strikes on Syria. Since then he has recognized the Armenian slaughter of 1915 as a genocide and repeatedly called for peace in the region, all in the name of defusing conflicts that threaten to tear apart a rich mosaic of cultures in which Christians once thrived.

"We cannot resign ourselves to a Middle East without Christians, who have professed the name of Jesus there for [2,000] years," The New York Times quoted the pope as saying during his visit to Turkey last year.

At other times Francis has sought to highlight the importance of religious and ethnic diversity more broadly. Nassif Hitti, the Arab League ambassador to Rome and the Vatican, said his goal has been to seek solutions to long-simmering conflicts that have fueled extremism and religious intolerance throughout the region.

"There is a feeling that the situation in the Levant is extremely dangerous for minorities, and the Vatican has responsibilities — not only spiritual responsibilities, but also as a state with relations with everybody," said Hitti, also an Al-Monitor board member. "Of course the pope is extremely assertive on these issues, indicating and underlying all the time the dangers that the perpetuation of the current situation could lead to catastrophe."

Vatican watchers say the confluence of the pope's personality, his Jesuit background and the geopolitical situation all combine to explain his assertiveness, which has been most evident with his efforts to restore relations between Cuba and the United States.

"He's acting that Jesuit spirituality [that] says you have to be a contemplative in action: Someone who's very prayerful, but at the same time very involved in the world," said Rep. Juan Vargas, D-Calif., a US lawmaker who spent five years as a Jesuit. "There's also other, practical notions. I think he's very very concerned about Christians and Christianity in the Middle East — there's no doubt about it. They're getting slaughtered in Iraq and other areas."

The efforts have earned comparisons with Pope John Paul II's shuttle diplomacy between East and West at the end of the Cold War. They've also been met with their fair share of criticism: Skeptics pointed out that Bashar al-Assad has been able to use the pope's calls for peace to paint himself as the defender of Christians; Turkey recalled its ambassador to the Vatican after the genocide remarks; and Israel and its US allies lost no time denouncing the latest announcement of a pending treaty to recognize Palestinian statehood.

Vargas called it a "terrible mistake to recognize a Palestinian state that doesn't exist." And he said the Syria prayer also made many lawmakers uncomfortable, since the planned US strikes were aimed at punishing Assad for allegedly using poison gas against civilians.

Hitti described the pope's Armenian genocide pronouncement as evidence of a "new Vatican assertiveness for calling a spade a spade." He has likewise made combating terrorism a key issue, Hitti said, not only through military force when necessary but also through socio-economic, educational, cultural and even religious reforms.

In some ways, Francis is seen as stepping in because other countries aren't stepping up, whether it's the civil war in Syria or the stalled Israeli-Palestinian peace process.

"Sometimes in discussions [Vatican officials] will talk about frozen conflicts, in the sense of not moving toward a settlement," Hitti said. "That's becoming acceptable. A certain level of violence is becoming banalized, which is extremely dangerous. That's the message they deliver to all ambassadors and officials that have their say in the affairs of the region."