While a Turkish military operation against Syria is unlikely, Mosul is another story. 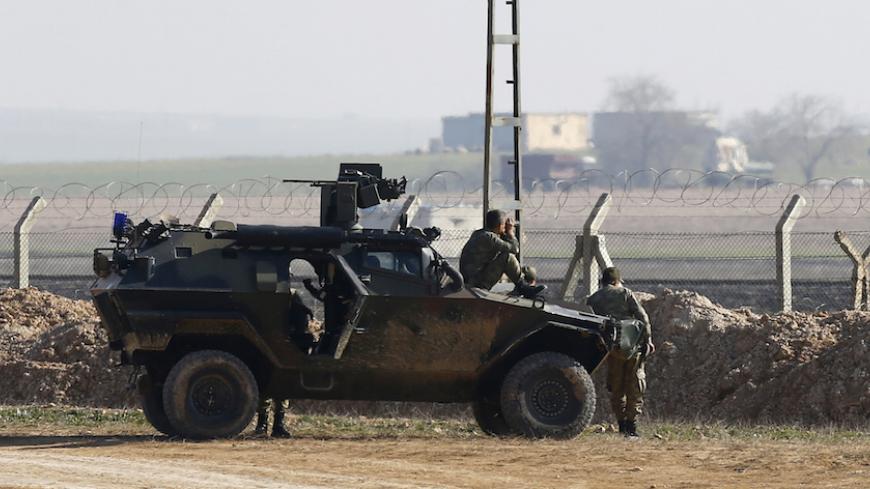 Turkish soldiers monitor the border as they stand guard near the Akcakale crossing in Sanliurfa province, southeastern Turkey, where Islamic State militants control the Syrian side of the gate, Jan. 29, 2015. - REUTERS/Osman Orsal

There has been a recent surge of news stories and commentary in the Turkish and foreign media that Turkey might launch a military operation against Syria and Iran. For example, the Huffington Post ran an article claiming that a joint Turkey-Saudi military operation is possible in Syria, based on sources knowledgeable about Qatar-brokered senior level contacts between Turkey and Saudi Arabia to put together a regional Sunni alliance. Another commentator claims that events have passed the point of possibility, and Ankara is already preparing for a military intervention in Syria to create a buffer zone there.

In an April 30 Milliyet article, “The Headline: Turkish soldiers in Syria,” Asli Aydintasbas links these claims to the approaching June 7 general elections. She wrote that she has been hearing backroom whispers that the Sunni alliance of Turkey, Saudi Arabia, Qatar and Kuwait is preparing to occupy Syria. She concludes her article by asking, “Will Ankara take one more step and move to create secure zones inside Syria in the coming months or even weeks? Will Turkish newspapers, busy with upcoming elections, suddenly hit the newsstands with the banner headline 'Turkish troops in Syria'”?

Another explicit claim along these lines was heard from Dengir Mir Mehmet Firat, former Justice and Development Party (AKP) deputy chairman and current parliamentary candidate for the pro-Kurdish People’s Democracy Party (HDP). According to Firat, failure by the HDP to pass the 10% election threshold in Turkey could lead to serious tumult. Firat bluntly warned, “If the AKP government and [President Recep Tayyip] Erdogan, mired in corruption, feel in danger, they will not hesitate even to start a war with another country to delay the election.”

Given the implications of these claims, all eyes are now on Ankara. Al-Monitor spoke to several security sources, all of whom requested anonymity. They all said that for the time being, the possibility of a ground operation against Syria or Iraq is not on the table in Ankara.

One source also said, “If these claims had any truth to them, I wouldn’t be in Ankara today, but either on the Syrian or the Iraqi border.” According to this source, both the Turkish army and the air force are in principle against major operations in Syria and Iraq. He said, “For today, the realism of the military is the best braking system we have in front of our political decision-makers.” He added, “Neither Turkey nor the Turkish military could live with the results of an intervention of the Turkish military, with its conventional land and air elements in the military quagmire of Syria. Conventional troops cannot survive in Syria without the support of Syrian opposition forces, whose allegiance is never clear.”

This source listed four major risks in a possible ground operation against Syria:

Another expert offered a similar analysis. He said there is no likelihood of a conventional military operation against Syria, and no preparations are being made for such an eventuality. He said, “Today we only focus on border security. If Turkey had wanted to enter Syria, we could have done that during the exchange of our hostages from the Mosul consulate or during the evacuation of the Tomb of Suleiman Shah.”

Given these two assessments, the question that comes to mind is whether Turkey will play a more active role in a major operation the US-led coalition is said to be planning to liberate Mosul from the Islamic State.

According to experts, some sort of active involvement in a Mosul operation seems, for historical, political and strategic reasons, more logical to Turkish political decision-makers than an operation against Syria. Historically, Mosul is usually cited as “unfinished business” because it is within Turkey’s famous National Pact, which is embedded in the collective memory of the Turkish public and holds symbolic significance to the national identity. That is why Mosul, politically, is a more logical target for Erdogan than Syria. For Erdogan to complete a job that modern Turkey’s founder, Mustafa Kemal Ataturk, left unfinished, and to go down in history as the “Conqueror of Mosul,” would accrue immeasurable domestic policy prestige.

There appears to be no strategic impediment that would prevent Turkey from engaging in a Mosul war. The AKP has warm relations with the Kurdistan Regional Government (KRG), which has already established a de facto administration in northern Iraq, and with its gains in recent years has taken major steps toward transforming itself into a de jure administration.

Sources in Ankara believe that the KRG is insisting that Ankara take a more active military role in combating IS in Iraq. Such an amplified role would also be a counter to Iran’s growing and disturbing military influence in Iraq. As a former military officer who had liaison duties in Kirkuk and Mosul during 2003-2004 and who observed Turkey’s influence on Sunni tribes and other groups, especially in Mosul, I can comfortably say that the Sunni population in that city would be open to cooperation should Turkey wish to take a more active role.

In sum, it is difficult to say with certainty that Turkish decision-makers are planning a military operation against Syria. In a recent Al-Monitor article, I had summarized the support Turkey could provide to a Mosul operation. It must be noted here that the anti-IS operation in northern Iraq is developing slower than expected, and it is not likely that one will take place before the June elections, thus denying Erdogan his “Conqueror of Mosul” banner headlines.

One factor overriding all other considerations is the realist approach of the Turkish military toward the situations in Syria and Iraq. It is known that the current chief of the General Staff, Gen. Necdet Ozel, whose term ends in August, and his designated successor, Gen. Hulusi Akar, the current commander of land forces, prefer prudent, cautious approaches that rule out military adventures in Iraq and Syria. For a Turkey that appears to have lost its brakes, because of the dominance of Erdogan, the only reliable braking mechanism in a dangerously militarized region is this realist and rational approach of the military.

One certainly gets the impression that the soldiers are back in control, but this time things are different. Their goal is to take Turkey to democratic elections without a major accident because of faulty brakes. Of course, the military has to use its realism as its brake skillfully, within the limits of democracy and civilian rule, to restrain the ambitions of politicians.

Can the military manage to keep the brakes on until the elections? Definitely, when it comes to Syria, but with Mosul they might fail.