No questions asked about Turkey's suitcases full of cash

Pundits fear that the new Customs Code will turn Turkey into a haven for money launderers and terror financiers. 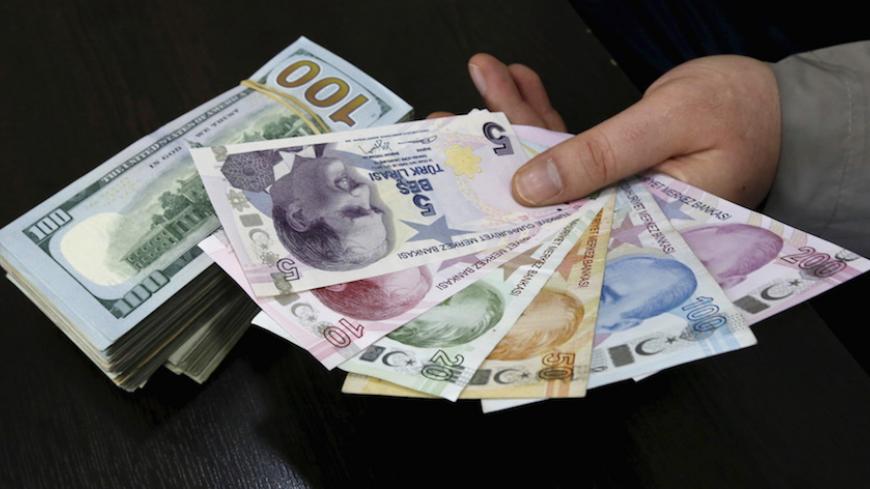 A money-changer holds Turkish lira banknotes next to US dollar bills at a currency exchange office in central Istanbul, April 15, 2015. - REUTERS/Murad Sezer

The Turkish Ministry of Customs and Trade issued new regulations April 15 for entering and leaving Turkey with any amount of cash. The new Customs Code had passed without much public attention until early May, when the news broke with the headlines “Hot money days are over, now starts the black money days” and “Unlimited cash entry into Turkey now legalized.”

In a rather foggy statement, Minister of Customs and Trade Nurettin Canikli said the previous code was unclear, adding there were contradictory clauses in the code, and customs personnel could not be flexible. He said they had only simplified the code. “We had many complaints from exporters bringing money into the country," Canikli said. "It could be from various countries, such as Iran, Iraq, Syria, the Balkans, where there are no banking services. Frankly, why does it matter if the money comes in cash or through a bank as long as it is money earned from exports? If this is dirty money, it will not be allowed to enter the country. There are no changes with regard to unrecorded cash.”

Yet, all pundits whom Al-Monitor contacted — bankers, customs officials, economists, senior economy editors of reputable news networks — agreed that the vagueness was introduced with the new code, and none were able to see what was wrong with the old code.

The previous Customs Code, which was six pages, was seen as compatible with EU regulations. When questioned about the compatibility of the 2015 codes with the EU, Canikli said, “We are not a member of the EU, we are Turkey.”

Indeed, there is sufficient reason to worry about the 2015 Customs Code, which is two pages shorter than the 2013 version. Yet, with those two deleted pages are red flags. Turkey has been on the gray list of the Financial Action Task Force (FATF) since 2011. The FATF took Turkey off its list of high-risk and non-cooperative jurisdictions only in October 2014. Turkey came to the brink of suspension of its membership in the FATF in October 2012. In its latest report, the FATF was still concerned with Turkey’s ability to institute a system that would identify and freeze terrorist assets. The report warned about Turkey's definitions for “terrorism financing” and stated that Turkey's procedures for freezing the assets of identified groups were too slow.

Emin Capa, CNN Turk’s senior economy editor, told Al-Monitor, “Turkey worked real hard to get off the gray list of the FATF. I doubt the government would enact any legislation that would reverse the decision.” Yet Capa had serious concerns about the new code. “There are three troubling topics. First, the sentence 'passenger cannot be compelled to make a declaration at customs.' What does this mean?” he asked. This line was added to the updated 2015 Customs Code, while many other items were excised. This line is indeed contradictory with the inspection regime.

An economist and columnist for the daily Hurriyet, Ugur Gurses, shared Capa’s unease regarding this statement. Income from exports was allowed in the 2013 code, Gurses told Al-Monitor. "You did not even have to declare your profit amount at customs," he said. "All banking transactions over $50,000 have to be reported to the Treasury. Theoretically, that is no longer the case if you are carrying cash."

The new code states, “Revenues from the export of goods and services, revenues with regard to transit trade, cash from foreign capital and other resources are free to enter the country through custom gates. [The value of] the items is not required to be declared and passengers cannot be forced to make declarations.”

Another concern of Capa’s was that public prosecutors would no longer be involved in the process. Previously, both the prosecutor’s office and the Financial Crime Investigation Bureau (MASAK) were responsible for potential crimes at the customs checkpoints. Now, the cases to be sent to prosecutors will be filtered through MASAK. “I have full confidence in MASAK," Capa told Al-Monitor. "Their investigations are credible and thorough. Under the new code they are the sole agency in charge.” So, this removes another layer of deterrence against illicit activity.

Capa also said that the new code permits the traveler to bring in “investment credit acquired in another country.”

It is puzzling as to why this sort of money cannot be transferred through a banking agency, as is the Justice and Development Party's changing the code now.

Note two intertwined issues: First is the stark ebb and flow of “net errors and omissions.” In the last seven years, there have been significant levels of unexplained cash from unidentified sources flowing into the Turkish economy. Second is the high level of Turkey’s external debt (which is a sum of public and private debt, where public debt is miniscule compared to that of private). In order to be able to meet the payment deadlines, there is an urgent need for cash. All pundits Al-Monitor spoke to agree that the urgent need for cash is the motive for the new Customs Code.

A high-level customs official, who spoke on condition of anonymity, told Al-Monitor: “After the 2013 code, we had dozens of our personnel trained abroad for appropriate ways of monitoring the flow of goods at customs. Now, we do not know what to tell the guys in the field. The new code is unenforceable. I cannot tell you what is punishable and what is not. This is going to lead to arbitrary enforcement and prosecutions because of the vagueness. We are hoping once the economy recovers, it will be revised.”

In the midst of an election campaign, not many Turks may be aware of this new code, but it's watched carefully in centers of commerce and security abroad.

“Until recently, Turkey was on FATF's ‘gray list’ for other systemic deficiencies," Jonathan Schanzer, the vice president for research at the Foundation for Defense of Democracies in Washington, told Al-Monitor. "But the new code could indicate a troubling setback. Practically speaking, lax policies on cash coming into Turkey could serve to benefit the wide range of illicit actors that have made Turkey their home in recent years. This includes more than a dozen members of Hamas, financiers of the Islamic State and the Nusra Front, actors who have been arming the Fajr coalition in Libya, and money launderers working with Iran. These are all terror finance challenges that Turkey has neglected to address in recent years, raising troubling questions about Turkey's will to combat them.”

The new Customs Code on cash flow into the country is troubling. It's difficult to understand how the origins of suspicious cash entries and transactions would be investigated if the passengers cannot be asked to declare the cash they are carrying. Turkey has gone through legislation oscillating between lax and strict versions of customs regulations that are detailed in the FAFT’s reports for money laundering and combating financing of terrorism. It owes its success of suspension of its membership to last-minute anti-terrorism financing enforced in February 2013. If this new code leads to regression on its efforts of combating the financing of terrorism, the threat of suspension of FAFT membership will be lurking back in Turkish economy.

This could even escalate Turkish descent into the "dark gray list," given the growing dangers of terror groups within its borders.