Desperate to stop the flight of foreign money, the Turkish government has tightened rules on how cash can be taken out of the country. 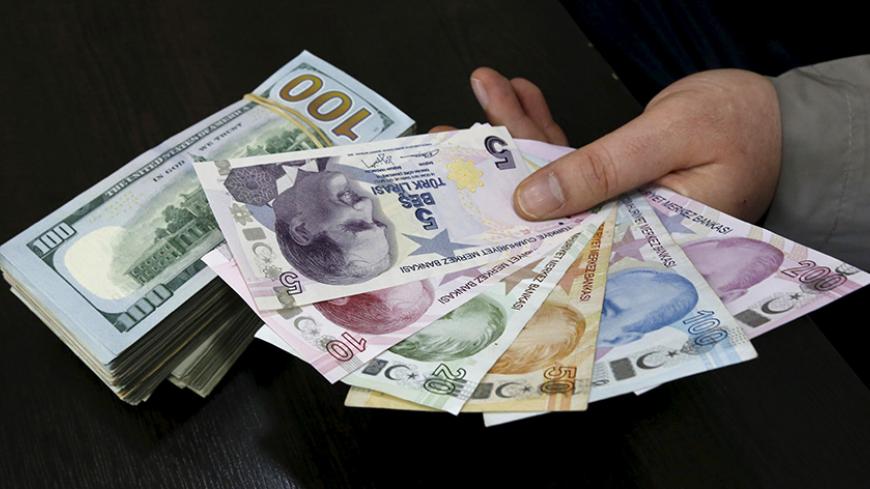 A money changer holds Turkish lira banknotes next to US dollar bills at a currency exchange office in central Istanbul, April 15, 2015. - REUTERS/Murad Sezer

ANKARA, Turkey — Unable to stop the economic hemorrhage sparked by the flight of foreign investors and money, Turkey’s government has tightened the country’s 26-year liberal foreign exchange rules. Travelers exiting Turkey are now required to make declarations of cash and credit cards or face sanctions on charges of money laundering and smuggling.

The flight of foreign investors and foreign capital from Turkey gathered speed in late 2014. Last year, it accelerated further amid increasing economic and political risks and controversial government moves, including the seizure of private companies, among them media outlets, through an increasingly politicized judiciary and the use of supervisory bodies as a tool to bully business people. Investor confidence was further shaken by a protracted election process — an inconclusive vote July 7 followed by snap polls Nov. 1 — coupled with the resumption of armed conflict with Kurdish militants, deadly terrorist attacks and heavy-handed security crackdowns.

After the Justice and Development Party (AKP) reclaimed its parliamentary majority Nov. 1, optimists argued that the continuation of one-party government, as opposed to the coalition the June 7 result had dictated, would restore both political and economic stability. This, however, did not happen. The Istanbul Stock Exchange saw net foreign sales of a staggering $1.13 billion in November and $640 million in December. In the last week of December alone, foreign investors sold $195 million worth of stock shares and Turkish treasury bonds. The Fed’s rate hike also stoked the flight of and demand for foreign currency, while further weakening the Turkish lira.

After June 7, ordinary Turkish citizens, too, began to increasingly shift from the lira to the dollar, seeking to protect themselves against the depreciation of the national currency.

All these factors forced the government to make some serious amendments in the foreign currency regime in late December.

Only a little more than half a year earlier, in April 2015, the Customs Ministry had issued a controversial circular in a bid to lure foreign currency to Turkey. The circular stipulated that travelers would no longer be forced to declare the foreign cash they bring to Turkey at customs, and that any suspicious voluntary declarations would be referred not to prosecutors but to the Finance Ministry’s Financial Crimes Investigation Board (MASAK). The amendment sparked criticism and raised questions: Was Turkey becoming a haven for illicit money? How would the financing of terrorism be controlled at a time when Turkey was already under fire for harboring jihadis in Syria? The government, however, ignored the criticism and refused to back down.

Yet, little foreign currency flew in, while the flight of foreign capital continued and Turks increasingly turned to the dollar. According to the Central Bank’s balance of payments report for the third quarter of 2015, announced Jan. 5, the bank’s foreign exchange reserves dropped by $1.1 billion to $119.6 billion despite the inflow of $7.8 billion from "unknown sources."

Alarmed by its failure to reverse the trend, the government took a fresh step Dec. 30, amending Decree No. 32 on the protection of the value of Turkish currency, enacted in 1989 as a milestone step liberalizing the foreign exchange market in Turkey. Until 1989, foreign currency transactions and the gold trade were the subject of tight control under the 1930 Law on the Protection of the Value of Turkish Currency, which considered the possession of foreign currency a crime and punished it with jail. The 1989 reform — a legacy of then-Prime Minister Turgut Ozal — came as a revolution liberalizing the Turkish economy and integrating it with global markets. The foreign exchange market was liberalized, Turkish citizens were allowed to open foreign currency and gold accounts in banks, exchange offices were allowed to operate alongside banks, and the draconian restrictions on carrying foreign currency while entering or exiting Turkey were removed. The rules of declaration at customs were also relaxed.

Under the Dec. 30 amendment, travelers exiting Turkey with cash of more than 25,000 lira ($8,263) or more than 10,000 euros or an equivalent sum of foreign currency are now obliged to declare the money to customs at airports and border crossings. A newly added provision says that in cases where the money is not declared, or incorrect or misleading declarations are made, the money in question will be taken by customs and considered suspicious. Customs officials will then notify MASAK and refer the case also to prosecutors on charges of trafficking.

The amendment covers also “documents enabling payment in Turkish lira,” which means that credit cards with a limit of more than 25,000 Turkish lira are also up for declaration.

In sum, the government — scrambling to halt the foreign currency flight — has taken a step away from the 26-year liberal foreign exchange regime toward a tight, control-dominated system, where those who fail to make the required declarations or declare incorrect or misleading sums can face charges of money laundering and trafficking.

The amendment is likely to affect mostly business people, investors and exporters, who will be now lining up at airports to fill in declarations amid the threat of sanctions inspired from the economic laws of the 1930s.

It is in this atmosphere that Prime Minister Ahmet Davutoglu and his deputy in charge of the economy, Mehmet Simsek, will visit London on Jan. 17-19 and Davos on Jan. 20-23 as part of a “persuasion tour” to promote Turkey to foreign investors and talk them out of fleeing. Davutoglu will then go to Berlin for a meeting with German Chancellor Angela Merkel.