Stiff competition among AKP partisans for extreme manifestations of adoration for President Recep Tayyip Erdogan are rewarded in pre-election season. 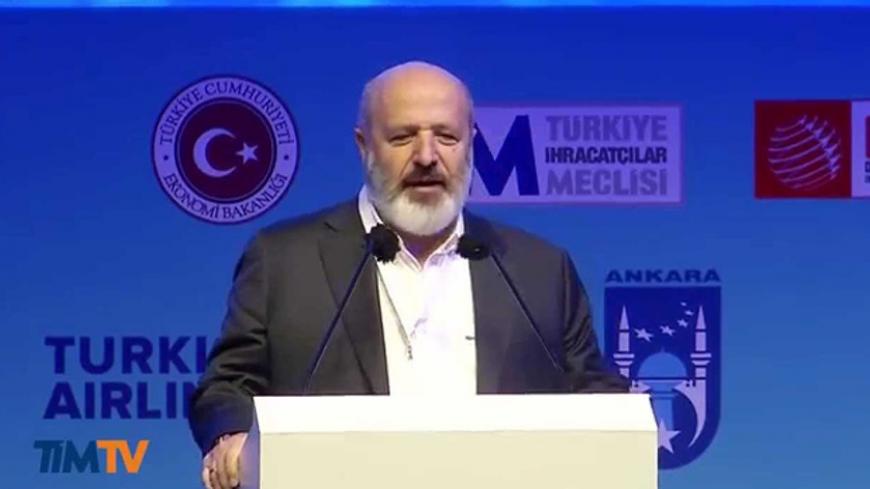 Turkish media mogul Ethem Sancak speaks at Innovation Week 2014 in Ankara, in this still image taken from a YouTube feed of the event, Feb. 5, 2015. - youtube.com/TİM TV

The Turkish media were rocked on May 15 by the words of the media mogul Ethem Sancak, who bluntly declared his love for President Recep Tayyip Erdogan in a TV interview. Sancak said, “While working on his campaign to get him elected prime minister, from my hometown Siirt, I met him. I saw his honesty and courage. I saw his opposition to oppression, his ability to protect the victim. The more I saw him, I feel in love [with him]. To be honest, during my days as a leftist, I could not understand the love between Mevlana [Jelaluddin Rumi, the poet] and [his companion and spiritual guide] Shams al-Tabrizi. As I got to know Erdogan, I realized that such a kind of divine love between two men is possible. When I [first] declared my love to him, I was already among the top 20 on the Forbes’ list. I did not need to wait for any favors by holding on to Erdogan’s coattails.”

The TV host tried to make sense of it all, as Sancak was obviously trying to clarify why a few days earlier at a rally in Rize he had gone on the record as saying, “An Arabic proverb says, ‘May my parents be sacrificed for you.’ I say to Erdogan: May my mom, dad, wife and children be sacrificed for you.”

Sancak's words have elicited a wide range of criticism and comments, not just from opposition groups in Turkey, but also from pious Muslims. Some conservative pundits argued that Sancak has substituted Erdogan for the Prophet Muhammad. The leader of the conservative Nationalist Action Party, Devlet Bahceli, echoed similar sentiments May 15 and commented further on extreme forms of dedication to Erdogan. Bahceli said, “They claim it is divine to touch Erdogan. They almost declared him a prophet. They called Erdogan ‘​the messenger of God.’”

Bahceli went further at a May 16 rally in Konya, the province from which Rumi and Turkish Prime Minister Ahmet Davutoglu come. He asked, “What does this protege of Erdogan try to tell us? What does this treasurer for Erdogan aim to do?” Bahceli was particularly taken by the implication that Rumi and his companion may have had a love affair. Indeed, several commentators through Internet postings and social media warned Sancak that according to legend, Rumi’s companion Tabrizi was murdered by none other than Rumi’s son. Of note, historians still debate what happened to Tabrizi. Some claim his disappearance was related to Rumi’s jealous followers.

In the TV interview, Sancak boldly dismissed the interpretations and innuendo of the conservatives, stating, “There is nothing wrong with declaring sacrifice of your family for a beloved leader. Arabs did this before the [time of the] prophet.” The TV host nodded affirmatively at his guest, who is also his boss.

Sancak owns the Star Daily and Kanal 24. Recently, he also acquired the dailies Aksam and Gunes and SKY 360 TV through state-run seizures. One can say with certainty that editorial independence has been compromised if, as in Turkey, all media are owned by 10 major conglomerates, and two-thirds of it is in the hands of entities sympathetic to the ruling party, the Justice and Development Party (AKP). Sancak has managed to acquire for himself a prestigious position in the AKP. So, to say the least, his love for Erdogan definitely has benefits.

That said, public reactions on social media have been a mix of humorous observations and puzzlement about this awkward declaration of divine love:

The outspoken fashion designer, and LBGT activist Barbaros Sansal tweeted, with a colorful photo, “I have been a gay man for 50 years. I have never seen a gay affair like this.”

As controversial as Sancak’s statements are, he is neither the first nor the last to publicly reveal affection for Erdogan. Indeed, a day after his comments, an Erdogan supporter waiting for the president to appear at a rally said to a news crew, “I would bite Recep Tayyip Erdogan and lick him.” His comments reminded some people of an incident during the 2013 Gezi Park protests, when in an interview at a rally an Erdogan supporter, after cursing the opposition, declared herself and those in the crowd the “hair on Erdogan’s bottom.”

After 13 years of successful rule, Erdogan has doubtless become an idol for millions in Turkey. Yet, why would people, from the extremely rich to the rather ordinary, express such intense loyalty and dedication to the man? Perhaps like siblings sparring to get more attention than the other from a parent, they espouse such intense and aggressive rhetoric to remain in the news. It seems these Erdogan supporters believe that the more extreme they are in declaring their love, the more they will be rewarded.

The most stern criticism toward Sancak came from the dedicated, pro-AKP pundit Akif Beki, who took aim at Sancak, writing, “Exaggerated support for Erdogan is counterproductive. You become a liability rather than a pillar.” This radical outburst of loyalty appears to point to intra-party competition. Beki’s words must have fallen on deaf ears, as Erdogan's senior adviser Yigit Bulut appeared on late night TV May 19 and informed the public, “I have two guns and several bullets. No one can get to the president before they kill me.”

Behlul Ozkan, an associate professor of international relations at Marmara University in Istanbul, explained the situation to Al-Monitor as he see it:

"In Turkey we are approaching crony capitalism. We can almost apply the rentier state concept [from oil-rich countries]. In Turkey the rentier state is built upon the forests in major cities, rivers and mines. Gezi Park and the Soma mine are the best examples of these. What we see in Gezi is a park, what he sees is a $2 billion profit. In the Soma mine, 301 miners died because the working conditions have regressed to 19th-century standards for more profit. These private companies, which have acquired their assets through government support, have to keep supporting Erdogan in return to sustain their investments. For this precise reason, they also had to acquire quite a few media outlets to manipulate public opinion. Sancak's love can be explained by the fact that if Erdogan is not in power, his profits are not sustainable. Plus, the government protects these entities from any possible legal charges against misconduct. So it is an interdependent relationship. The only way to climb up the hierarchy is through loyalty to Erdogan, not merit. If Erdogan loses, they lose, so they all have to rally around him. ‘Love’ is a loaded word, because it assumes unconditional dedication. Sancak wants us to love Erdogan, no questions asked."

Indeed, he does. Without the adoration and loyalty of the masses, the future would be bleak for the AKP. Meanwhile, for others, the adulation is somewhat troubling. As the Turkish novelist Mehmet Murat Ildan said, “He who loves a dictator is much more dangerous than the dictator himself.” This may well be the reason why cultures of authoritarianism do not end even when dictators are toppled.