Is there a potato conspiracy in Turkey?

A fall in potato crops, increased exports to Syria and Iraq and hoarding have led to an unprecedented potato shortage in Turkey. 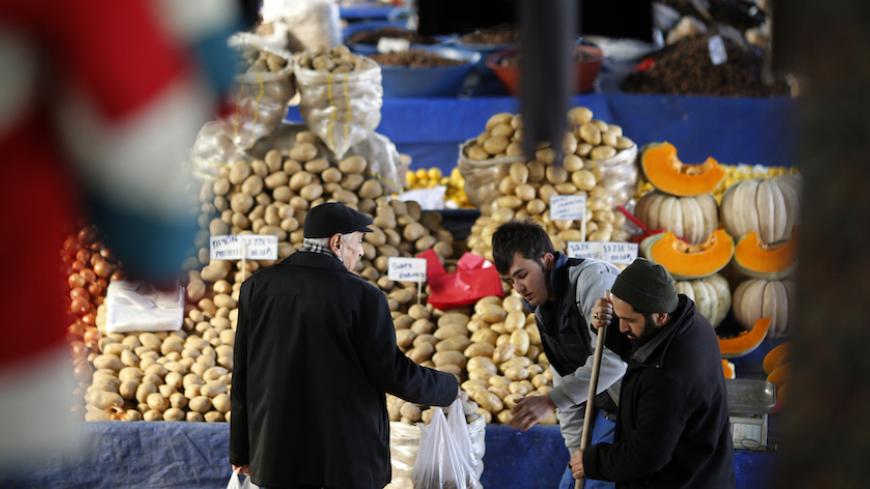 A vendor sells potatoes and other vegetables to a customer in an open market in central Ankara, Feb. 5, 2014. - REUTERS/Umit Bektas

Potatoes are not to be taken lightly. In the 1840s, the history of a nation was swayed when disease ravaged Ireland’s potato crops and the resulting famine reduced the country’s population by some 25%, as a million people perished and at least another million emigrated during the seven years now known as the Great Famine, the Potato Famine or Gorta Mor in Irish.

In 1996, I was among journalists who accompanied Turkey’s parliament speaker on a visit to Ireland. Irish officials spoke with gratitude about the three grain and potato-laden ships the Ottomans sent to Ireland in 1847 as the Great Famine plagued the country. During the visit, a plaque of gratitude for the Ottomans was placed on the historic town hall building in Drogheda, where the aid ships had arrived.

Turkish potatoes, which helped relieve the Irish famine, are now feeding people in war-torn neighboring countries. Turkey’s potato exports rose to 300,000 tons in 2013 as the demand from Syria and Iraq soared. Exports to the two countries are still continuing today.

The reason for the potato’s appeal in times of war and famine lies in its nutritive value as a rich energy source. The potato helps relieve fatigue, meets the body’s water requirements, detoxifies blood from the chemical residues of air pollution, radiation and pesticides, and helps cell renewal.

But amid the increase in exports, the potato output in Turkey declined, sending prices skyrocketing on the domestic market. The origin of Turkey’s potato crisis lies in the overproduction in 2012, Semsi Bayraktar, head of the Turkish Agricultural Chambers Union, explained in an interview with Al-Monitor.

Bayraktar said potato production hit a five-year high of 4,795,000 tons in 2012, well above Turkey’s annual consumption of some 4 million tons, sending prices as low as 0.3 Turkish lira per kilo (about 15 cents at the time). Loads of crops were left unsold and then used to make fodder. Reeling from huge financial losses, many farmers abandoned potato cultivation the following year, bringing the 2013 produce down to 3,948,000 tons. In the meantime, exports began to increase, driven mainly by Syrian and Iraqi demand, which led to a shortage and climbing prices on the domestic market.

Bayraktar said he expected the prices to fall in the coming weeks. “The produce had fallen in 2013 after potato plantations shrank following marketing problems the previous year. In 2014, adverse weather conditions kept the produce at 4,166,000 tons. Then in January 2015, frost hit the fields. So, the decrease in the crop has been pushing the prices up over the past two years. But now the new harvest season has arrived. The prices will begin to fall by themselves. Allowing potato imports at this time will harm producers,” Bayraktar said.

The government has blamed the rising prices on hoarding, but this alone cannot explain the shortage. The fall in output, the increase in exports, frost and floods in major agricultural regions such as Odemis, Adana and Hatay have all driven the prices up. As a result, the farm-gate price soared to 2 Turkish lira (78 cents) in Nigde and Nevsehir, Turkey’s main potato-producing areas, in early April, climbing to 4 Turkish lira ($1.50) at outdoor markets and 5 Turkish lira ($1.90) in supermarkets.

With potato becoming a luxury food just in the run-up to elections, the infuriated government threatened to give the green light for potato imports from Iran to punish both hoarders and retailers. “Potato prices have increased seriously over the past year, and profiteering has been under way for the past two months,” Economy Minister Nihat Zeybekci said earlier this month. “We’ve completed the necessary preparations. To those who buy the potato for 1 lira from producers and then sell it for 5 lira to consumers, we are ready to teach a lesson and, if need be, blow up the potato in their faces,” he warned.

The government has not yet given the final go-ahead for potato imports. But by threatening to do so, it is hoping to “discipline” retailers and force hoarders to put their stocks on the market. Officials continue to lash out on hoarders almost on a daily basis.

Following the economy minister’s outburst, Customs and Trade Minister Nurettin Canikli grumbled that “some are manipulating the market, trying to obtain unfair gains through profiteering,” charging that two companies were known to be holding 70,000 tons of potato.

Asked about the claims of hoarding, Bayraktar suggested that middle men traders, rather than producers, were the likely culprit. “The crop that we call ‘winter produce’ is no longer in producers’ hands. It’s largely in traders' hands.”

Agriculture Minister Mehdi Eker, meanwhile, said potato imports should be allowed only as a last resort.

The government wielding the import stick, the prospect of cheap potato coming in from abroad and several raids on warehouses proved effective. Tradesmen began to put their potato stocks on the market, bringing the price down to about 3 to 3.5 Turkish lira.

Yet, everyone in Turkey continues to talk about potatoes, now a favorite subject ahead of the June 7 general elections. Ministers treat the issue as a “potato conspiracy” against the government, while opposition parties keep the controversy alive as proof of the government’s failed economic policies.

The potato has provided ammunition to politicians as well as satirists and social media users.

Emin Haluk Ayhan, deputy chairman of the Nationalist Action Party (MHP), for instance, toured the vegetable market in Denizli, his electoral district, with a sack of potatoes on his back, telling voters that “the MHP will ease the potato burden.”

The popular satirical news site Zaytung, Turkey’s equivalent of The Onion, “quoted” the head of the Potato Producers’ Union as saying that “using the Arena Stadium as a football pitch is a waste of resources” and that football fields should be used to grow potatoes.

Hurriyet cartoonist Latif Demirci, for his part, satirized how a staple had become a luxury in Turkey with a fortuneteller reading a cup of Turkish coffee: “I see imports, dear. Potatoes will be flooding your household very soon.”