Does US have right tools to help success story like Tunisia? 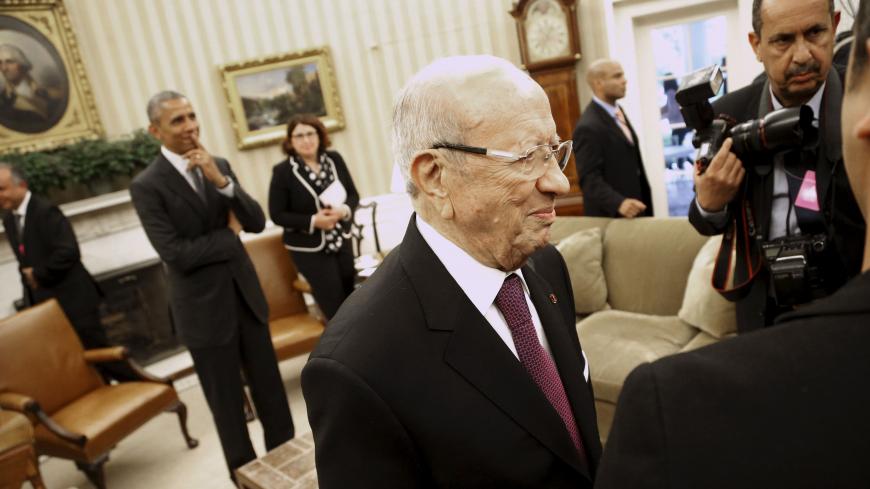 Tunisian President Beji Caid Essebsi (C) walks toward journalists and members of his staff after talking to reporters following his meeting with US President Barack Obama in the Oval Office at the White House, in Washington, May 21, 2015. - REUTERS/Jonathan Ernst

Tunisia is doing everything right in Washington’s eyes, and that’s got US policymakers stumped.

Tunisian President Beji Caid Essebsi’s visit during the last week laid bare the limitations of a Middle East policy that has long favored military assistance and anti-terrorism. Instead, the Arab Spring’s only success story is asking for help creating jobs and tackling poverty, forcing the United States to once again rethink its approach to the region.

“We have to have a conversation in Congress as to whether we have enough nonmilitary tools to help countries like Tunisia,” Sen. Chris Murphy, D-Conn., told Al-Monitor after meeting with Essebsi on May 20.

“Right now, most of our wells are dry when it comes to economic assistance and so we can’t offer them as much as we should,” said Murphy, the top Democrat on the Senate Foreign Relations panel on the Near East. “Tunisia is a country that desperately needs more economic assistance from the United States, but under our current division of military and nonmilitary aid, there’s not a lot in the pot for them.”

“We ought to be focused more on countries where things are going right, like Tunisia,” said fellow committee member Tim Kaine, D-Va. “The good news is there was good attendance because I think a lot of the senators understand that this is a relationship that we need to nourish.”

Committee Chairman Bob Corker, R-Tenn., said he plans to start looking at new ways to help the country of 11 million — including possibly resurrecting a long-dormant proposal for a free trade agreement.

“They’re certainly a shining example that’s very different than the tide that’s been in that region,” Corker told Al-Monitor. “We certainly should think about unique ways for us to be involved with them economically.”

The soul-searching comes despite the Obama administration’s best efforts to indicate that it has heard Tunisia’s plea for an economic lifeline loud and clear. Essebsi’s two-day visit included a business roundtable led by Commerce Secretary Penny Pritzker, and a joint Washington Post op-ed by the two presidents highlighted US assistance to help build lasting democratic institutions and create jobs ahead of security cooperation.

“Amid the turmoil that so often dominates the headlines, it can be tempting to think that all of North Africa and the Middle East is gripped by disorder,” the op-ed said. “But in Tunisia, where the Arab Spring began, democracy and pluralism are taking root.”

The two countries also signed a memorandum of understanding, which the State Department has refused to make public, that includes support for economic development, security and cultural ties. This comes two months after the State Department asked Congress to double US assistance to Tunisia, to $138 million, in the wake of the attack on the Bardo Museum in Tunis.

“By signing this memorandum of understanding we are making clear America's commitment to support Tunisia’s democratic transition, and that backing is not solely in words,” Secretary of State John Kerry said during the signing ceremony with Mohsen Marzouk, the minister adviser in charge of political affairs.

A closer look, however, suggests the aid package remains heavily tilted toward military and security assistance, including border protection to help shield Tunisia from the chaos in neighboring Libya. Those two items make up 57% ($76.4 million) of the requested assistance for fiscal year 2016, according to an analysis by the Project on Middle East Democracy (POMED), with just 16% ($21.2 million) set aside for democracy and governance programs and the remaining 27% ($36.8 million) for other economic and development assistance.

POMED’s annual report also found that for the Middle East overall, the proportion of US military assistance is higher today than it was before the Arab Spring — even though the events of 2011 caught the United States by surprise and fueled calls for rethinking a regional policy dominated by military support for authoritarian leaders.

“Although many administration officials seem to understand the importance and value of stronger support for Tunisia’s transition, the country ultimately ends up viewed as a lower priority at the highest levels when compared to the many crisis points in the region,” the report concludes. “And although no one in either the U.S. administration or Congress is arguing against a stronger U.S.-Tunisia relationship, policy shifts in this direction lack the needed high-level political will.”

“The Obama Administration’s lagging support for Tunisia says much more about the state of things in Washington than in Tunis,” Tamara Cofman Wittes, a former State Department official who now heads the Center for Middle East Policy at the Brookings Institution, wrote May 19. “The obstacles to more ambitious aid programs, more intensive political dialogue, and more robust engagement on trade are not hard to find inside the Beltway: budget cuts make it hard to expand embassies, and budget battles in Congress leave the State Department and USAID [United States Agency for International Development] unable to make new multi-year aid commitments to countries that aren’t already major US allies.”

One obstacle has been Congress’ past refusal to fund multilateral efforts to help fund Arab countries’ transition to democracy during the Arab Spring, Bloomberg pointed out this week. Lawmakers at the time worried that a $770 million State Department proposal was little more than an ill-conceived slush fund.

Essebsi used his visit to put the United States on the spot. He acknowledged that the country’s youths are joining the self-proclaimed Islamic State in worrisome numbers, but said getting the economy in order was vital to combat terrorism.

“Many people say, ‘Oh, you have a lot of people who went to jihad.’ Yes. Why? Because we have high unemployment. Yes, we have a lot of poverty. There are some regions of our country that are totally marginalized. We have to take care of that,” Essebsi said at a US Institute of Peace event appropriately titled "Beyond Security: Why a U.S.-Tunisian Strategic Partnership Matters."

“We tell all our friends who are constantly and every day thanking us for our achievements and our successes. Well, let me say that we’re still very vulnerable and it would disappear if the economic situation does not improve,” he said. “We are going to make Tunis come out of this difficult situation, and hopefully it will not stand alone. Now that we are having difficulties, do you want everyone to just stand there and look at us?”