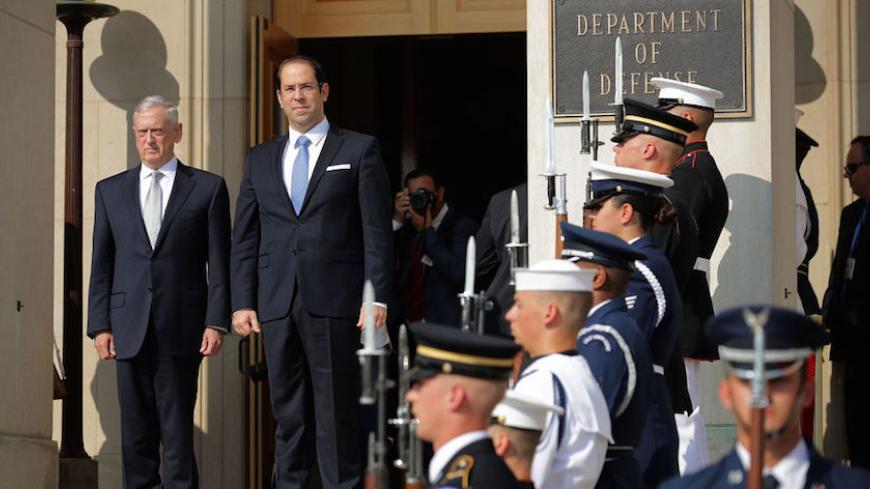 Chahed made the Pentagon his first official stop on his first US trip as head of government, underscoring the importance of the US-Tunisian relationship as the fledgling democracy battles domestic terrorism and instability in next-door Libya. His trip’s success will largely hinge on Chahed’s ability to reverse a proposed 82% cut in US military assistance over the fiscal year 2016 under President Donald Trump’s budget blueprint.

“We hope that we can count on the steady support of our strategic partners in the United States,” Chahed wrote in an op-ed published over the weekend by United Press International. “For America and all nations with a stake in the success of Tunisia’s democratic experiment, betting on Tunisia is betting on the right side of history.”

Mattis appeared receptive to the argument. According to a readout of their meeting, the secretary of defense lauded Tunisia for its “leadership in promoting regional security and stability in northern Africa” and “expressed his desire for greater defense cooperation in the future.”

“The two leaders discussed the importance of the US-Tunisian defense partnership, Tunisia's security situation and counterterrorism assistance,” according to the readout. “Both leaders noted the progress and significance of military training, intelligence sharing and defense cooperation.”

Mattis then “affirmed the strong US commitment for continued support to Tunisia.”

Since the 2011 Arab Spring, Tunisia has leaned heavily on the US government to build up its armed forces. Major weapons deals have included the donation of patrol boats and the sale of Black Hawk helicopters for counterterrorism operations. The Barack Obama administration also assigned Tunisia exalted status as a major non-NATO ally, giving the country priority on security cooperation.

Princeton University doctoral candidate Sharan Grewal told Al-Monitor that in 2016, US aid made up around 10% of Tunisia's military budget. Tunisia is hoping the United States will help fund an electronic surveillance system along its border wall with Libya by next year.

Trump’s proposed cuts could notably jeopardize Tunisia’s ability to deal with the threat from the Islamic State, also known as ISIS, many experts agree.

“There’s a presence of ISIS on their border, and this administration made ISIS a top national security priority,” said Sarah Yerkes, a senior fellow at the Carnegie Endowment for International Peace and a former Defense Department official. “If you’re serious about that, why on earth would you decide to cut support?”

Despite the proposed cuts, the appearance of top Mattis aides at the meeting — including the defense secretary’s chief military adviser — suggest the Pentagon remains committed to cultivating Tunisia as a key military ally.

“It shows that they are taking this meeting seriously,” she said. “It’s not just a photo-op. They’re looking at it from a longer-term strategic view. It’s not a conflict that’s going to end. This is something that the US is interested in investing in.”

Compounding the Pentagon’s interest, Tunisia has seen a disproportionate number of its citizens join the Islamic State on the battlefields of Iraq and Syria, fueling militant attacks when they return home or travel to Europe.

"Tunisia exports the largest number of foreign fighters writ large in the Arab world,” said Ben Fishman, an associate fellow at the Washington Institute for Near East Policy and a former National Security Council official. "That’s where a package of security assistance and border security needs to go hand-in-hand with economic security assistance that we’ve done. Effectively zeroing out would be a devastating result."