What does peace mean for Gazans?

The current situation in Palestine is similar to what it was before the Oslo Accord, which does not necessarily mean that a new peace agreement might be reached with Israel. 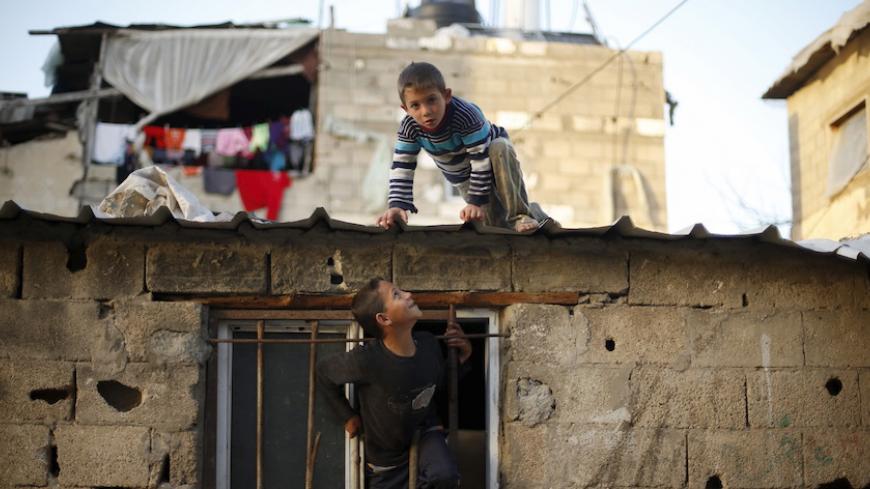 GAZA CITY, Gaza Strip — The proposal by French Foreign Minister Laurent Fabius on Dec. 30, 2014, to the UN Security Council has raised many questions about whether the West Bank and the Gaza Strip are ready for a peace agreement and a new round of negotiations. Fabius is set to submit a draft resolution to the Security Council before September, in an effort to resolve the Israeli-Palestinian conflict and establish a Palestinian state.

According to international and local newspapers, the draft resolution proposes “setting a maximum deadline of 18 months to reach, through negotiations, a just, lasting and comprehensive solution.” The proposal asserts that “if no agreement is reached at the end of this period, France will announce that it is officially recognizing the State of Palestine.”

The draft resolution calls for the implementation of the “two states for two peoples principle” and the establishment of a Palestinian state “based on the borders of June 1967, with land swaps between the two sides.” But talking about any resolution that is applied on the ground is preceded by a fundamental question about how ready Gaza is about any future peace project, having fought three harsh wars during which faith in resisting has become entrenched.

In this context, a 24-year-old activist told Al-Monitor on condition of anonymity, “Israel wages wars on Gaza under the pretext that it is fighting what it calls terrorism. But frankly, [Israel] has spawned terrorism due to its violent wars that killed thousands of civilians. There is a whole generation in Gaza that never knew a culture of peace. All it saw was war and killing. How can it accept a peace deal with the enemy?”

Youth activist Ali Ahed told Al-Monitor, “We must first agree on the definition of peace. Does it mean two states as drawn up by the Oslo [Accord], or achieving peace through one democratic secular state with Israel?”

Ahed said that the potential for peace within the current context of political division and the delay of reconstruction is impossible despite the fact that Gaza’s society is eager for a normal and stable existence.

Political analyst Hani Habib does not preclude the emergence of a new peace agreement. He told Al-Monitor, “This stage is quite similar to the period before the signing of the Oslo Accord. Back then [in 1993], there was a fiscal tightening around the Palestine Liberation Organization. And when the Oslo Accord happened, all parties were able to swallow it. … The situation is now quite similar. Everyone would accept any solution that would keep them alive and stop the deterioration of living standards. Securing the daily livelihood has become a substitute for the liberation of Jerusalem and to freezing settlement activity.”

Ten months after the latest war, which started on July 8 and ended on Aug. 26, 2014, the Gaza Strip’s living conditions have been deteriorating. The reconstruction process has stopped. Nearly 100,000 Palestinians are living in shelters or with relatives.

Ghazi Hamad, a Hamas official and deputy foreign minister, disagrees. He told Al-Monitor, “Yes, the circumstances are similar to before the Oslo [Accord], but they will not necessarily lead to the same result. Everyone, whether Hamas or Fatah, is convinced that negotiations will lead to nothing and that any decision must be made by all Palestinian components, whether it is a decision to resist or negotiate. … I am convinced that with the right-wing Israeli government, the Palestinian division and the volatile situation in the Arab world, the peace process is not a priority, even for the major countries that are currently focused on Syria, Iraq, the Islamic State and Yemen.”

Habib pointed out that this French draft resolution comes while Israel is talking about its national security and its desire to renew a regional Arab agreement. He said, “I see this talk as some sort of response to international pressure on Benjamin Netanyahu and his government in order for him to discuss the Arab peace initiative and show that his right-wing government is capable of conducting such a discussion.”

Hamad said that Israel views the peace process from the standpoint of pure interest and that the Palestinians have a long experience with Netanyahu, an experience whose result was zero. The settlements have increased and the Oslo Accord was sidelined. “President Mahmoud Abbas and the Palestinian political forces are seriously thinking about more realistic options and alternatives to confront the occupation after waiting 20 years without a radical change in the Israeli position,” he added.

He pointed to the need for a serious pause and called for re-forming a unified Palestinian political vision and strategy by all the forces.

Habib wondered what the next peace process will look like in light of “the existence of the state of Gaza, which is a Hamas state.” He said the current political efforts are not aimed to undermine, but to legitimize this state. “I believe that Hamas will lead any new agreement. The appropriate environment for that is here,” he said.

Hamad rejected this idea completely and said, “The Gaza Strip is not separate from the general [Palestinian] political issue. Therefore, the political stance must be united despite Israeli attempts to isolate Gaza.”

In regard to Hamas’ position on a long-term truce, Hamad said, “Hamas’ position, in principle, is not opposed to the idea of a truce … it is not a Hamas-specific position. The position must be a national Palestinian position, so that no one says that there are secret negotiations.”

He stressed that regarding the truce, Hamas was only able to propose ideas, not a clear formula. “There is nothing on the table, whether by Hamas or Israel or other countries. What some are saying are exaggerations,” he said.

Ibrahim Abu al-Naja, a member of the Fatah Revolutionary Council, said that the only project available regarding the peace process is the Arab peace initiative. He said that it fits with what the Palestinian side has proposed. He told Al-Monitor, “We respect all intermediaries and those who wish that the negotiations [would] restart. But we tell them that we will not go back to the negotiations. Israel must implement previous agreements before any new agreements are made.”

It is hard to walk in the streets of the Gaza Strip without noticing the effects of war. It is also hard to take your child to shop for toys and him choosing a toy gun. Gaza has been under siege for nine years, and its residents live in a large prison. Peace for them is no more than a fantasy.