Some students and people seeking treatment in Gaza are unable to travel as they wait for their passports to be issued or renewed, while the Ministry of Interior slowly works on sorting out the procedure. 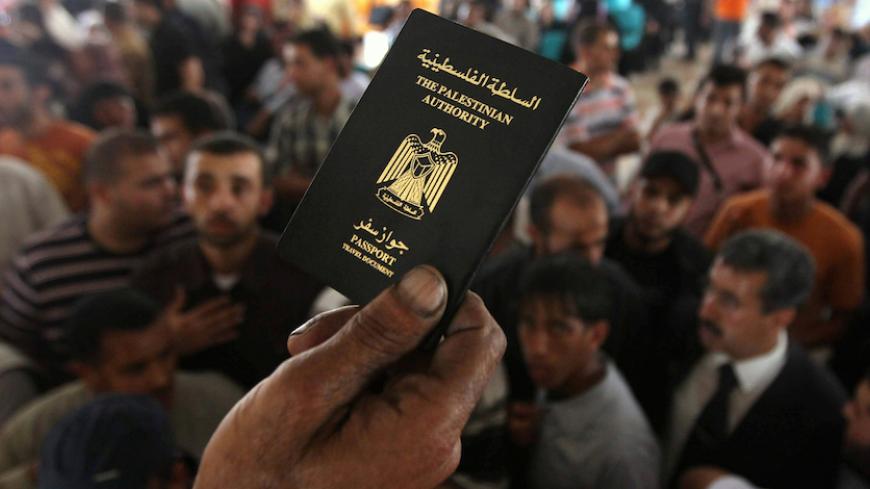 A passenger hands back passports to Palestinians waiting to cross into Egypt at the Rafah border crossing in the southern Gaza Strip, June 1, 2010. - REUTERS/Mohammed Salem

GAZA CITY, Gaza Strip — In February, Suleiman al-Dali, a student, lost a scholarship to study for a bachelor’s degree in engineering in Turkey after the Interior Ministry in the West Bank stopped issuing passports to residents of the Gaza Strip that month. Dali, who has a diploma in interior design from the University College of Applied Sciences in Gaza, had waited a long time and endured various hardships before being accepted into the Turkish program after fulfilling all the requirements.

He told Al-Monitor, “After I was accepted, I began the official procedures to finalize my papers and prepare for my travel to Turkey. More than three months ago, I applied to the Interior Ministry in Ramallah, through its services office in Gaza, to renew my passport, which was set to expire in a few months. However, the scholarship’s deadline passed [without my traveling to Turkey] because the passport was not renewed, under the pretext that they didn’t have passport booklets [in Gaza]. I, therefore, lost the scholarship, which for me was like a dream that suddenly turned into a mirage.”

Dali is not the only victim of the halt in issuing passports. Thousands of Gaza residents are waiting to receive their travel documents after applying some three months ago through the services offices in Gaza. Usually it takes about a month to process applications and for an applicant to receive his or her passport. Those applying for a new passport must pay 350 shekels (about $90) and provide identity documents and other papers attesting to scientific and functional qualifications if traveling abroad for an academic program.

Walid al-Halabi, the owner of a travel and general services business in Gaza City, said that issuance and renewal services for passports stopped in mid-February, which has led to a backlog of thousands of applications in all the services offices throughout Gaza.

“In my office alone, there are about 200 people registered to obtain or renew a passport,” he told Al-Monitor. “This is in addition to the other offices, each of which has hundreds of these applications. The applicants desperately need to travel.”

Halabi said that a few passports had been issued in the past three months as a result of favoritism, with no concern for those who might urgently need to travel. He explained, “During the past few months, only six passports were delivered through my office, out of a total of 200 applications. The expedited delivery was the result of connections [applicants had] at the ministry, while the general issuance of passports had been halted on the pretext that there were no booklets for printing them.”

Halabi noted that those applying for passports through his office ranged from students with grants to study abroad and people with work contracts outside Gaza to patients traveling for medical treatment.

Interior Ministry Undersecretary Hassan Alawi denied that there is a crisis in passport operations. “Who said that there has been a complete halt in the issuance of passports or a scheme to stop issuing passports to the people of Gaza?” he asked, not waiting for an answer. “It seems as if there is a crisis concerning passports, but this is not true. Furthermore, the number of passports that have been issued to Gaza residents, which is certainly a natural right for them, is at its highest levels this year.”

Alawi also said, “In addition to the fact that Gaza is under siege by land, sea and air, it has no working airport or even a port. The border crossing is even closed to those wanting to go on Umrah [pilgrimage to Mecca], which people do all year long. It is not a prosperous area, and there is no constant travel, so why these urgent requests!”

The undersecretary claimed that passports are not being issued at the moment because his ministry has been improving procedures to speed up the process in the future. “Citizens will be able to hand over their passports [for renewal] on the spot,” he said. “We chose this period to carry out a comprehensive update on the computers [used for passport processing], as it was the most suitable time. Work will resume as normal beginning on June 1, and citizens will be able to receive passports shortly after they submit the application to us.”

Alawi stressed that obtaining a passport will no longer be an obstacle standing in the way of a Gaza citizens’ desire to travel. “We are betting on speed and quality. The coming procedures will shorten the time between the handover and issuance of passports from weeks to one day. Yet, no updates have been made to the passport,” he said.

Between the citizens’ need to travel and the Interior Ministry’s reluctance to expedite the current process, patients’ need for treatment and the dreams of students are, at the moment, dying.