Poverty and unemployment have pushed many women to become the source of income to their families, thus seeking to open their own enterprises through Islamic loans. 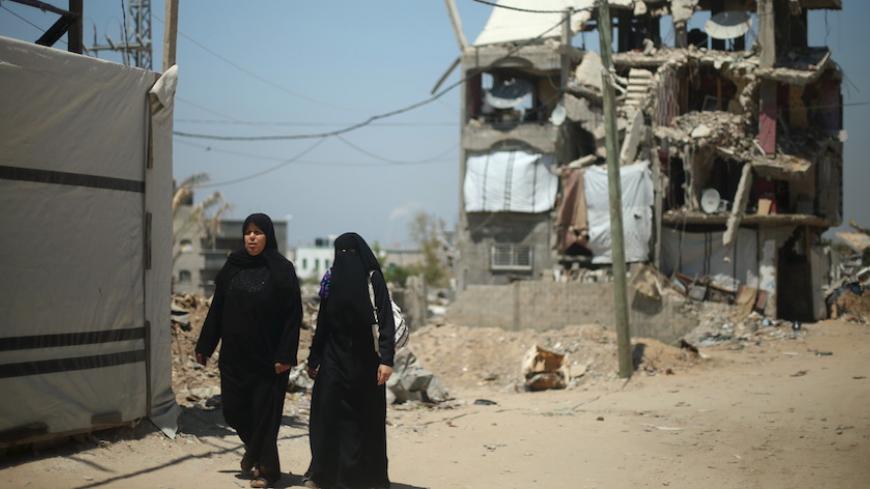 Palestinian women walk in front of a house that witnesses said was destroyed by Israeli shelling during the 50-day war last summer, in the east of Gaza City, May 6, 2015. - REUTERS/Mohammed Salem

GAZA CITY, Gaza Strip — Women in the Gaza Strip face increasing economic pressure as poverty rates reach up to 38.8% — particularly after Israel's latest war — and unemployment rates climb to a staggering 47%. This situation has pushed many women to become the breadwinners of their families and to seek sources of funding to establish small and sustainable enterprises by obtaining Islamic loans.

A "good," or true, Islamic loan is a loan provided by nonprofit and nongovernmental associations, offering support for women and poor families to help them out of poverty and to promote economic development. This type of loan carries a 0% interest rate, with a specified maturity date and a grace period, following the provision by the guarantor of a guarantee for the recovery of the loan value. This type of loan represents an opportunity for the poor to obtain financial services and facilities, and it encourages the marginalized workforce among women and the poor class in general to help their families.

Despite the existence of only a few lending institutions, most women resort to financial institutions to obtain these loans, also known as interest-free loans. According to the Palestinian Monetary Authority, there are nine lending institutions that have more than 62 branches and offices distributed throughout the West Bank and Gaza Strip.

“The association implemented the good loan project to empower women who are the breadwinners of their families, as the need for such loans increases following the rise of unemployment and poverty rates among Palestinian households," Majed al-Zabda, the project manager at Rowad Society for Social Development in Gaza, told Al-Monitor. "The association’s project also aims to empower widows, who have increased in numbers following repeated Israeli wars.

“Under the financing of Viva Palestina ​​Malaysia — which aims at enhancing development and aid projects in Palestine — Rowad Society for Social Development chose 15 small enterprise proposals out of dozens submitted by women who are the breadwinners of their families and gave these women a good loan to support the first phase of their enterprise," Zabda said. "These enterprises ranged from agricultural enterprises, such as raising sheep and rabbits, and small food-processing units. Moreover, the association seeks to launch a new phase to provide interest-free loans to a new number of poor families. The project will continue to support new numbers of households through the settlement of previous loans.”

According to a 2013 labor force survey conducted by the Palestinian Central Bureau of Statistics, one out of 10 Palestinian households is headed by a woman. The survey also indicated that 10.1% of the total households in Palestine are headed by females. In the West Bank, 11.1% of families are headed by women compared to 8.1% in Gaza. Female-headed families in Palestine are relatively small in size, with the average size of female-headed households in 2013 totaling 2.8 members compared to an average size of 5.7 for male-headed households.

Hiam Zahir, 60, is one of the women who obtained such a loan, offered by Frontiers Ruwad Association. She opened a small grocery store with her 23-year-old son to ensure a source of income for herself and her 10 daughters, since Hiam’s husband, who was the family’s breadwinner, died of cancer in 2009.

Hiam told Al-Monitor, “The interest-free loans are highly beneficial to marginalized women. The best option for them is to create their own enterprise that they are able to manage under Islamic rules but away from usury, which is prohibited.”

Several poor women refuse to resort to predatory lending institutions or banks to obtain funding for their enterprises since it is prohibited by Sharia.

Maher al-Huli, a doctor in Sharia at the Islamic University of Gaza and the head of the fatwa department at the Palestinian Scholar’s League, explained why interest-bearing loans are prohibited by Sharia. “This type of loan is an exploitation of human needs, and its economic and social damage lead to the concentration of wealth in the hands of a small group, to poor distribution of wealth, complacency and greed," he said. "The defaulting debtor in this kind of loan is stripped from all of his properties by the lender.”

According to Huli, “The good loan falls within the scope of humanitarian aid, as it provides relief to the needy, relieves stress and leads to good social networking between people since it does not bear interest.”

While Hiam is still at the starting stage of her enterprise, Umm Alaa, 49, a resident of Wadi al-Salqa east of Deir al-Balah governorate in central Gaza, managed to run a small beekeeping enterprise. Her enterprise was financed through a loan provided by another charitable organization in 2003 and is ongoing.

“My husband was banned from working in Israel after the start of the second intifada in 2000, and this is when our economic situation started to deteriorate, especially after the numerous diseases that he contracted and prevented him from working again," said Umm Alaa. "Therefore, I decided to take out a good loan to start an enterprise similar to my father’s during my childhood.”

Over the course of 12 years, Umm Alaa managed the beekeeping enterprise. She started out with 10 hives and developed her enterprise to include up to 52 hives. These hives were destroyed in the war of 2007 and only eight hives remained. They were also affected by the winter storm named Alexa that hit the Middle East in December 2013, and the 2014 Gaza war, which was coupled with a ground invasion that weakened and destroyed many of Umm Alaa’s hives. Despite all this, she continued to run her business.

Umm Alaa said that her business faced risks after the war as the beehives were also destroyed. “One day, the bees returned but did not enter the hives, and most of them died and fell to the ground in several piles," she said. "They were poisoned by an unknown fatal type of gas capable of exterminating all forms of life in the targeted area, which the Israeli army has been releasing on several occasions on the borders of the Gaza Strip since the end of the 2014 Gaza war to be able to monitor any movement there. This was done for a security reason aimed to spoil the agricultural soil and monitor the border area to have a clear vision and spot any infiltration by any Palestinian national or resistance member.”

Umm Alaa speaks about the damage to her beehives with a broken heart, as she considers the beehives as dear as one of her seven children. No one offered her compensation for the damage she suffered.

“Regardless of all the circumstances, I prefer to invest money allowed by Sharia and to steer clear from usury and interest-bearing loans, which is totally unacceptable,” Umm Alaa said.