How do large ultra-Orthodox families afford so many weddings? 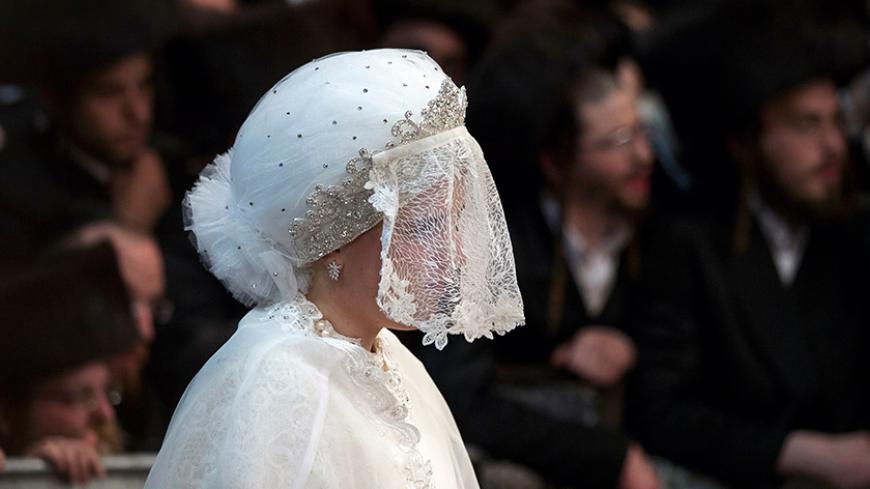 An ultra-Orthodox Jewish bride waits for the start of the "mitzva tantz," the custom in which relatives dance in front of the bride after her wedding ceremony, in Jerusalem, June 11, 2014. - REUTERS/Baz Ratner

More than 9,000 ultra-Orthodox couples marry every year in Israel. Many of them are in their early 20s, and by custom, the parents of the bride and groom cover all the wedding expenses as well as the costs associated with starting married life together. In practice, this not only includes such things as furniture, but also the cost of all, or at least part, of an apartment. After all, the couples have no money of their own. How do ultra-Orthodox parents manage to pay such costs? How can they marry off seven children — the average number of children in ultra-Orthodox households — when they are not wealthy or have no significant inheritance? The answer is complex, testifying to good financial management and the advantages of strong community.

In most basic terms, there are two components to how the ultra-Orthodox manage to marry off their children: a system of interest-free loans and restrained consumption (especially compared with the broader society). Yet, it cannot be emphasized enough that it is still a difficult undertaking for large segments of the ultra-Orthodox community, among whom many live in difficult, subsistence conditions.

Charitable loan societies, based on the Jewish obligation to assist others, are intriguing social institutions within the ultra-Orthodox community. There is hardly a building in heavily ultra-Orthodox areas without some sort of charity. These groups specialize in everything, from pacifiers to car racks to cribs to tools. Together, they offer almost everything imaginable. Their goods are also free, although some organizations take checks to guarantee that some loaned items are returned intact.

One type of charitable institution actually lends money. Dozens of such banks operate in the ultra-Orthodox community, lending sums large and small, at 0% interest and without commissions or other costs, to anyone who asks. Smaller loan societies deal with amounts up to $1,000, while the larger ones might lend as much as $15,000 to individuals. Charitable wealthy individuals provide the funding for these institutions, hoping to help individuals in need.

Less-familiar charitable institutions for personal savings operate alongside the free-loan societies. When the time comes for depositors to withdraw their money, they also have an opportunity to obtain a loan under extremely favorable terms. For example, the main savings society in the ultra-Orthodox town of Beitar Illit allows families to open a savings account for each child when the baby is born. The monthly deposit is limited to about $30 per child. Twenty years later, when the “child” is ready to marry, the accumulated sum ($7,200) is returned, and the depositor is eligible for a loan double the accumulated amount, at 0% interest and paid back in 80 to 160 monthly installments.

Yehoshua Breizel, a 47-year-old father of six, lives in Beitar Illit. He has already married off a son and a daughter with the help of charitable savings accounts.

“The hardest thing about marrying off a child is the cash needed around the time of the wedding,” he told Al-Monitor. “Putting aside 120 shekels [$30] a month per child is challenging, but I can manage it. As soon as I informed the charitable savings institution that my eldest daughter was getting married, they released 40,000 shekels [about $10,000] that I had deposited over the years. Furthermore, I got another 80,000 shekels [$20,000] as an interest-free loan with an easy payment plan.”

Breizel explains that the service actually saved him tens of thousands of shekels. Putting aside monthly savings cost him just $10 a month in management fees for all of his children. “That’s nothing,” he says. “If I would have taken a loan from the bank at the 12% annual interest rate that they offered, I’d have to pay the bank another 50,000 shekels [$12,700] apart from the original amount of the loan.”

Another charitable savings society that follows the same format takes deposits of up to 300 shekels ($76) per month. In addition to returning funds to depositors at the end of the savings period, the society also provides an interest-free loan of 240,000 shekels ($61,000) to be repaid over 160 months.

The main loan society in Beitar Illit explained that deposits are limited to just $30 per month for fear that if people saved more, they would have more money to withdraw, and the weddings they arranged would become too extravagant. A source at the society who requested anonymity told Al-Monitor, “We reached the conclusion that 120,000 shekels — savings of 40,000 shekels and an 80,000-shekel loan — is a reasonable amount for marrying off a child, including the cost of the wedding and dowry. If we were to allow people to deposit more, they would only waste more. This would be detrimental to our guiding principles of saving money and avoiding unchecked consumption.”

Despite all this, none of the savings covers the cost of buying an apartment for a couple. That sum is raised by borrowing from regular charitable loan societies or dipping into inheritances, pension funds or personal wealth. Nevertheless, with the cost of real estate in Israel skyrocketing over the past few years, fewer and fewer ultra-Orthodox families are buying an apartment for their children. With units going for more than 1 million shekels ($254,000) — even in ultra-Orthodox areas, where real estate had typically been relatively inexpensive — taking out a mortgage is not an option, because the monthly payments are too high.

The ultra-Orthodox loan societies point to the advantages of strong community. They are outstanding examples of how a unique banking system can benefit society while operating in the real world. What the ultra-Orthodox have discovered is that the real problem today is not the high cost of weddings, but the intolerable interest rates charged by banks and other lenders, who jack up loan costs significantly. So far, the State of Israel has allowed these alternative ultra-Orthodox banks to operate without any problems, even though their activities are unregulated. While there have been attempts over the past few years to impose regulations, the Bank of Israel, the country's central bank, has delayed the process.

As long as the charitable loan societies do not make a significant dent in the Israeli banking market, there seems to be no reason for the state to halt their operation. If, however, they expand, it is safe to assume that the authorities will step in. After all, such alternative banks could pose a threat to Israel’s credit market.