An Iran bill amendment could create an uncomfortable precedent for Arab allies of the United States. 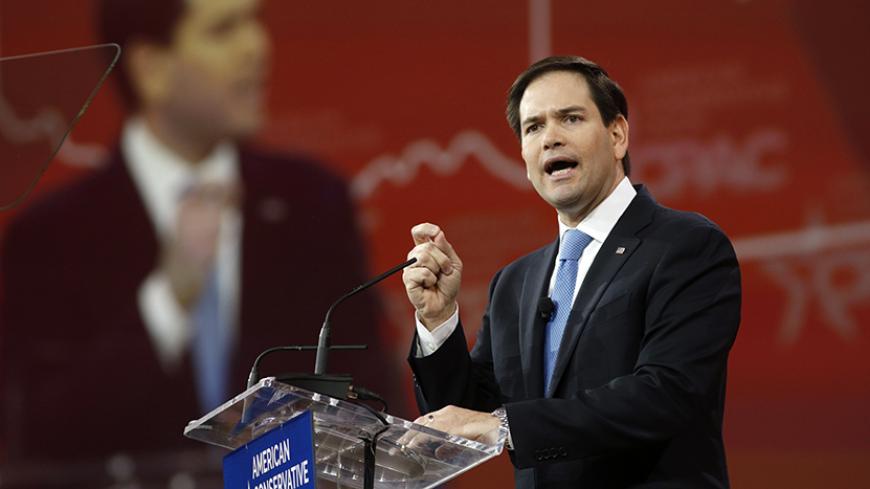 America's Arab allies are holding their breath as the Senate leadership ponders whether to cast aside a demand that Iran recognize the "Jewish State" of Israel as a precondition for a nuclear deal.

The amendment to the pending Iran legislation from Marco Rubio, R-Fla., is widely seen as an unacceptable "poison pill" gambit to kill the talks while boosting the presidential hopeful's pro-Israel bona fides. Lost in the partisan squabbling, however, is any real debate on the impact such a precedent could set for US relations with Arab nations, the vast majority of which won't recognize Israel until its conflict with the Palestinians is resolved.

"The criticism of that is that there are a bunch of countries in the Middle East that don’t recognize Israel’s right to exist," Rubio acknowledged Friday in a speech at the conservative National Review's semi-annual Ideas Summit. "Which is true. But none of them are trying to build a nuclear weapon."

Democrats are pushing Senate Majority Leader Mitch McConnell, R-Ky., to dispense with that amendment and others and vote on the underlying legislation to create a congressional review process for a final Iran deal. A vote on the bipartisan measure is expected this week.

Arab embassies and lobbyists around Washington privately acknowledge following the debate with some trepidation, particularly as Gulf states prepare to descend on Washington next week. The six members of the Gulf Cooperation Council have long balked at US law requiring Israel to have a "qualitative military edge" over its neighbors and are expected to demand more help battling the Islamic State and standing up to increasing Iranian influence, notably in Yemen.

"It is completely ironic that we want to require the Iranians to do it, and we're not going to require countries that we sell billions of dollars of arms to to do it," said Ilan Goldenberg, director of the Middle East Security Program at the Center for a New American Security, which has its roots in the Democratic Party.

Even Vice President Joe Biden addressed the discrepancy last week at the 30th anniversary gala for the Washington Institute for Near East Policy, a spin-off of the pro-Israel lobby group American Israel Public Affairs Committee.

"We did not precondition the deal on Iran renouncing its proxies or recognizing Israel," Biden said. "And we don't ask Saudi Arabia to recognize Israel. But we passionately believe that Iran must eventually do those things. That's not the deal.”

To date, only three out of the 21 members of the Arab League have recognized Israel — four out of 22 if one counts Palestine as a country. And one of them, Mauritania, severed relations after the 2008-2009 Gaza War.

The closest the Arab world has come to a wholesale acceptance of Israel was in the Saudi-led Arab Peace Initiative of 2002, which offered regional recognition in exchange for a two-state solution with Palestine on the basis of the pre-1967 borders. While Egypt and Jordan have recognized Israel as part of their peace treaties with the country, neither has recognized it as a "Jewish state," which carries implications for the rights of Palestinians inside Israel as well as for the descendants of refugees from 1948.

"We will never recognize the Jewishness of the State of Israel,” Palestinian Authority President Mahmoud Abbas reiterated at an emergency summit of the Arab League in November as Israel debated legislation to enshrine the country's "Jewish" character into law.

Israel in recent years has grown closer to a number of Sunni countries, notably Egypt and Saudi Arabia, because of a shared interest in combating Islamists and countering Iran. Recognition, however, remains a long way off and won't happen until a two-state solution is reached — something Prime Minister Benjamin Netanyahu has said won't happen under his watch.

"The political barometer for these countries, the Palestinian issue, is still hugely politically resonant, even if in terms of strategy. … They're more focused on Iran and extremism and [the Islamic State]," Goldenberg said. "With their publics, they can't recognize Israel unless there's a solution for the Palestinians."

Other lawmakers support pressing Middle Eastern countries to recognize Israel — but not as a precondition for bilateral ties.

"We're a friend of Israel, so we should be in the business of helping Israel find more friends in the region, rather than less," said Sen. Chris Murphy, D-Conn., the top Democrat on the Near East panel. "So I have no problem with our policy being one of strong encouragement that countries recognize Israel, and recognize it as a Jewish state."