In an interview with Al-Monitor, Palestinian Soccer Association Chairman Jibril Rajoub accuses Israel of harassing Palestinian soccer by preventing the free movement of players and the importation of equipment. 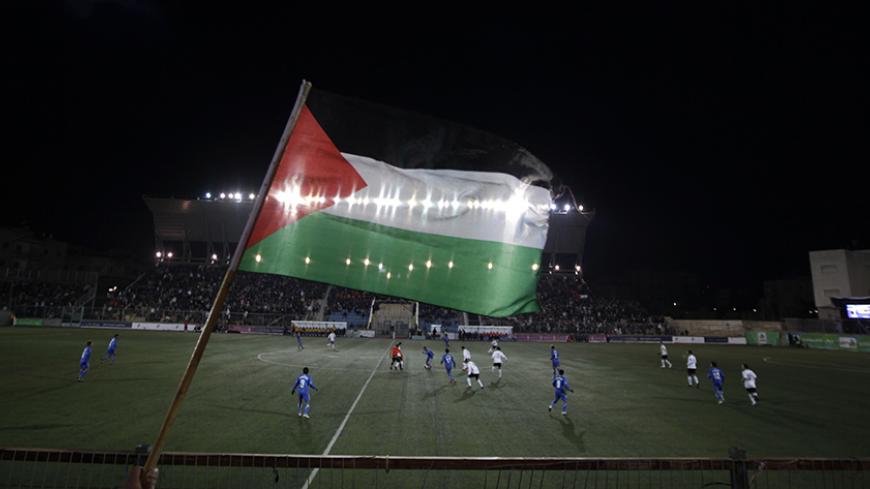 A Palestinian national flag is seen during the Olympic games qualifying match between the Palestinian and Thai national soccer teams at a stadium in the West Bank town of al-Ram near Jerusalem, March 9, 2011. - REUTERS/Ammar Awad

Jibril Rajoub, the chairman of the Palestinian Football Association (PFA) and one of the leaders of the Fatah movement, is convinced that the International Federation of Association Football (FIFA) will suspend Israel from the organization at the end of May. In recent months, Rajoub has been wielding tremendous pressure on FIFA Congress members who are scheduled to convene May 28 in Zurich to discuss the Palestinian Authority (PA) demand that Israel be suspended for what he calls its continual harassment of Palestinian sport in general and soccer in particular. A three-quarters majority of the organization's 209-member states is required to carry the resolution to suspend Israel.

In an interview with Al-Monitor, Rajoub says the Israelis believe that by virtue of being members of the Union of European Football Associations (UEFA) they can feel safe and protected, but that's a mistake. According to him, the Palestinians have already secured a majority to support Israel's suspension. The interview with Rajoub took place shortly after his return from Saudi Arabia, where he met with Nawaf bin Faisal, president-general of youth welfare from the Saudi Ministry of Youth and Sport.

"For years I've been trying to convince the Israelis to remove the obstacles hampering the development of sport in the Palestinian Authority," Rajoub said. "Together with Minister of Civil Affairs Hussein al-Sheikh, I met six times with [former] President Shimon Peres in a bid to remove the obstacles for hosting players and teams for friendlies and official matches within the Authority as well as with regard to the transfer of players between leagues. Israel has even been denying us sporting equipment that's needed to develop sport. These are the topics we wish to address with the participants at the FIFA Congress. I first raised the problems Israel has been causing us and its harassment of Palestinian sport at the FIFA Congress two years ago. I have to say that there was a consensus to condemn Israel and take measures against it. But an opportunity was offered back then to find acceptable solutions before any steps were taken. FIFA President Sepp Blatter proposed to come to the region and resolve the issue himself. He did come and met with senior Israeli sport officials as well as with senior political officials (including Prime Minister Benjamin Netanyahu in May 2014). But the Israelis aren't serious. Nothing has changed and all the promises have been proven to be hollow."

"Last year in Brazil I raised our plight again. UEFA President Michel Platini proposed to set up a committee that would look into the matter and resolve the problem. However, not only has there been no change but the situation has in fact gotten worse. The Israelis were condescending and offensive to us during all the encounters."

Rajoub:  They started telling the envoys, including the Cypriot president who was appointed to find a solution: "Who is this Jibril Rajoub? What stories is he telling you?" They all say don't believe the Palestinians, they're just making up stories. Now we are certain that we have no choice. Nothing is changing because of Israel's intransigence. And that's why we're raising it a third time at the FIFA Congress. This time I assure you nothing will stop us and prevent Israel's suspension from the organization's activities. I don't want to harm any athlete — neither Israeli nor Palestinian — but the Israelis can't go on behaving with condescension, hatred and racism, especially when it comes to something that's so bonding and essential as sport.

Al-Monitor:  Can you give some examples?

Rajoub:  I can list dozens of violations and violent behavior toward us, but let me give you an example I raised with Blatter. When Platini arrived for a visit, he was supposed to visit Bethlehem. Do you think there's a problem for an Israeli vehicle to get into Bethlehem? They made him do the crossing — a few hundred meters to the Palestinian side — on foot, as if he wasn't a dignitary. Platini sent us sporting equipment that Israel held up for 16 months. We had to pay $32,000 for its storage, but the whole equipment was worth just 18,000 euros [about $20,000]. And here's another example: Football teams from various Arab countries arrived [May 26, 2014] for official matches in the Authority. The Israelis prevented half of the footballers from entering through the Allenby crossing, citing security risks. It was only when Platini threatened to take measures that they opened the crossing at midnight on Saturday night and let everybody in. Isn't that enough to understand the hardship our sport suffers from the hands of the Israelis?

Al-Monitor:  Were you at any point in the past in touch with the Israeli Football Association (IFA)?

Rajoub:  When members of the IFA saw how international players were denied the possibility to play the matches, they should have protested in the name of sport and said it was unacceptable, but they remained silent. At the same time they sent Blatter messages saying that IFA was willing to help develop Palestinian sport only through Israel's official channels. And so you understand that they, too, are part of the Israeli occupation and nothing more.

Al-Monitor:  So in your opinion all the efforts to find a reasonable solution have run their course?

Rajoub:  All of them. Blatter, Platini and others have tried everything to convince the Israelis that a drastic change with regard to Palestinian sport must be made, but they've given up. The Israelis think that because of the Holocaust they have the right to do anything.

Al-Monitor:  And you're convinced that you'll have a majority to have Israel suspended?

Rajoub:  For sure. We ask to suspend Israel until it meets the demands that FIFA itself believes are basic rights. We have raised five detailed demands. Our first demand concerns the freedom of movement of the players, staff and match officials, within the PA, including between the West Bank and the Gaza Strip. The second one is the import of football equipment without hindrance or inspection by Israel's security officials. The third demand is the free construction of football facilities in the PA without hindrance or inspection of Israel's security officials. The fourth one, is that the football clubs established in West Bank settlements are to be permanently banned from IFA competitions. And finally, an unequivocal action of the IFA against any racist expressions toward Arabs and against apartheid [during the matches in the Israeli leagues].

Al-Monitor:  It appears that Israel is neither on edge nor concerned that the suspension resolution will indeed pass.

Rajoub:  Israelis remain unfazed by anything. But who isn't fed up with you? I came via the Allenby Bridge and the attitude toward me was humiliating. It's a disgrace. How long will they continue to humiliate us? I don't wish the Israeli footballers the suffering that our players go through. And I hope that the Israeli players will settle their score with their government and won’t come complaining later [once the suspension goes into effect]. The ball is in the court of the Israeli government.

Reaction of the Israel Football Association:

The State of Israel and its authorities are doing all they can to ensure full and independent sporting life in the Palestinian Authority. That said, security circumstances warrant early review of the requests submitted by the Palestinian Authority as well as inspection of the sporting equipment that is being shipped. The issue has been discussed several times by FIFA chiefs. It was decided to set up a committee consisting of a FIFA representative as well as a representative from the Israeli Football Association and a Palestinian representative with the sole purpose of streamlining the process. The memorandum that was agreed upon and by which we abide is circular No. 1385. To this end, FIFA President Sepp Blatter has met twice with Prime Minister Benjamin Netanyahu, thanking him for his action in this matter. [Jibril] Rajoub is taking advantage of the fact that elections for the organization's presidency will be held in the upcoming FIFA Congress and is trying to score a political achievement. A special investigator on behalf of FIFA president — the chairman of the Cyprus Football Association — has unequivocally asserted in his report that this is a political dispute between the countries and that the associations can do little to change it.

The investigator further added that only by complying with the FIFA circular will the sides get to where FIFA wants them to be. The only reason for denying a small fraction — if any — from those seeking entry on behalf of the Palestinian Authority is security related.

Moreover, Israel has granted entry to teams and national teams from enemy countries, all to the benefit of sporting cooperation. We deplore Rajoub's egregious choice to mix sport and politics instead of allowing football to be a bridge to peace. We are convinced that the FIFA Congress will not support the move that undercuts the organization's vision and its activities throughout the years.