The violent demonstrations of Ethiopian-Israelis is a signal to the leadership that the community will not take any more discrimination or abuse. 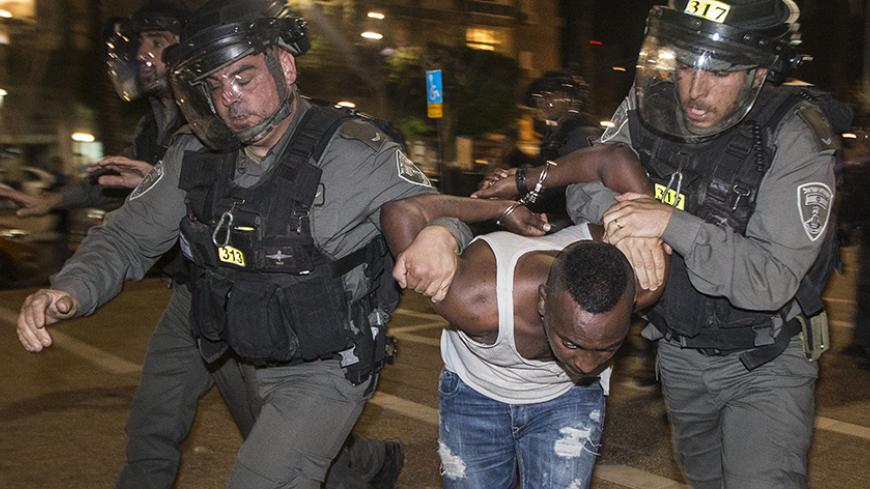 Israeli security forces arrest an Israeli man from the Ethiopian community in Tel Aviv during a protest against alleged police brutality and institutionalized discrimination, May 3, 2015. - Getty Images/Jack Guez

The May 3 demonstration turned Rabin Square in the heart of Tel Aviv into a battleground. As the protest reached its climax, Prime Minister Benjamin Netanyahu’s office attempted to restore calm by issuing a press release stating that the prime minister will be hosting an urgent discussion on the matter, with the participation of the leading representatives of the Ethiopian community. One such representative named in the statement was the soldier Damas Pakedeh, who was seen in a video last month being beaten by the police for no apparent reason. It was this very video clip that incited the current protests, which, in retrospect, are some of the most violent that Israel has ever seen.

Just as he did in the stormiest days of the social protests during the summer 2011, Netanyahu is taking rapid, point-specific steps to calm down everyone and restore order. He did the same thing after the elections, when he invited the senior leadership of Israel’s Arab population to his office. For the prime minister, this was a kind of public apology for his racist announcement on Election Day that “the Arabs are heading to the polls in droves.”

Netanyahu’s office has an orderly battle plan for events of this kind. His people organize well-publicized meetings with representatives of whatever group was hurt or is currently protesting, but only after carefully selecting representatives unlikely to cause a commotion. Netanyahu’s staff is fixated on finding representatives who will express their gratitude to the leader for deigning to devote some of his busy time to them. He promises them extreme empathy, all in front of the cameras, of course, and says that he will personally lead the effort to deal with the specific problems faced by that specific community, group or sector. If necessary, he even announces the establishment of a “committee to study the problem.” Then, when put to the test of time and results, very little, if anything, actually happens. Meanwhile, however, Netanyahu has succeeded in buying himself more time.

This time, however, it looks like Netanyahu’s methods won’t work. The Ethiopian-Israelis’ protests erupted only after their discontent had a chance to seethe in their community for over two decades. This makes the current wave of protests unlike any other social protest that Israel has ever seen before. These aren’t the fair-but-friendly tent city 2011 social justice protests of the middle class, which were more like Woodstock than anything else. This was a violent outburst by people who have nothing to lose, and whose alienation from the state runs so deep that they no longer play by the rules of the game.

The riots began April 30 in Jerusalem as Ethiopians vented their rage. They grew in intensity May 3 in Tel Aviv, so that if they are reminiscent of anything, it is the violent Wadi Salib riots in Haifa in 1959, during which Mizrahi Jews (of Middle Eastern origin) protested against the establishment. Over 50 years later, social networks have amplified the very mood of modern protests, along with the ability to organize. And they have intensified the spirit of protest among the disenfranchised. The video clip documenting random violence by the Holon police against Pakedeh went viral, setting off a powder keg of outrage. The riots in Baltimore provided inspiration, and groups on WhatsApp and Facebook laid the foundations of an emerging movement within just a few hours.

The leaders of these protests have yet to focus their efforts. Their demands remain unclear. Nevertheless, they still have the support of the masses, and in that conglomerate of individuals, each and every person has a personal tale of discrimination, exclusion, humiliation or brutality. For the most part, these stories tend not to be covered by the national media. In those rare instances where they did receive some recognition in the press, the shock waves were limited. Now, however, those very stories are fueling this new wave of protests.

The people behind the demonstrations are high school students and young people in their 20s and 30s, who were born in Israel. They grew up in the country’s most impoverished neighborhoods, in Ethiopian “ghettos” of sorts. They were forced into separate classes in school, and even when they served in the army, they were faced with institutional discrimination. The worst problem of all, however, is police violence directed against them. As we are learning, this phenomenon, or rather this method, is apparently so widespread that it has already burst into the media’s awareness.

Thousands of people showed up to the demonstration in Rabin Square in Tel Aviv. They blocked roads and threw rocks at police officers and vehicles, only to be met with attempts to disperse them using hoses, arrests and dozens of stun grenades. One of the demonstrators, a resident of Netanya, told Al-Monitor during a lull in the violence, “In the neighborhood where I live, the police arrest you for no reason as a matter of course. They ask you, ‘What do you have in your pockets?’ and undress you in the middle of the street to search you. If I ask a policeman to identify himself and show me his badge, they say, 'We’ll show it to you later.'” According to him, there is hardly a male in the Ethiopian community who has not experienced something like that. Another demonstrator, this one from Ashdod, added angrily, “I have a 3-year-old son at home. If something like that happens to him, if a policeman does something like that to my son, I swear that I will personally take it out on his family.”

In November 2014, the Knesset’s Interior Committee held an emergency debate following a series of violent acts committed by the police against Israeli citizens of Ethiopian origin. The participating Knesset members listened in shock to the testimonies that they heard. These began with a former Israeli-Ethiopian policeman who left the force after a female officer called him “black” and later received financial compensation, and concluded with tales of random violence. Nothing actually came out of all that. The same is true of all the plans and budgets that made the rounds over the years but ultimately came to naught. That is exactly what the state comptroller found in his report of May 2013, which reviewed the failure to absorb and integrate Ethiopian immigrants into Israeli society.

That report offered some harsh figures concerning the Israel’s Ethiopian community. At the time, there were some 120,000 Ethiopian immigrants living in Israel, making up 1.5% of the country’s total population. Yet although they make up such a small percentage of the total population, 52% of Ethiopian families and 65% of Ethiopian children live beneath the poverty line. According to the Israeli Association for Ethiopian Jewry, 30% of all minors serving time in prison are of Ethiopian origin.

Netanyahu is expected to discover that the “representatives of the Ethiopian community” who were invited to meet with him actually do not represent those lost Ethiopian youths born in Israel, who have been abandoned for two decades already. During a significant part of that time, Netanyahu himself served in key positions such as finance minister and prime minister. He bears personal responsibility for the establishment collectively shutting its eyes to this seething pressure cooker. Furthermore, the young people leading these protests are not subject to the authority of the established Ethiopian leadership. In fact, many of them feel alienated.

Former Knesset member Penina Tamano-Shata of the Yesh Atid Party was born in Ethiopia, and even she had difficulty communicating with those angry youth in an effort to calm them down. Once the scope of the violence was seen, and she learned that dozens of demonstrators had been arrested and injured in Tel Aviv, Tamano-Shata could not hold back her tears. “This is a frustrated and disaffected generation,” she told Al-Monitor. “They feel so alienated from the state that during the demonstration in Jerusalem, they waved Ethiopian flags. It broke my heart. Personally, I feel that I may have failed them too. Maybe I didn’t bang on the table hard enough.”

Describing the difficulties she had in connecting with some of the struggle’s leaders, she said, “There are groups of Ethiopian immigrants online, and the public isn’t even aware of it. We are talking about thousands of people still living in ghettos, not only in the impoverished neighborhoods but also in the social networks. They live in their own world, and that’s where the frustration is bubbling over. My generation still lives on stories of longing to reach the Holy Land. For me it was the fulfillment of a dream, which is why my identity is so obvious to me. While I confronted my own dilemmas over the years, the generation that was born in Israel is very confused. They are neither here nor there, so they get caught in a reality in which everything is black and white. The situation is so severe that they don’t even care if they die for the struggle. This generation is fighting and kicking, even against its own representatives.”

It is obvious to Tamano-Shata what Netanyahu must do now. She said there is no need for another committee or another report. All the plans are ready. She herself was a member of an inter-ministerial team that submitted an organized program to Netanyahu to deal with the enormous systematic problems faced by the Ethiopian community.

“The first thing that needs to be done is to clear out all the Ethiopian ‘ghettos’ and rebuild them,” she said. “The second thing is to ensure that any project that separates young Ethiopians from the rest of the participants be revoked. I wish someone would explain to me why Ethiopians are recruited into the army separately, and why they are segregated in schools and preschools. It all starts with the fact that they are taught that there is black and then there is the white of the country’s native population. There have been programs and budgets for years, but nothing ever dealt with the root of the problem. It was more like taking a painkiller to clear your conscience. That’s how they lost an entire generation.”