Iraqis need to build state, not just defeat IS

Iraqis cannot liberate their country from the Islamic State unless they are able to create a unified state representing all interests. 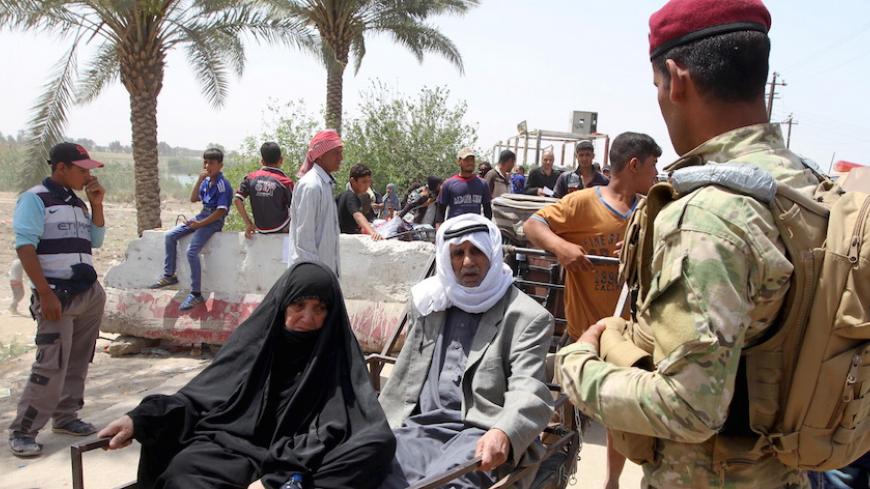 A member of the Iraqi security forces stands guard as displaced Sunnis, who fled the violence in the city of Ramadi, arrive at the outskirts of Baghdad, April 18, 2015. - REUTERS

Preparing for the post-Islamic State (IS) era is not premature — it is a fundamental issue that Iraqis, including the political and cultural elite, have already begun to address. The common consensus is that the next era will be different than the one preceding IS' occupation of nearly a third of Iraq.

Iraq stands at a crossroads, and the country’s decisions today will define the state of affairs after IS is driven out of the country. In this sense, the future depends on the Iraqi political milieu's vision of the future Iraqi state: Do these politicians have a specific plan for the building of a unified Iraqi state? Or is the plan predicated on the partitioning and disappearance of Iraq as we know it, after IS is gone?

In either case, the options must be discussed. For, if Iraqi elites are seeking to build a unified Iraq, they must restore a sense of solidarity in the current fight against IS. If important emerging societal components — such as the Popular Mobilization Units, the peshmerga and the Sunni clans — each went to war unilaterally against IS, that would signify that they have chosen not to restore Iraqi unity.

Simply put, the two military forces currently able to confront IS — the predominantly Shiite Popular Mobilization Units and the peshmerga — are incapable of ruling Sunni areas for any considerable period of time. This is due to the fact that, following the defeat of IS in any given area, combatants will need to return home, and the force that liberated the land will have to either live in harmony with the inhabitants of those lands or else further violence will emerge at the hands of organizations more extremist than IS.

This eventuality is clearly on the mind of Iraqi Kurdistan President Massoud Barzani, who repeatedly expressed his view that the peshmerga would not unilaterally enter Mosul. Instead, he expressed a preference to accomplish that task by training troops composed of Mosul inhabitants in camps located inside Kurdistan.

This point of view is noteworthy because it underscores an understanding of the nature of the internal, regional and international conflict — an understanding that must also be present when people in Baghdad talk about the Popular Mobilization Units’ desire to liberate Anbar and Mosul prior to the ripening of objective circumstances necessary to accomplish such a task.

Objective circumstances in Iraq require the establishment of a delicate balance between rehabilitating the Iraqi army and security forces’ capabilities — in their capacity as representatives of the country’s sovereignty — and the support received by volunteer troops, whether from the Popular Mobilization Units or the Sunni clans. This falls in the context of a "National Guard" or similar constructs, allowing the exploitation of those forces’ striking capabilities in concert with the peshmerga’s.

In this context, one can begin to talk about social and political solidarity aimed at liberating the land from IS without the loss of Iraq as a viable state.

The operative phrase in Iraq’s war against IS is the “concept of the state,” which is exactly why this war must be defined as one between state and nonstate, law and lawlessness, and dictatorship and extremism, as well as for democracy, social justice and human rights.

Iraqis cannot save Iraq unless they espouse the concept of state-building in their endeavors to liberate their country from IS. Any course of action that is fundamentally inconsistent with the concept of state shall mutate, at least from an international viewpoint, into a sectarian war where one faction tries to dominate the other. This outcome could potentially lead to the country’s disintegration, regardless of the ability of one sect to unilaterally deal a decisive blow to IS.

Other features can be added to the list of changes in the post-IS era. These include the state’s learning from the experiences of other countries that underwent internal conflicts and confronted extremist factions, despite the fact that IS represents an unprecedented extremist threat.

Learning from the experiences of others pushes us toward the path of reconciliation and forgiveness, and puts us on the right track toward shielding our communities culturally, educationally, socially and economically, from attempts to destroy the country on the part of individual groups claiming to defend the interests of their religious sects.