Although the Ministry of Education and the Commission on Human Rights in Qadisiyah province are working to introduce human rights principles in schools, the project lacks much-needed support from the state. 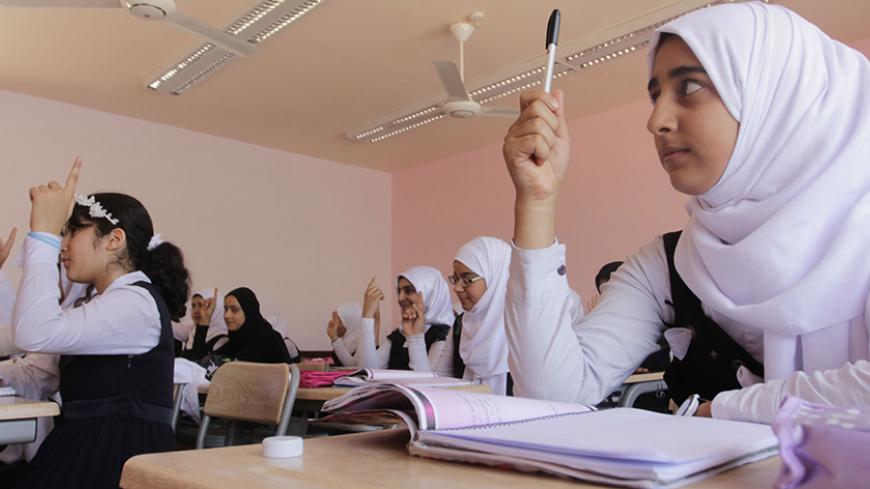 In a society where conservative religious trends and the rule of tribal law are on the rise, the dissemination of human rights principles is a difficult task. Often, interpretations of religious and tribal customs contradict with basic rights as stated by the Universal Declaration of Human Rights (UDHR), such as the freedom of opinion, the freedom of religious belief and other personal rights.

Since 2006, the Iraqi Ministry of Education has been trying, to no avail, to include human rights-related vocabulary into school courses, namely the constitution’s articles on women's and children’s rights.

On Feb. 23, Ministry of Education spokeswoman Salama al-Hasan said in a statement published on the ministry’s website that the project does not correspond to the required educational level in the human rights dissemination field. This is because the ministry has not developed an integrated program to teach human rights. Rather, it has included a number of simple human rights principles into ordinary teaching courses, such as language and math classes.

In a society where social movements and values ​​contradicting the principles of human rights are on the rise, such as in Iraqi society, it is absolutely necessary to teach and disseminate human rights principles on a large scale. This was confirmed by a number of human rights figures and parties, such as the parliamentary committee on human rights, which described the Ministry of Education's program as “modest” in its proposal in September 2012. The committee demanded that the Ministry of Education adopt a new curriculum, which was prepared by a number of British experts and academics, to be taught in schools at all academic stages.

It seems that there is an urgent need for a stronger human rights culture to be disseminated in Iraqi society, in light of the escalating violation of human rights in many social and political fields. Large segments of Iraq's population are denied fundamental rights to health care and education, and suffer from abuse, especially women and children.

Children in Iraq are often subject to domestic violence, and are often denied access to many fundamental rights on the level of basic care and protection.

Women are subject to violence and routinely denied the right to education and equal social standing. Human Rights Watch (HRW) published a study in March 2014, highlighting some of the threats to women's rights in Iraq.

The Commission on Human Rights in the province of Qadisiyah, 180 kilometers (122 miles) south of Baghdad, initiated the implementation of a human rights teaching program in primary school in February 2015. The program is designed to introduce primary school-aged children to some human rights that are stated in the UDHR, including the right to education, health care, work, housing and the freedom of movement. The program focuses on holding workshops for primary schools using modern methods such as screening films, documentaries and cartoons.

Given the conservative tribal composition of Iraqi society, raising some of the rights that are stated in the UDHR may be embarrassing and rejected by the parents, such as gender equality and religious topics. Thus, the projects and initiatives to teach human rights in Iraq avoid going deep into such principles, and limit their work to the definition of the basic principles that do not oppose the prevailing religious and social values ​​and principles.

Such an orientation is being welcomed in Iraqi society, according to Attar. He said that the workshops held by the Commission on Human Rights in Qadisiyah have reached villages and rural areas, such as al-Bair and al-Shamiya, and are widely welcomed there. He added that the lectures that were given by the Commission on Human Rights to uneducated women and girls in those rural areas were welcomed by their parents.

Yet, the scope of dissemination of human rights culture will not achieve the required objective in the foreseeable future. Human rights in Iraq continue to be violated, as international organizations, such as HRW confirmed. In the World Report 2015, HRW said human rights conditions for women and children in Iraq deteriorated.

A more comprehensive program is therefore required and needs to be promoted in all life aspects in Iraq, including in schools. This is why Attar hoped that the rest of the Iraqi provinces follow in the footsteps of Qadisiyah province and teach human rights in schools, in the hope of achieving the desired goal.

The implementation of a comprehensive project, however, requires the state institutions’ wide support to be disseminated on a large scale in the country. In the absence of such support, it will be difficult for individual initiatives to make this project a success.