Reassessing consequences of occupation in Iraq

According to interviews conducted by Al-Monitor, the British and US occupations of Iraq might, arguably, have positive repercussions on the country. 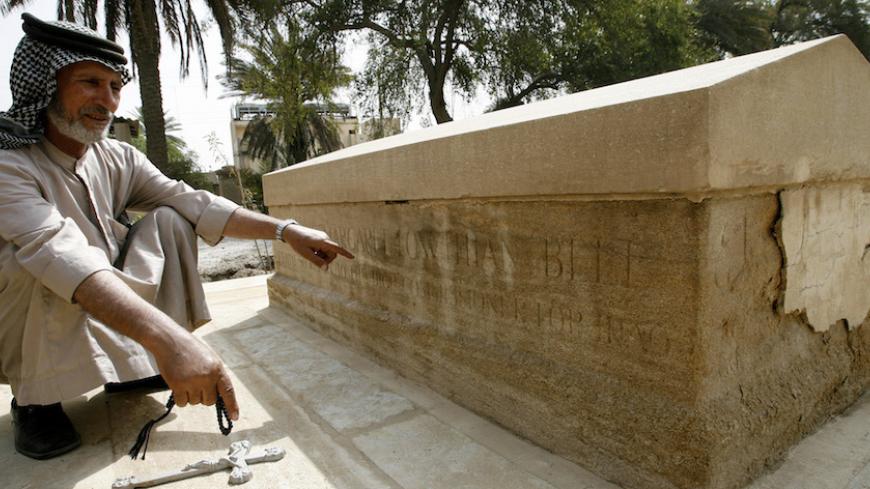 BAGHDAD — Evidence of the two occupations that Iraq has experienced — the British occupation at the end of 1914 and the US invasion in 2003 — can still be found in the country's cemeteries and bridges, and the gifts, souvenirs, medals, weapons and military suits kept by Iraqis. These objects now hold a symbolic value for Iraqis, and they stir up mixed feelings: positive feelings in regard to the exposure to and alliance with developed countries, and negative feelings that only see in these invasions black pages that must be turned.

The British soldiers’ cemetery in Al-Wazireya region in Baghdad dates to 1914. Twenty years ago, it looked like a European cemetery, with its green spaces, plants, trees and graves. People visited it, especially students. But now it is abandoned, and some gravestones are ruined, not to mention that the plants and trees are no longer cared for. Visitors are rare these days, too. This landmark brings back memories of a pivotal event in the history of Iraq. It can be considered a tangible document on which are written the names of British and Indian soldiers who perished during World War I, including the leader of the British campaign, Lt. Gen. Frederick Stanley Maude, who died in 1917 in Iraq and was buried in this cemetery.

Al-Monitor paused at the grave of British historian and writer Gertrude Bell, who was dubbed “the maker of kings.” She worked as an adviser to British Chief Political Officer Percy Cox in the 1920s, and she died in 1926. The past that historians and political writers dwell on is right here, under these marble stones.

Why has this place been neglected, and why does no one visit it anymore?

Author and Iraqi historian Qasim Mozan, from the state-funded Iraqi Al-Sabah newspaper, said, “The reason behind this neglect is the preoccupation of the state and society with past wars and the current deteriorating security situation. Most people are also busy trying to make ends meet, while others see the place as a symbol of the occupation. Others refrain from visiting this cemetery for religious reasons, if their sect dictates it.”

Mozan added, “The British occupation of Iraq must be reassessed far from slogans. This occupation moved Iraq from backwardness to building a fellow state to the UK in terms of administration, ministries, parliament and establishment of civil institutions.”

Civil activist Ahmad Makki, who worked in the services sector between 2005 and 2007 with the US forces at the US Kalsu base in Babil, has kept photos of himself with US soldiers.

He told Al-Monitor that he still fondly remembers those days and wishes he could have kept in touch with his American friends. “Iraqis lost several opportunities to benefit from Americans in the field of setting up civil society and human rights,” he said. He added that they could have benefited from the US presence and that “the US withdrawal from Iraq was premature.” Makki showed a medal he got from an American soldier, which was engraved with his name, Max. “I was always afraid of being accused of colluding with the Americans during the security strike in Babil. But people currently realize how wrong it was not to take advantage of the US expertise,” he said.

In the same context, Saad Hamid, a former soldier who worked with the US forces in 2006 in Beit al-Wazir camp in Babil, told Al-Monitor, “I still have a military uniform and civilian clothes that an American soldier gave me as a gift.”

Researchers and historians demanded the reconstruction and rehabilitation of the war cemetery in Amarah city, 200 miles (320 kilometers) southeast of Baghdad, which was inaugurated in 1914. In the cemetery, considered a historical heritage site, lie the bodies of 5,000 British soldiers who participated in 1914 in occupying Iraq.

Sheikh Abdel Hussein Amir from Babil told Al-Monitor, “Many truths were lost amid the chaos of ideological and politicized media. The Iraqis were portrayed as ungrateful people who forgot that they were saved from a dictatorship.” He said that he believes “the Iraqi people, on the contrary, are grateful to the countries that saved them from dictatorship and injustice. But, just like any other people, they do not want a permanent foreign presence on its territories.”

He added, “Building strong ties with the United States and benefiting from its technological and scientific development will be to Iraq’s advantage. … Many Iraqi youths still cherish memories of working with US employees and soldiers and keep photos, letters and souvenirs."

Author Fouad Nasser Ibrahim from Kut, roughly 105 miles (170 kilometers) south of Baghdad, referred to a landmark that reminds Iraqis of the British occupation: the Kut war cemetery for English soldiers, established in 1914. He said the cemeteries were “well-kept gardens filled with trees, in which flocks of birds nestled and chirped in the 1940s.” However, “due to neglect the cemetery has become a garbage dump, for the time being.”

Ibrahim said that Iraqis honor the dead and noted, “These soldiers have been lying peacefully since [World War I], and they will remain so as long as they are far from the Islamic State’s grip.”