Eid al-Adha: a time for Iraq to remember its war dead

The religious duty of visiting the dead on holidays has a special meaning for Iraqis, as many of them have lost loved ones in successive wars since the 1980s. 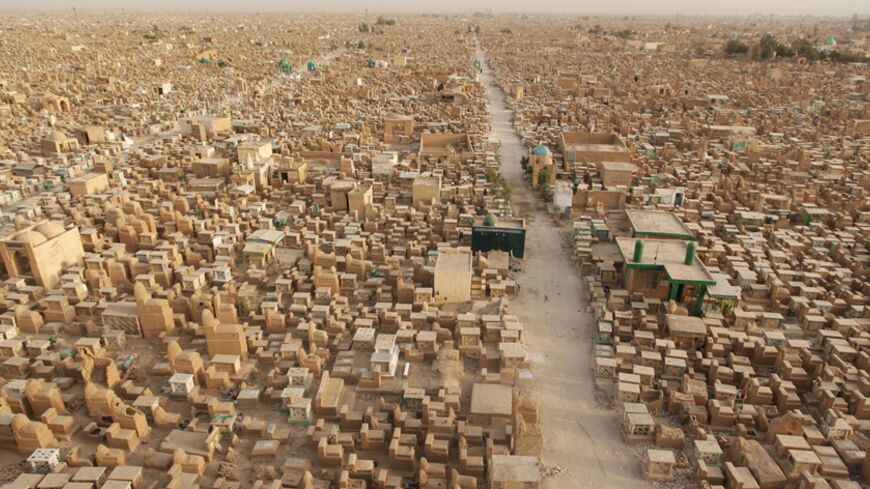 The Wadi al-Salaam cemetery in Najaf, south of Baghdad, is seen in this general view taken April 1, 2013. - REUTERS/Haider Ala

NAJAF, Iraq — Umm Issam, 51, believes that her husband, who was killed during the 1990 Iraqi invasion of Kuwait and was buried in the Wadi al-Salaam cemetery in Najaf, 160 kilometers (100 miles) south of Baghdad, “expects” her every Eid. He would be sad if she were late to visit.

About two years ago, Umm Issam could not make it on time to weep and pray at his grave, and she saw his reproachful ghost in her dreams. Ever since, she has been visiting the cemetery regularly, especially on religious holidays.

Umm Issam’s case resembles that of thousands of widows who lost their husbands during the different wars in Iraq since the 1980s.

In the Wadi al-Salaam cemetery, dozens of cemetery counselors, undertakers and merchants selling flowers, perfume, water and juice prepare to welcome the families, friends and relatives of war victims during Eid al-Adha.

Undertaker Hassan Majid told Al-Monitor that in Najaf, “most visitors know where their relatives are buried. Others find that harder and need a guide.”

Majid trained five assistants to familiarize themselves with the cemetery and help with the needs of visitors. “The Wadi al-Salaam cemetery represents a source of living for dozens of families from Najaf,” he said.

Ali al-Yassiri, a young vendor who sells incense sticks, written prayers, flowers and candles, works late and wanders around the gravestones. “Holidays are a good source of income,” he told Al-Monitor.

“The victims of violence, armed operations and battles have not decreased since the 1980s. The division of the cemetery is the clearest proof, as there are masses of victims who died during the former regime’s wars, the Iraqi invasion of Kuwait and the post-2003 acts of violence and strife,” he said.

A writer and researcher on Iraqi social affairs, Hussein al-Husseini told Al-Monitor in Babylon, “Under the cemetery’s soil, an entire Iraqi generation is buried due to the wars in this desert. Most of the deceased are innocent victims of pointless wars.”

Inside the cemetery, Abu Ali stands next to the grave of his son who was killed in 2006 in a blast in Baghdad. He told Al-Monitor that he “had to visit the grave before the Eid because he had to travel to Jordan for the [medical] treatment of his sick wife.”

In front of the grave stood the Quran reciter, reciting verses over the souls of the dead in return for symbolic rewards. He told Al-Monitor, “Visiting graves is a virtue encouraged by Sharia because it reminds people of Judgment Day and [thus] enriches their life on earth.”

Abu Ali burned incense sticks and fixed them in the sand. The sight of numerous adjacent graves is enough to give an idea of the size of the victim population, most of whom are youths who died throughout more than three decades of war.

Both Sunnis and Shiites consider visiting graves during holidays an inherited religious and social ritual that many individuals should follow, and which many feel guilty if they fail to practice.

While some prefer to visit cemeteries unaccompanied, others go in groups. In both cases, they have the same purpose, which is to visit their loved ones under the soil of Najaf, which is considered holy for Shiite Muslims.

Iraqi families insist on burying their relatives in a certain area so that it becomes reserved for them. Ihsan al-Hali told Al-Monitor in Babylon, “[My] fourth great-grandfather is buried in the family cemetery, which accommodates around 40 graves of dead people, including those who died during the Iraqi-Iranian war and their uncles, aunts, mothers and grandfathers.”

Hali rented a van that can fit around 20 passengers and prepared the meals, desserts, fruits and alms to distribute them to the needy. Families set out on the first morning of the Eid to the Wadi al-Salaam cemetery.

Researcher Makki al-Sultani, who is from Najaf and who passes by Wadi al-Salaam cemetery daily, told Al-Monitor, “The cemetery resembles a historical graveyard containing the lives of Iraqis, their path and its end, and celebrates the burial of hordes of Iraqis daily.”

Sultani said, “The cemetery, which dates back over 4,000 years, covers a wide surface area estimated at more than 15 square kilometers [6 square miles], and it is expanding gradually.”

He added, “Many horrible stories were buried in this cemetery, along with their victims. The former regime’s security guards used to accompany some of the victims in the funeral procession to avoid chaos and revolutionary acts.” That was his story, too, since many of his rebellious relatives were executed.

Sultani described the cemetery as “the memory of the ongoing Iraqi wars.”

Writer and scenarist Sabah Atwan, who has depicted social observations through dozens of plays, told Al-Monitor over the phone from Baghdad, “On Eid al-Adha, Iraqis commemorate the people whose blood was shed during the flaring periods of conflict. These wars left psychological damage that cannot be repaired with candles lit over the graves of the deceased.”