New plans to increase the ceiling for mortgages in Iran creates unnecessary bureaucracies and is not enough to stimulate demand in the housing market. 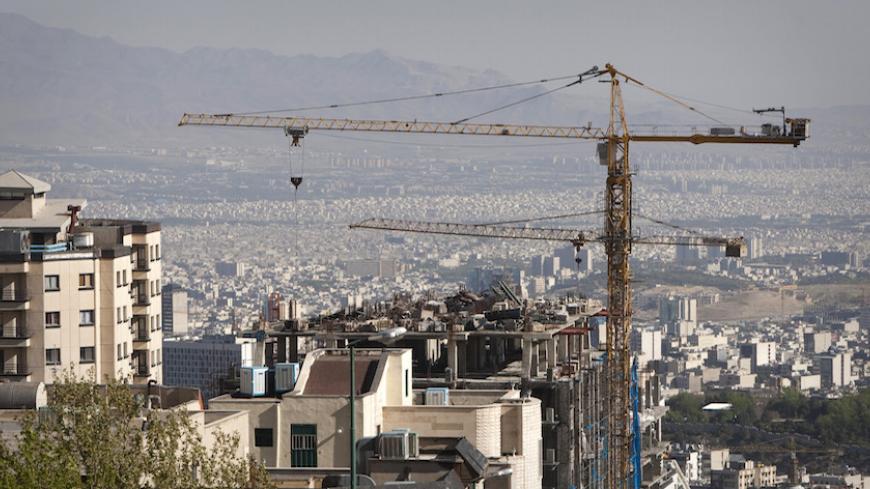 Construction cranes work on a high-rise building in the foothills of the Alborz Mountains in Tehran, April 15, 2010. - REUTERS/Caren Firouz

As demand picks up, so will productivity; and boosting bank lending is the best policy to stimulate demand in the housing sector hit hard by the recession in the past couple of years — that was an argument raised by Iran’s Ministry of Roads and Urban Development 18 months ago when it proposed a hike in mortgage loans. The Money and Credit Council, the highest policymaking body of the central bank, eventually agreed May 19 to almost double the borrowing limit for first-time buyers in Tehran to 800 million rials ($24,000 at the market exchange rate).

Another significant decision made by the council was the de-monopolization of the mortgage market. Since 2008, Bank Maskan had been the only commercial bank authorized to give housing loans. Now 21 other lenders are free to join the club. However, as proposed by the ministry and confirmed by the council last week, a fund dedicated to helping home buyers — "housing deposit fund" — must first be created in banks. Under the second approval, non-first-time buyers would receive maximum 600 million rials ($18,000) in loan from any commercial bank in Tehran. If applicants live elsewhere, in the cities categorized as "large" or in "other urban areas," they may receive 500 million or 400 million rials ($15,000 or $12,000), respectively.

Despite the rise in mortgage ceilings, observers believe serious challenges are still on the way of potential applicants. Under the new approvals, first-time buyers living in Tehran, large cities (with population of more than 200,000) and “other urban areas” (towns) need to make a deposit of 400 million, 300 million and 200 million rials ($12,000, $9,000 and $6,000), respectively, in Bank Maskan for at least a year to become eligible for receiving the maximum amount of loans. That is a distressing condition for low- and middle-income households and additionally would mean that applicants should wait for as long as 12 months even if they decide to open a deposit right away. The new policy, therefore, cannot lead to immediate demand stimulation as expected by advocates.

According to Ali Asghar Mir Mohammad Sadeghi, credit deputy at the central bank, the resources needed for first-time buyers’ mortgage loans are to be provided from the repayment of loans to the applicants of Maskan-e Mehr Project, a housing scheme started in 2011 aimed at building around 2 million housing units for low-income people across the country. Sadeghi noted that the resources will only be enough for 84,000 applicants during the seven-year period, while 5.3 million tenants across the country can potentially apply for the loans, with 2.5 million being categorized as low-income.

First-time buyers are given not more than 12 years to repay the 14% mortgage loan. With the minimum wage per month standing at 7 million rials ($215), critics wonder how it would be possible for Tehran-based low- and middle-income households to afford 11.5 million rial ($350) monthly installments?

The approvals put two conditions for first-time buyers to receive the maximum loan: they need to buy apartments no more than 3 years old that are no larger than 75 square meters (807 square feet). Given the average price of an apartment per square meter in Tehran — 38 million rials ($1,150) in the month ending April 20 — a 75-square-meter apartment costs 3 billion rials ($87,000), nearly quadruple the value of the loan, while ideally a housing loan should cover at least 80% of the home's total value. For homes purchased by non-first-time buyers, the mortgage loan-to-value ratio would be lower, which is seen as a lower risk to the lender.

Thus, as Deputy Minister of Roads and Urban Development Hamed Mazaherian has indicated, the new decision will only have a "gradual" impact on the market and is unlikely to significantly impact supply.

At best, the move could "prevent the sector from sinking further into recession," said Mostafa Behzadfar, a faculty member at the University of Science and Technology. He believes there already is a “surplus of supply” in the housing market since the urban population has been in decline since 2005. "The mortgage ceiling increase would be helpful only if home builders start focusing on construction quality," Behzadfar said.

With major economic and political issues yet to be addressed, a substantial, long-lasting impact on the supply side is unlikely to be seen in one year's time, but a temporary rise in home prices in Tehran and nine other cities (with a total population of 21 million) could be expected because of the psychological effects of the central bank decision. For towns, however, the price-raising effect might be more significant and long-lasting as the loan can cover a major part of an apartment’s value, which is good news for the supply side in small cities.

With the newly unveiled mortgage plan, Abbas Akhoundi, the minister of urban development, announced that commercial banks can act as a mediator between home buyers and builders in the pre-sales market, a complementary initiative that could help boost supply in a more practical way.

Ministry officials, who seem to have been overactive recently in offering solutions to the housing sector, believe this time that the most important factor disrupting the market has been the deep mistrust between the two parties, an obstacle that would be addressed if banks play as a trustee. The mechanism, which is something like what happens when a letter of credit is used, would let a commercial bank to provide a guarantee that the home builder/seller receive payment in full as long as the conditions of the sale are met. But in this process, the bank does not need to cover the costs on behalf of the buyer since the buyer makes payment in advance; in return, the bank agrees to supervise the whole building process, on behalf of the buyer, to avoid any fraud.

The initiative, if it does not lead to bureaucratic paralysis, could become a more attractive solution than the new mortgage plan, as there are thousands of households eager to buy a home — at a lower price through a pre-purchase process — if they are assured no risk will be posed to their capital.

Shahriar Shaghaghi, a housing market expert, told Iranian media that Iranians "are already tired of bureaucracy" and that the new ministry decision, "if it does not end up meaning more bureaucracy, would facilitate trust." But, he emphasized, "The government needs to act with transparency as it reforms the pre-sales market, since numerous complaints of losses from buyers have made people more cautious."