A proposal by some Iranian parliament members designed to help renters could leave them locked out instead. 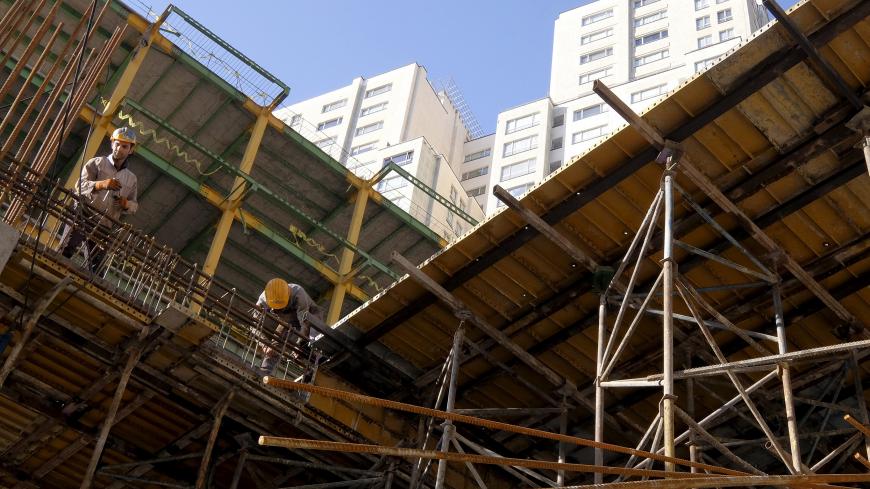 Laborers work at the construction site of a building in Tehran, Iran, Jan. 20, 2016. - REUTERS/Raheb Homavandi/TIMA

Home prices in Tehran more than doubled in the quarter that ended June 21 compared with a year earlier, after a prolonged period of relative price stability in the properties market.

Extreme fluctuations in the markets for alternative assets like gold coins and currency also caused residential property prices to skyrocket, as investors looked to hedge their capital against value loss. This was largely fueled by Washington’s unilateral exit from the Iran nuclear deal in May 2018.

According to a report published June 25 by Iran’s Islamic Parliament Research Center (IPRC), total demand for housing units in Iran is expected to stand at around 800,000 each year. Meanwhile, the average supply of homes has dropped to 350,000 units per year.

According to the report, the average price of 1 square meter (roughly 11 square feet) of home space across the country is calculated at 110 million rials ($2,610). Consequently, would-be home buyers would pay about 8.2 billion rials ($194,750) for a 75-square-meter (807-square-feet) residential unit. As the average Iranian’s minimum monthly salary is about 15 million rials ($356), it could take many decades to pay off a mortgage. Therefore, demand for apartment rentals has surged in recent years.

Average salary increases in Iran are far below the inflation level. Since economic stagnation is set to continue, average Iranians have a very slim chance of being able to afford even a small home. Bank loans would be a viable option, but the current interest rate ceilings aren’t conducive to financing home purchases.

High interest rates and the inadequancy of mortgage loans have reduced the demand for mortgage bonds on the Iran Fara Bourse (IFB) to a large degree. Mortgage bonds are among the few financial instruments available for the low-income population to buy homes, and the plunging demand has been continuing due to the punishing rise in property prices. Consequently, the value and volume of trades of such financial vehicles have sharply declined to 35% and 13%, respectively, since the beginning of the Persian calendar year on March 21 up to July 10.

To determine rental rates, property prices are the most important component. However, bank interest rates, inflation rates and changes in parallel market returns have also always been key players in calculating rent prices. Currently, unlike in previous years, landlords prefer to receive higher monthly rents rather than large down payments, called "rahn."

Rahn is an unusual rental system in Iran in which a renter lends the landlord a sizable sum upfront for a residential lease agreement. The landlord uses the money as an interest-free loan and returns the principal when the contract finishes. Traditionally with rahn, every 10 million rials ($237) is considered equal to 3% of monthly rent. But with banking interest rates at more or less 20% annually, this equation is no longer viable. Landlords are more inclined to discount the rahn amount to 2% per month, on par with interest rates allotted to term deposits.

To assist tenants facing budgetary problems, housing sector pundits have proposed various solutions. Some believe the government needs to raise the quantity of housing facilities. Some argue speculative activities ought to be controlled in this market before mortgage loans levels are raised. And some believe the government should reduce the attractiveness of hoarding empty homes by levying heavy taxes as a way to boost the home supply.

Addressing this issue, some parliament members have drafted a plan designed to reduce the financial burden on home renters. But this scheme seems likely to worsen tenants’ conditions. The plan — called "Establishment of Home Leasing Companies” — would menace the rental market if it is implemented. Donya-e-Eqtesad daily lists six imminent threats of setting up these companies, saying they would push up rents, complicate the direct relationship between landlord and tenant, remove landlords from the market, subjugate property rights, threaten supply and, ultimately, stoke volatility in the rental market.

According to the IPRC report, there are now about 23 million residential units in the country, with more than a third of them available to tenants. One glaring setback of the parliament’s scheme is that if landlords are pushed to rent their homes solely through intermediaries, they might withdraw from the rental market. This would inevitably lead to a shortage of residential units and, consequently, hike rental prices.

Meanwhile, there is a strong likelihood that intermediaries would engage in speculative activity to profit from loopholes created by the plan. In the final analysis, this casts doubt on whether the plan would ever meet its primary goal of decreasing rental rates. In fact, the plan is perfectly poised to have the opposite effect.

In addition, regardless of capital gains resulting from rising property prices, the overall return on setting up home leasing companies — assuming they are similar to their foreign counterparts — is likely to be less than 10%. That kind of yield is less attractive than the risk-free interest rate secured by the banking system.

Apparently, the government has been under public pressure to take immediate action to organize rental markets. But doing so appears to be a tall order. It would require inhibiting speculative activity and exerting leverage on empty homes and on capital gains earned from property transactions as well.

The measures applied by the administration at present are reminiscent of Iranian officials’ previous failed policies in this sphere, as such plans were drafted without proper feasibility studies.