Khamenei: We will not negotiate under 'specter of threats'

Iran's Supreme Leader Ayatollah Ali Khamenei's harsh words were likely a response to comments by US Vice President Joe Biden and Secretary of State John Kerry, who have suggested that the military option is still on the table. 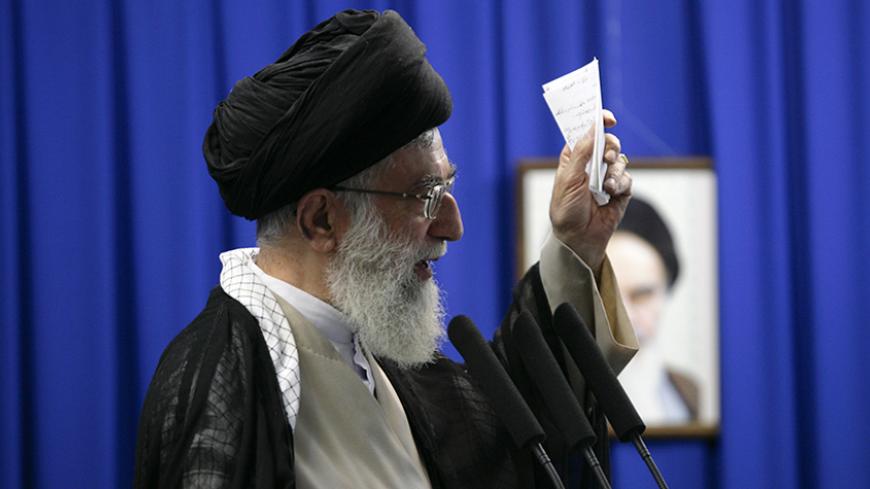 During his speech on May 6, Iran’s Supreme Leader Ayatollah Ali Khamenei responded to comments by US officials about the possibility of a military confrontation should the nuclear negotiations between Iran and members of the UN Security Council fail. The comments were some of the harshest yet by the supreme leader, who has the final say on the nuclear program.

“I’ve repeatedly spoken about the nuclear talks. What we’ve needed to say we’ve said, but everyone should pay attention — our Foreign Ministry officials, various officials, the elite of society: If a nation cannot defend its identity and greatness against foreigners, certainly it will be struck. There is no return; it has to know the value of its character,” Khamenei said.

He continued, “The enemy makes threats. In these last few days, two American officials made threats. We won’t even mention those who don’t have important posts; these are [top] officials. I don’t understand what meaning negotiations under the specter of threats have. For us to negotiate under the specter of threats, like a sword above our head, the Iranian nation is not like this. The Iranian nation will not tolerate negotiations under the shadow of threats.”

Khamenei went on, “Why do they make threats? They say if this doesn’t happen or that doesn’t happen they may take military action. First of all, the hell you will. Secondly, I told the previous president of the United States, the era of hit and run is over. It’s not like this that you will hit us and run. No. You will get trapped and we will follow you. The Iranian nation will not set free someone who wants to invade. We will pursue.”

Khamenei did not say to which two US officials he was referring. The United States has been very active in pursuing a nuclear deal with Iran under President Barack Obama. At the same time, it has always maintained that if the talks fail, a military option to prevent Iran from obtaining a nuclear bomb would remain on the table. On April 30, Vice President Joe Biden, while defending the president’s nuclear policy with Iran, praised Obama's explicit policy that “All instruments of American power to prevent … a nuclear-armed Iran” would be in place. While in Israel on May 3, Secretary of State John Kerry also said that the United States “has designed and deployed a weapon that has the ability to deal with Iran’s nuclear program.”

Addressing the United States, Khamenei said, “You do not need the negotiations less than we do. Yes, we would like the sanctions to be removed, but if the sanctions are not removed, we can manage ourselves in other ways. This is proven.” However, Khamenei believes that the United States has a “real need for the negotiations. For their record, they want to present one fundamental point and say that ‘We brought Iran to the negotiation table and imposed on them various issues.’”

To Iran’s nuclear negotiators, he said, “Continue the negotiations, which observe the fundamental red lines, and if you reach an agreement under this framework there is nothing wrong with it. But under no conditions should you accept an imposition, force, humiliation and threats.”