What will happen once Iran's assets are unfrozen?

The repatriation of Iran's $120 billion in blocked assets must be paced and rational to avoid negative consequences for its economy, and Tehran must make investment decisions based on technocratic approaches as opposed to political and ideological ones. 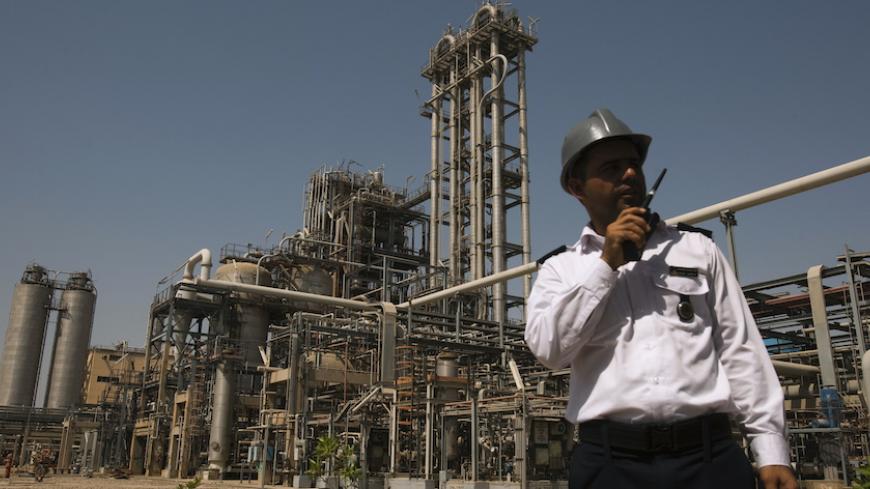 A security guard stands in front of the Mahshahr petrochemical plant in Khuzestan province, southwest of Tehran, Sept. 28, 2011. - REUTERS/Raheb Homavandi

One of the issues currently debated among Iranian decision-makers and economists is how the country will use its sizable hard currency holdings once they are released by international banks in the process of sanctions relief. There are different calculations regarding Iran’s frozen assets in international accounts, but the most reasonable figure is $120 billion. Considering that the country’s total trade volume in 2014 was about $160 billion, it is clear that Tehran will have to make a few strategic choices on how to utilize the released funds so that it does not undermine its overall economic development.

So far, since the implementation of the Joint Plan of Action (initiated in January 2014), the Central Bank of Iran (CBI) has repatriated some $25 billion of released funds in the form of cash or gold back to the country. According to Valiollah Seif, the CBI governor, these funds have been used to regulate the domestic currency markets and provide for a stable exchange rate. However, experts agree that a quick repatriation of the remaining funds — an intuitive move to escape future sanctions — would increase liquidity and put pressure on the current value of the Iranian rial. Any repatriation should be paced and rational to avoid negative consequences for the economy.

Another meaningful strategic choice could be the provision of those funds for imports. For example, in some specific cases (such as Iranian funds that have been blocked in UK banks), Tehran seems to have opted for dedicating the funds to the importation of specific medical goods to respond to market requirements. This practice notwithstanding, the Iranian authorities need to be careful, as past experience has shown that importers tend toward importing consumer goods, which would have limited impact on the needed job creation and capital formation. The best example of this behavior pattern is the excessive importation of luxury cars during the Mahmoud Ahmadinejad years, flooding Tehran’s streets with little long-term benefit to the Iranian economy.

Even a concentration on the importation of capital goods would potentially be misplaced, as the country already possesses a substantial industrial base that is underutilized. In fact, it is much more meaningful to be very selective in what Iran imports and focus on improving efficiency and modernizing the already existing industrial and infrastructure base. A careful importation policy would also be more supportive of the local industry. At the same time, once sanctions are lifted, Iran will potentially also increase its overall exportation performance (especially crude and petroleum products) by up to $20 billion a year, meaning that the country will have no shortage of hard currency for its ongoing importation needs. The author’s calculations indicate that Iran could have an annual trade surplus of $50 billion at the current crude oil price once sanctions are lifted.

As such, any of the routes that may transfer those released funds back to the Iranian economy would potentially be harmful in economic terms. However, if Iran opts to invest the bulk of these funds on the international market, then there would need to be a strategic investment plan so that the Iranian economy as a whole can benefit.

Some may argue that Iran should use those funds for the massive investments required in its oil and gas sector — an estimated $230 billion in a 5-year period. But from a macroeconomic point of view, it makes more sense to incentivize foreign and domestic companies to engage in such investment projects to attract the latest technologies and management systems into those undertakings. Allowing the government to run some of these needed investment projects with its own funds will create an outcome that Iran has experienced again and again: corruption and weak medium- to long-term performance of the actual projects, as well as failure by the government to act as a regulator of targeted industries.

Consequently, Tehran will need a more creative strategy for utilizing the released funds. It may opt to allocate the resources to various internationally active funds that would enhance the country’s international asset base and help its economy become more international. Similarly, Iran could opt to invest in a number of strategically located refineries and/or petrochemical plants that could become long-term customers of Iranian crude, hence reducing Iran's vulnerabilities to crude market forces. Tehran could also look for investment opportunities in the region in gas-based industries, such as liquified natural gas (LNG) plants, which would become long-term buyers of Iranian gas and at the same time introduce Iran as a player in the international LNG market. Furthermore, considering the growing demand for modern equipment in the country’s industrial and agricultural sectors, Tehran could devise an investment strategy in international companies in the fields of engineering, machinery and modern solutions.

The above examples are just a few ideas for a potential strategy in which Iran would use its existing funds to create a chain of value-added activities to diversify its economic base and become a more international player in some strategic commodities. However, one emotional obstacle to implementing such a rational path could be concern over potential future sanctions. In other words, to embark on this path, Tehran would need to be assured that its international investments won’t become targets of future sanctions by Western governments.

Beyond the political and sanctions-related impediments, to implement such a strategy successfully, Tehran will have to allow investment decisions to be made based on technocratic approaches as opposed to political and ideological ones. Having endured the severe sanctions of the past decade, Tehran will intuitively opt not to invest much in Western economies, which in some cases may lead to undertakings in countries with whom Iran has good political relations, but where the efficiency of the investment would be low.

It remains to be seen what strategy the government and the CBI will adopt with regard to released assets after the lifting of sanctions. Though it is not clear how quickly and efficiently these funds will be released, what is evident at this stage is that their reintegration could potentially harm the country’s economy if it is not paced and structured in a rational way.