Young people in the Gaza Strip have long struggled to coalesce around one central demand in their protests against the dire living conditions since Hamas took over. 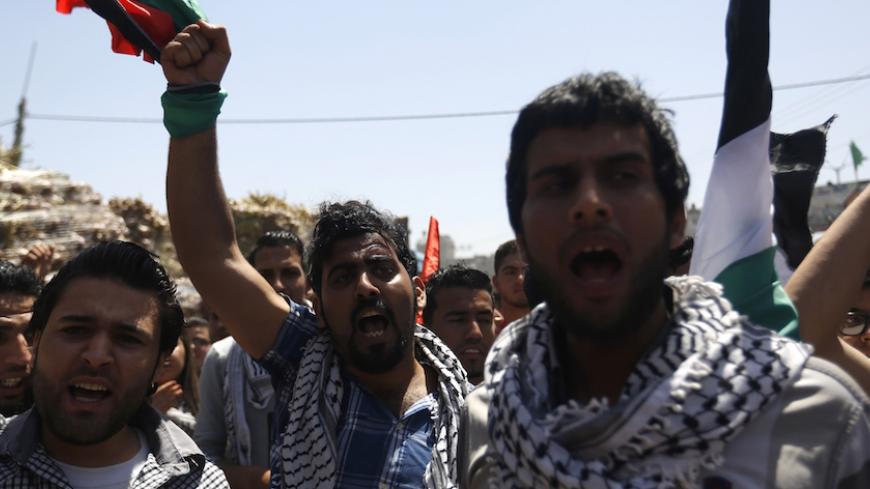 GAZA CITY, Gaza Strip — The number of desperate young people in Gaza is growing every year. They have given up hope for improved conditions in the Gaza Strip, besieged since Hamas won the 2006 elections. Gaza has also been the victim of three destructive wars, a high unemployment rate and the closing of crossings such as Rafah. Faced with this reality, many young people have called for demonstrations against this dire situation, but to no avail.

The most recent demonstration took place on the morning of April 29 in the Shajaiyah neighborhood and also ended in failure. Young people started to gather but before long, only a few remained in the field.

One of the problems was the clear differences among the slogans. While some of the demonstrators waved banners calling for electricity services, improvement of living conditions and an end to division, others called for ending the security coordination between the Palestinian Authority and Israel in the West Bank and for supporting the resistance.

Al-Monitor was present when the crowds dispersed upon the arrival of a group of young men brandishing sticks and wearing civilian clothes attacked the protesters. Some of the protesters who spoke to Al-Monitor said that the attackers were “proxies” for the Gaza security apparatus.

“A group of young people who are affiliated with Hamas took over our area and started shouting different slogans. They then hit protesters with rods. It was obvious they wanted to sabotage our gathering. We will file a complaint with the authorities,” Rami Aman, one of the organizers of the April 29 protest, told Al-Monitor.

“These remarks are not true," a source at the Interior Ministry told Al-Monitor on condition of anonymity. "The security apparatus has nothing to do at all with the attack. The Ministry of Interior agreed orally and implicitly to allow the demonstrations to take place, so why would we want to crack down on them? On the contrary, we were protecting them all along.”

Iyad al-Bazm, the Interior Ministry spokesman, posted on his Facebook page April 29, “The protesters were divided into several groups and they became involved in altercations, which prompted the police to step in to preserve public order.”

An online video showed a similar attack against Al Jazeera cameraman Maher Abu Diqqa and other journalists, including freelance director and cameraman Youssef Natil. Natil told Al-Monitor, “We were covering the demonstrations when suddenly, a group of young men armed with rods appeared and attacked us. They tried to confiscate my camera, but I strongly resisted.”

The protest of March 15, 2011, met the same fate. The gathering was held against the backdrop of the Arab Spring revolutions in Egypt and Tunisia, and young Gazans were swept up in the youth’s enthusiasm in these countries. However, those demonstrations ended with an attack by security men in civilian clothes armed with rods, who beat protesters and kidnapped some in Gaza City’s Battalion Square.

There was also the Tamarod protest, which young people called for on Nov. 11, 2013, to rebel against the Hamas government and the dire living conditions. The demonstration failed to voice any demands after the arrest of its organizers by the Gaza security apparatus.

People aged 15-29 make up 29.9% of the total population in Palestine of about 4.42 million. The unemployment rate among this population stood at 52.5% during the first quarter of 2013, according to the figures of the Palestinian Central Bureau of Statistics and the Sharek Youth Forum.

Political analyst Ibrahim al-Madhoun wrote in the April 29 article “Why did the April Protest Fail?” that young Palestinians are unable to form a clear vision of reality and continue to be self-centered. They are pawns in the hands of security and political groups, he said, here in Gaza and in the West Bank or in the hands of figures working to return to the political scene. Thus, it is easy for the governing powers in the Palestinian arena to contain their moves.

Political writer Mustafa Ibrahim told Al-Monitor that the Palestinian people no longer trust the youth as their political activities have fared so poorly. Many young people have left for Europe while others made personal gains by supporting political parties. Without a cohesive group, the youths' calls for protest did not resonate on the Palestinian street.

Ibrahim added that the multiplicity and ambiguity of the slogans the youth promote has made it easy for Hamas to disrupt the youth movements, ordering its members to take to the streets and mingle with the protesters to sabotage their demonstrations.

Fadi Sheikh Youssef, a young man who participated in the protests of April 29 and March 15, told Al-Monitor that these demonstrations are usually organized by independent and poor young men who cannot even afford placards and banners for the events. Meanwhile, others brandishing fancy banners wait to take over the demonstration square, as happened in 2011.

“We are independent and not affiliated with any party. We do not accept any kind of bribery. We came here today to remind the political leaders of the despair of the young people,” he said, adding that the true reason behind the failure of the youth movement is oppression and violence on the part of security agencies.

The April 29 protests were broken up within minutes. The protesters left the premises, leaving their diverse banners behind them.

One banner read, “Enough Divisions. The time has come to start reconstruction.”

Another asked, “Where do we stand in light of the Gaza employees’ sufferings?”

Both banners had been trampled underfoot, just like the young people’s dreams of change, further crushed with every year and every protest.