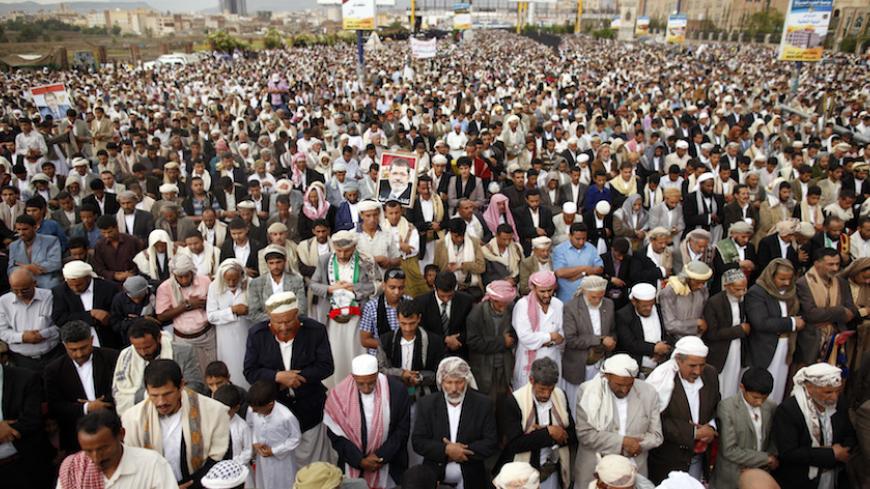 Saudi Arabia launched Operation Decisive Storm against the Houthis in Yemen as Saudi Arabia feared that the Houthis would gain control of the Bab al-Mandeb Strait, threatening shipping in Egypt and the Gulf — while in Egypt, religious currents reacted to the Egyptian air force's controversial participation in the military operation.

The Muslim Brotherhood released a statement condemning the Houthis’ removal of Yemeni President Abed Rabbo Mansour Hadi and called on all parties to use dialogue to end the crisis. Amr Darag and Yahya Hamad, two Brotherhood leaders, clearly expressed their support for Operation Decisive Storm on Twitter. However, they condemned Egypt’s participation under the leadership of President Abdel Fattah al-Sisi, saying that Sisi, like the Houthis, came to power through a coup. Furthermore, a number of Brotherhood supporters in Egypt demonstrated March 27 against the military operation, describing it as “a blow of shame.”

Rassd, a pro-Brotherhood news site, published a March 27 statement from the international Muslim Brotherhood condemning the former Yemeni regime of Ali Abdullah Saleh, who's allied with the Houthis in Hadi's overthrow. The statement condemned what it called “regional support for coups,” which Rassd claimed was a reference to “the Gulf regimes’ support for the July 3 coup in Egypt, and Iran’s support for the Houthi coup."

Amid the Brotherhood’s rejection of the participation of Egyptian forces in Operation Decisive Storm, both the Islah Party (the Brotherhood’s political arm in Yemen) and Yemeni Brotherhood activist Tawakkol Karman expressed their support for the operation. They thanked all of the Arab forces participating in the operations and did not criticize the Gulf or Egyptian forces, which Karman specifically praised on Twitter.

Ahmed Ban, a researcher specializing in political Islam, told Al-Monitor that the Egyptian Brotherhood's position is in line with Yemen's Brotherhood, which rejects the Houthis and their ally Saleh. Yet, Ban said there is likely a state of confusion between the branches of the Brotherhood, given the Egyptian branch's rejection of Cairo's participation and the Yemeni branch's support. In light of Brotherhood supporters taking to the streets to denounce the operation, Brotherhood leaders in Egypt are incapable of connecting with their bases and supporters, who reject any measure taken by the current Egyptian authorities under Sisi.

Taher al-Hashemi, an Egyptian Shiite leader, told Al-Monitor that he rejects the Egyptian army entering any battles outside Egyptian territory, given Egypt's “difficult security and economic situation.” Despite this rejection, he supports the Egyptian air force’s strikes against the Islamic State (IS) in Libya. IS killed 21 Egyptians in Libya in February 2015. Ban considers this to be a contradiction in Hashemi’s positions.

Yet, Hashemi posted a letter praising Sisi on his official website March 29: “The Arab nation needs [Sisi’s] wisdom, experience and wise leadership to safeguard the blood of the Muslims in Yemen.”

Meanwhile, Shiite leader Ahmed Rasim al-Nafis told Al-Monitor that Egypt's Shiites do not have a clear, unified position on the matter. Nafis personally expressed his objection to the operation in a March 31 article on Shafaqna.

Ban told Al-Monitor that Shiites in Egypt have neither directly opposed the military operation nor explicitly criticized the Egyptian authorities. Rather, according to Ban, their reactions will be expressed by their leaders, such as Hashemi and Nafis, whose positions are not to be taken as representing all Egyptian Shiites. Many Shiites in Egypt do not want to appear as opponents of measures to secure Egypt's national security.

Spokesman for the Salafist Call, Ali Hatem, and Nour Party official Mahmoud Hegazy supported Egypt’s participation in Operation Decisive Storm, describing it as a blockade on Iran’s support for Shiite expansion in the Middle East. In a March 26 press statement, Hegazy predicted that the operation would be the beginning of a Sunni alliance to counter Shiite expansion. Ban said this stance is consistent with Salafist doctrine, which considers Shiites apostates.

In a March 27 statement, Gamaa Islamiya clearly announced its support for the operation, even though Gamaa Islamiya is the Brotherhood’s top ally within the so-called National Alliance to Support Legitimacy and Reject the Coup. The latter was founded in June 2013 to oppose the ouster of President Mohammed Morsi. Although the Brotherhood’s position was vague in its condemnation of Egypt’s participation, Ban said that Gamaa Islamiya’s stance was also in line with its religious doctrine, which rejects the Shiite sect. Gamaa Islamiya's response was fundamentally religious and far removed from any political considerations. “This is because [Gamaa Islamiya] is a jihadist entity — it has not been practicing politics for long, unlike the Brotherhood,” he said.

In a March 26 statement, the General Chiefdom of Sufi Orders announced its full support for Egypt’s participation in Operation Decisive Storm. Sufi leader Ala Abu al-Azaim told Al-Monitor that the operation is not a conflict between Sunnis and Shiites, but rather part of an effort to combat terrorism. Ban said that Sufi orders avoid describing the battle as a conflict between Sunnis and Shiites, given the convergence of some Sufi orders and Shiite sects on certain beliefs.

Operation Decisive Storm is the first time that the positions of the Brotherhood, the Salafist Call, the Sufis, Gamaa Islamiya and Al-Azhar have all converged. However, each group supported the operation according to their own calculations.

Most of the reactions were clear, with the exception of the Brotherhood's, whose Yemeni branch supported the operation and Egyptian branch rejected it. Regardless of the Brotherhood's views on Egypt’s participation, they were criticized by their supporters who held demonstrations opposing military action.