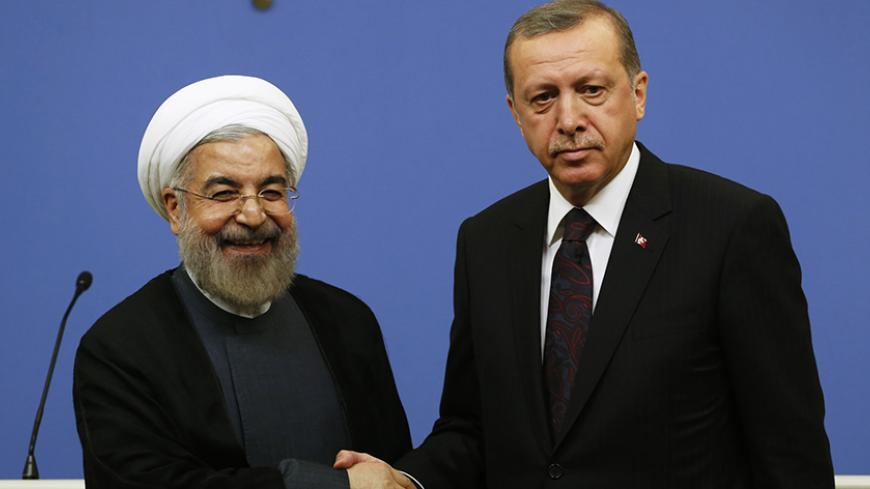 Turkey officially welcomed the framework agreement between six world powers and Iran, although some resentment, not to mention envy, was also discernible in government circles. There was, however, also a sense of admiration for what is seen as a major diplomatic coup for Tehran at a time when Ankara is isolated in the region.

The agreement with Iran also comes shortly after President Recep Tayyip Erdogan openly targeted Iran, telling it to stop interfering in Iraq and Yemen and vying for regional domination. Erdogan said this was “intolerable” and “must not be allowed to happen.”

Ironically, though, Erdogan was in Tehran on April 7 for an official visit, less than two weeks after he lashed out at Iran, and his conciliatory tone while there was noted. This is seen as another sign of weakness by Ankara, which clearly cannot afford to sever ties with Tehran for a host of strategic reasons that transcend Erdogan’s Sunni-based ideological leanings.

Foreign Minister Mevlut Cavusoglu was the first to welcome Iran’s nuclear deal while answering questions for reporters in Vilnius during an official visit. Cavusoglu could not conceal his resentment, however, over the fact that Turkey had been sidelined in the Iran talks.

This resentment harks back to the nuclear deal Turkey, together with Brazil, worked out with Iran in May 2010. That deal was scuttled by Washington where it was seen as too little, too late.

“We are very happy that this agreement has been reached,” Cavusoglu said. He added, however, that it fell short of the deal Turkey and Brazil had secured. “I hope that in June [when the final agreement is expected to be signed] Iran will come to the line established in 2010,” he said.

Talking later in Ankara, at a press conference with his Pakistani counterpart Nawaz Sharif, Prime Minister Ahmet Davutoglu also welcomed the agreement with Iran, but felt the need to attribute a major role to Turkey in this outcome. “The agreement arrived at in 2010 as a result of our intervention as Turkey is still seen as one of the most important stages in this regard,” he argued.

The daily Yeni Safak, which openly acts as a mouthpiece for Erdogan and the ruling Justice and Development Party (AKP), also maintained this line in its reporting. It said the agreement with Iran was the same accord Turkey worked out in 2010. “The West took five years in Lausanne, Switzerland, to arrive at the same point with Turkey, which was the architect of this process,” it argued.

Not everyone in Turkey was resentful, though. Critics of the government’s foreign policy pointed out that Iran had made major gains with this deal and would amplify its regional influence.

Retired Ambassador Suha Umar, whose postings included Jordan and who is currently the deputy director of the Turkish Asian Center for Strategic Studies, referred to the major headway Iran has made with the West, which until recently considered it a “rogue state.”

“Iran has become a partner with the most important members of the Security Council by sitting with them and arriving at an agreement. It showed in this way that the best way of protecting one’s interest is diplomacy,” Umar told Al-Monitor.

He said Iran had also gained the upper hand in its regional rivalry with Turkey. Umar said Tehran has also put itself in the position of being a potential partner with Western countries that are disturbed by the rise of radical Sunni forces in the Middle East.

Abdulhamid Bilici, the general director of Cihan News Agency and a columnist for Zaman, for his part pointed to the ironic situation Turkey finds itself in today vis-a-vis Iran. He said in his column that Iranian President Hassan Rouhani resembles the Erdogan of the period up to 2011.

“It is as if Iran is emulating Turkey’s policies when it was a shining star on the world stage. … Just as Tehran is trying to embrace the world, it seems Turkey, with its repressive domestic policies and quarrelsome manners with the world, is taking Iran under [former Iranian President] Mahmoud Ahmadinejad as its model,” Bilici wrote.

He also pointed out that an Iran with normal ties with the world will be much more of a regional rival for Turkey. This is what concerns the AKP’s ideologues and its Sunni support base. Erdogan’s recent outbursts against Iran also reflect this concern.

Ibrahim Karagul, the editor-in-chief of Yeni Safak, for example, argues that Iran is “the new imperial power” trying to dominate the Middle East. “Iran has to be pulled back to an ethical line as soon as possible and stop its threatening, covetous and reckless aggression toward its neighbors,” Karagul said in a recent commentary.

Claiming that Iran is trying to encircle Turkey from the south and to drive a wedge between it and the Arab world, Karagul maintained that this could result in a regional war that would also involve Turkey.

There are those in the AKP, however, who appear pleased by Iran’s nuclear deal. Finance Minister Mehmet Simsek was quick to point out that this will result in the lifting of sanctions against Tehran and increase exports to an Iran in dire need of commodities that are produced in Turkey.

Simsek added that Iran’s re-entry into the world market would also reduce the price of oil, which will also benefit Turkey, not to mention the fact that Turkey can also act as an important conduit for Iranian gas and oil.

With Erdogan’s recent angry remarks aimed at Iran, and the negative commentary about the country in the pro-government media in Turkey, many wondered what the outcome of Erdogan’s visit to Tehran — during which he was due to hold talks with Rouhani and be received by the Supreme Leader Ayatollah Ali Khamenei — would be.

The fact that 65 Iranian parliamentarians demanded before the visit that Rouhani warn Erdogan about his "imprudent" statements on Iran and ask for an apology had also heightened expectations. That clearly did not happen, though.

Erdogan was met cordially by Rouhani and given the full trappings of a state visit. Their joint news conference also proved to be an anticlimax in this regard. Erdogan’s only controversial remark, if indeed it was that at all, concerned the high cost of natural gas supplied to Turkey by Iran.

When he pointed out, however, that they had also discussed regional developments, Erdogan’s tone was conciliatory. He said the two sides had explored what could be done jointly to overcome regional tensions and combat terrorism. He also thanked Rouhani for his warm hospitality.

This tone of Erdogan’s contrasted sharply with his previous Iran bashing and confused observers and diplomats alike, forcing them to see this as a further sign of confusion in Turkey’s current foreign policy.

“Such vacillation clearly signals a lack of a coherent policy. Erdogan’s angry remarks against Iran suggest that he is merely reacting impulsively at the spur of the moment without any forethought,” Umar said.

A senior Western diplomat in Ankara, talking on background due to his sensitive position, also said that Erdogan’s contradictions point to an “unbalanced foreign policy.” He added that Ankara had to be more coherent. “We are still glad that this visit took place, though. Turkey and Iran have a lot to talk about. It is always better to talk than to shout,” the diplomat said.

He also indicated that Turkey could still play a positive and nonsectarian role by maintaining a balance between Iran and Saudi Arabia and contributing in this way to regional peace. He added, however, that he was not sure Ankara, under the present administration, is prepared to do this.