Despite a red-carpet welcome to Tehran, where meetings between the Turkish president and Iranian officials focused on economic ties, the uproar around Recep Tayyip Erdogan's incendiary remarks about Iran continued unabated. 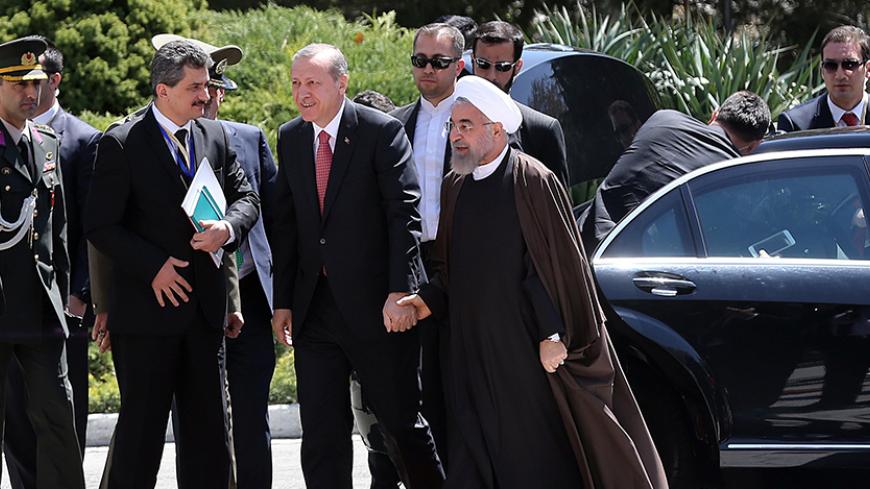 Turkey’s President Recep Tayyip Erdogan’s visit to Tehran in the wake of the nuclear framework agreement with Iran would have been consequential even if Erdogan had not made his highly controversial remarks on Iran only about two weeks ago. Given the uproar he caused in Iran, his simply making the trip should be considered a success.

Despite the routine red-carpet welcome, he was not very eagerly received in Iran. From Foreign Minister Mohammed Javad Zarif to the spokesman of the Iranian parliament’s National Security and Foreign Policy Committee, Hossein Naqvi Hosseini, and the deputy chairman of the committee, Mansour Haqiqatpour, a number of Iranian officials reacted bitterly to Erdogan's statement in an interview with France 24.

Erdogan told France 24 that Ankara may consider providing “logistical support” to the Saudi-led military mission in Yemen. He said, “We support Saudi Arabia’s intervention.” But what really caused Iranian furor was what he said about the situation in Yemen: “Iran and the terrorist groups must withdraw.” Adding salt to the wound, he said of Iran’s ambitions in Iraq and the fight by the US-led coalition against the Islamic State (IS), “Iran is trying to chase [IS] from the region only to take its place.”

That may be the most imprudent statement ever heard from a Turkish official on Iran. Both countries, despite an acute yet an undeclared rivalry, had always boasted of having a stable relationship since the Qasr-i Shirin Treaty signed in 1639. Irrespective of whoever holds office in Ankara and Tehran, they have generally refrained from making statements that could be seen as offensive to the other side.

After Erdogan broke the centuries-old tacit rule, the first response came from Zarif. He criticized Turkey of making “strategic mistakes” and asserted that every country in the region should work for the stability of the neighborhood. Turkey’s charge d’affaires in Tehran was summoned to the Foreign Ministry to provide a explanation from Ankara.

Haqiqatpour, openly called for the cancelation of Erdogan’s visit to Tehran scheduled for April 7. Hosseini said that to receive someone who humiliated his country with a red-carpet welcome would be shameful. Speaking to Iran's Fars News Agency, he insisted that Erdogan’s visit be canceled or at least postponed.

Apart from those statements, 65 parliament members insisted that Erdogan should apologize before coming to Tehran and called on President Hassan Rouhani to postpone his Turkish counterpart’s visit.

Erdogan did not retreat but also refrained, uncharacteristically, from escalating polemics with Iran. He adopted a low profile stance on the eve of his Tehran visit. Nevertheless, he was received at the airport by Iran's communications minister, interpreted by Iranians as a display of the minimum protocol, and soldiers carrying banners decorated with Shiite symbols, apparently to embarrass Erdogan, who is increasingly seen in Tehran as taking an adamant sectarian stand vis-a-vis Iran. But Erdogan did manage an audience with the supreme leader, accompanied by Rouhani.

At a crucial election period in Turkey, Erdogan could well present the red carpet under his feet as evidence that there is no diplomatic and political price for his views, which are staunchly defended by his followers as ethically if not politically correct.

No matter how he marketed his visit to Tehran, the Iranian public was not impressed by Erdogan's persistence in coming. The Reformist Iranian daily Shahravend published a cartoon under the title, “The Ottoman Don Quixote goes to Tehran.” Erdogan had a reputation of suing all cartoonists in Turkey critical of him. He could not do so to Iranian cartoonists.

According to BBC Persian, the reference to Don Quixote meant that Erdogan’s defiance of Iranian influence in the Middle East and his dreams of reviving the Ottoman Empire are like fighting Quixote's windmills.

Erdogan can be incredibly pragmatic. After walking hand in hand with Rouhani over the red carpet to enter the Saadabad Palace in Tehran, he did not bring up any controversial issues in his talks. During the joint press conference, he addressed Rouhani as “my brother” and emphasized that Turkey and Iran should join their efforts to bring a peaceful outcome to the Yemeni crisis.

Implying he has no sectarian stance on the issues tearing the region apart, speaking on Iraq and Syria, he said that he does not care whether Shiites or Sunnis are the casualties. For him, what is important is that Muslims are the casualties. He proposed joint mediation efforts by Iran and Turkey in the region and repeated the same discourse when he was received by Supreme Leader Ayatollah Ali Khamenei.

He emphasized trade and economic ties rather than political differences. If a deal on Iranian nuclear power means the lifting of sanctions against Tehran, Erdogan was quick to assess that Turkey could win big as the neighboring trade partner of a potentially booming economy. In Tehran, he complained that the target of $30 billion in trade volume between the two countries remained at $14 billion and $10 billion of that amount is from Iran to Turkey because of the sanctions. He added that Turkey’s most expensive gas imports come from Iran. He signaled that if the gas prices were lowered, Turkey would be willing to import much more from Iran than the current volume. He also proposed eliminating the US dollar and the euro as the currency of commercial transactions between the two countries and using national currencies instead.

His visit saw the signing of eight economic cooperation agreements, none of paramount importance, but one that could nonetheless be played up as an achievement, bearing in mind that the visit could have been canceled altogether, setting powerful neighbors on a dangerous collision course in a region already witnessing an acute sectarian conflict.

Some Turkish media outlets made fun of Erdogan’s Tehran visit, comparing his conciliatory remarks in Tehran with his extreme harshness to Iran only two weeks ago. “Erdogan, who was very strongly critical of Iran in Ankara, was docile in Tehran,” read Diken's wrap-up of his visit.

The nuclear framework deal reached might be a game changer in Turkey’s — meaning Erdogan’s — attitude toward Iran. It sent signals to Turks that Iran will escape its international isolation, with regained weight in regional and international affairs. Turkey, which already has problems with its Western allies on Middle East issues, particularly Syria, cannot afford to be at loggerheads with Iran.

Turkey, while not overly concerned about the security aspects of the nuclear deal in favor of the potential benefits it may offer Turkey, nevertheless expressed its disappointment at being sidelined in negotiations with Iran. Turkey’s Foreign Minister Mevlut Cavusoglu said the accord fell short of the deal Turkey and Brazil had secured. “I hope that in June Iran will come to the line established in 2010,” he said. Prime Minister Ahmet Davutoglu did not miss the opportunity to snipe at the UN Security Council's rejection of Turkey, whose 2010 intervention was crucial in reaching an agreement today.

It must be noted that Turkey was not concerned about Iran’s nuclear capacity like the Gulf actors, above all Saudi Arabia. Its status as a NATO member provided a certain security assurance that neither Israel nor some Arab countries have concerning Iran. They are also Sunnis, but Turkey’s geopolitics are different than those of the Gulf. Turkey has a history and geography that equips it with a certain self-confidence that others in the region lack when it comes to dealing with Iran.