Abductions in Syria cause widespread fear

The Islamic State and the Kurdish People's Protection Units have been carrying out kidnappings in Syria, both seemingly working toward the same goal: terrorizing those who do not support them. 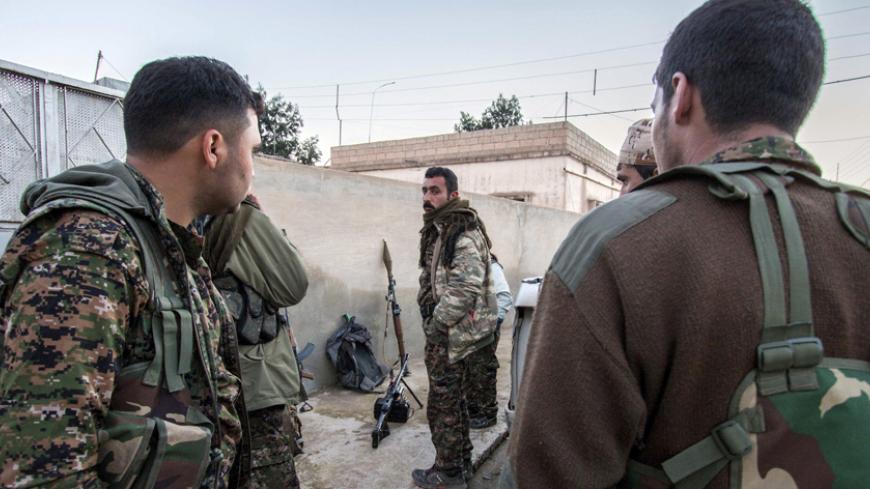 Syrians continue to go missing at the hands of the armed groups that have taken control over some parts of Syrian territory. The objective of the Islamic State (IS) is to intimidate the Syrian community, with abduction as its main tool of terror.

Shaha Mohammed lost her son, Aker, 17, during the attack on the city of Kobani. Aker had joined the Kurdish People's Protection Units (YPG) to defend Kobani. She told Al-Monitor, “It’s been a while since we have heard something about him. We have not been able to communicate with him, although all his friends have communicated with their families. We just want to know what has happened to him. Had he lost his life, we would have known. We have not heard from him and we have been experiencing significant emotional suffering. We will do anything to get any news about him. He is my eldest son.”

IS has not limited itself to the abduction of civilians; it has also tried to oppress freedom of speech and prevent journalists from reporting. It has abducted journalists in the field and threatened to behead or burn them, as is the case with Kurdish journalists Farhad Hamo and Massoud Aqeel, who were abducted in December 2014.

Kurdish journalist Faruq Haji Mustafa told Al-Monitor, "IS has adopted a policy of terror by beheading hostages. The reason behind the abduction and beheading of journalists is perhaps to scare and displace them from their areas, so that the only available news coverage would be broadcast and published directly by IS. Countries have begun to advise their citizens to avoid IS-controlled areas, particularly since the beheading of US journalist James Foley and others.”

Jiwan Abdulrahman Khaled is one of the most prominent Kurdish activists of the Syrian revolution. He was abducted by a group affiliated with the Syrian regime in September 2012. No one has heard from him since then. His wife, Vyane Khaled, told Al-Monitor, “Jiwan was a relief worker. He has been arrested more than twice. Yet that time around, some group called the People’s Committee raided the residence of one of his friends, where they were preparing for work. Sources told us that this group abducted them on Sept. 4, 2012, and handed him over to the security services."

Amnesty International has demanded that the Syrian regime reveal information on Khaled, who according to them is a Syrian activist defending democracy and freedom.

Activists of the Kurdish revolutionary movement have lost the support of Kurdish citizens in Syria and have fallen victim to abductions in Syria. Amid the revolution in Syria, Kurdish activists have been abducted by Kurdish armed groups and the YPG, which is the military wing of the Democratic Union Party.

Shapal Ibrahim, leader of the National Organization for Kurdish Youth (SOZ) and former political detainee, told Al-Monitor, “The abductions have come in succession in the Kurdish region, and the suffering of Kurdish activists during the Syrian revolution is no longer a secret. They were abducted only because of their support for the Syrian revolution. Thus, they were subjected to arrest, abduction, harassment and death threats, because no party has supported or protected the youth, nor demanded [their release].”

Kurdish activists are at great risk of being abducted, as was evident, for instance, with the disappearance of Amir Hamed, a prominent activist and SOZ member.

Kurdish groups have been condemning the kidnappings carried out by IS, but have also been kidnapping Kurdish activists themselves, to sow terror in the ranks of those who do not support them in areas in Syria where they have gained control.

Ibrahim told Al-Monitor that these practices are terrorizing citizens. “The reason why these parties have not claimed responsibility for the abductions is part of the policy of terror they implement in various ways. … Since Hamed was abducted, we have been blaming the Asayish [Kurdish for “security”] for his abduction, since they are the sole authority in the city where he was kidnapped. We have secured all documents and gathered signs proving that they [Asayish] are behind his abduction, especially the information we have obtained from those who were accompanying him. All of that is posted on our official Web page, and Human Rights Watch, which questioned the Asayish practices, has also demanded [information],” he said.

As for activist Azad Atta, another SOZ member, the Asayish eventually admitted that they have abducted him. But he has not been tried and the charges against him are still unknown. We [SOZ] still don't know for how long Azad Daoud will remain in prison,” Ibrahim said.

When will the abductions, haunting Syrian youths and minors in particular, by military organizations cease, and when will calm return to Syria?