In the Kurdish-controlled areas of Syria, special courts prosecute the Islamic State fighters captured during the battles between the organization and the People's Protection Units. 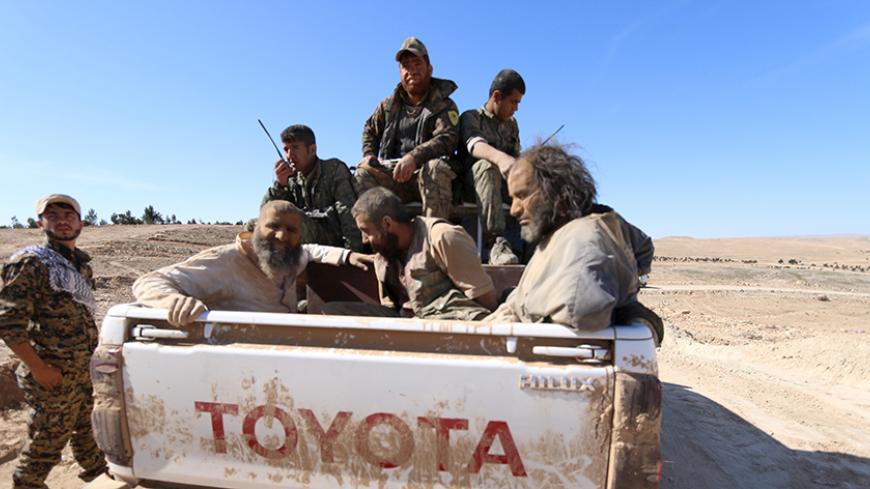 Three prisoners taken by the Democratic Forces of Syria and claimed to be fighters of the Islamic State sit under guard on a pickup truck near al-Shadadi town, Hasakah countryside, Syria, Feb. 18, 2016. - REUTERS/Rodi Said

QAMISHLI, Syria — A picture shared by Kurdish activists and journalists from Syria has opened widespread discussion of the fate of Syrian prisoners of war. The picture, which first appeared March 9, shows a female fighter from the Kurdish People’s Protection Units (YPG) tending to the wounds of a member of the Islamic State captured by the Kurds following battles in the countryside of al-Shadadi town in the province of Hasakah, northeastern Syria.

Since June 2014, military clashes between the YPG and IS have expanded and many IS fighters and members have been captured by the Kurds. Despite the need to deal with the issue, some Kurdish officials have shown great reluctance to state how many have been caught.

The Asayish, a local Kurdish police force, is part of the self-rule declared in early 2014 in the three Kurdish-majority areas of Hasakah, Kobani and Afrin.

An official source from the Asayish told Al-Monitor on condition of anonymity, “When IS fighters are caught red-handed and arrested, they are immediately referred to the nearest Asayish center, where they are interrogated and their initial confession is taken.” The injured are taken to a military medical facility affiliated with the Asayish to be treated until their health has improved.

“After the interrogation, the arrestees are taken to a special prison for terrorism cases,” the source added without specifying the prison’s name or its location. He noted that those accused of terrorism are “people who took up arms against the Kurdish forces or people who equipped themselves to carry out suicide attacks or served as spies for IS and provided information regarding [Kurdish] military sites.”

Meanwhile, lawyer Sanharib Barsoum, the head of the human rights committee affiliated with the Kurdish self-rule, told Al-Monitor, “When the self-management was declared, [the Kurds] already had many IS prisoners who were involved in terrorist acts and prisoners who were suspected of belonging to this extremist group. At the time, there were no special courts to prosecute those prisoners.”

According to Barsoum, Kurdish officials gave instructions to establish the special courts needed to prosecute them. Prosecutions in one of them, the “Anti-Terrorism Court,” began in January 2015.

This court is headed by a former judge in Syrian civil court. He told Al-Monitor on condition of anonymity, “I have been called ‘the judge’ for the past 10 years, given my experience in law and courts.” He explained that the courts' practices were “inspired by international laws on terrorism,” noting, “We, the judges and lawyers presiding over the court, have studied the laws and legislation of developed countries that had previously formed anti-terrorism courts.”

The judge said that the Anti-Terrorism Court’s judgments “range between six-month imprisonment and life sentences, and are not subject to appeal.” He noted that the death penalty has been abolished as a legal punishment, stressing, “The court has issued a resolution preventing the use of violence during interrogations as well as physical and psychological abuse in prison. We have even given instructions that solitary confinement should not exceed one week.”

The judge added, “Those arrested attend the court’s hearings and deliberations and their first-degree relatives are allowed to visit them in prison before their sentence is determined. The arrestees are brought to court to hear the judgment. The text is then sent to the administration of the prison where they would serve their sentence.”

He said that in one of the cases referred to the court, the accused was caught red-handed trying to plant an explosive device in a market in Girke Lege city, 70 kilometers (43 miles) from Qamishli in northern Syria.

“The young man was sentenced to five years in prison, but the court considered mitigating circumstances, as he was only 20 years old and had admitted that he was promised money [in return for planting the device],” the judge explained. Prominent figures from the area responded to his mother’s calls to mediate for his release, as he was the family’s sole breadwinner after his father's death. According to the judge, “At the time, the court decided to release him under the condition that he remain at the same residence, and after mediators ensured he would no longer be in contact with the organization.”

Regarding the nationalities of those arrested and accused of terrorism, the judge said, “The majority are Syrians from the area, whom we recognized from their accents, and there are also foreigners from Arab and Western countries.”

The human rights committee appoints lawyers, at its own expense, to defend those arrested and referred to the Anti-Terrorism Court. Barsoum said, “We periodically visit the prison in which the defendants are serving their sentences. We check on them, talk to them and listen to their complaints. Most complaints revolve around provision of services and means of communication.”

There have been reports of prisoner-exchange deals between the YPG and IS with the help of local mediators, though both parties deny such deals.

On July 23, 2015, the YPG and IS made a prisoner-exchange deal with the help of independent Arab and Kurdish mediators from Hasakah in the town of al-Hawl, in which six fighters in total were released.

Another deal was reached Sept. 21 in the town of Tal Hamis, located in the far northeast of Syria. With the help of mediators from the area and prominent Arab figures, the YPG released eight IS prisoners, including foreign fighters. On the other side, IS released six Kurdish prisoners, including journalist Massoud Aqeel, who was working as a cameraman for the Kurdish Rudaw news site before he was kidnapped by IS members along with his colleague Farhad Hamou on Dec. 15, 2014.

Six years into the Syrian crisis, military leaders continue to be reluctant to disclose the number of prisoners and abductees. Kurdish officials in Syria do not rule out the possibility of reaching a comprehensive settlement at the national level to release all prisoners. Al-Monitor was unable to reach leaders or members of IS for their opinion on the matter.