Russia's desire to play an active role in the Middle East extends beyond Cairo and Damascus to longstanding issues further south. 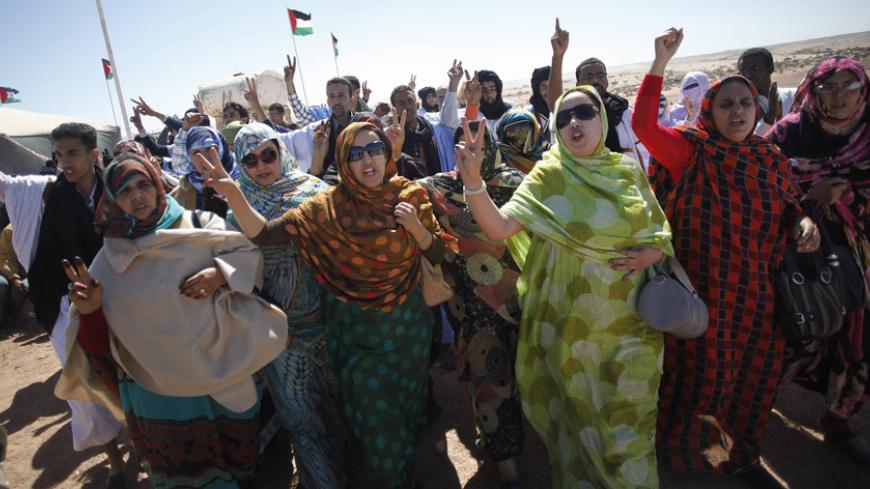 Sahrawis shout slogans for the freedom of Western Sahara before a demonstration in the Sahara Desert in southwestern Algeria, Feb. 28, 2011. - REUTERS/Juan Medina

One would expect that the dramatic events taking place in Palestine, Syria, Iraq, Libya and now in Yemen would monopolize the attention of Russian politicians and diplomats involved in the Arab East. However, this has not been the case. Among the old yet unsolved and "dormant" conflicts in the region is that of Western Sahara. But as recent events demonstrate, long-standing conflicts can flare up unexpectedly, causing outbreaks of violence, in particular where the interests of influential external actors — often guided by economic considerations — clash.

The international media, fully absorbed with "hot" conflicts, overlooked the recent first visit to Moscow of a delegation of the Polisario Front (Western Sahara). The delegation was headed by a member of Polisario’s Secretariat and by M’hamed Khaddad, Polisario’s coordinator with the United Nations Mission for the Referendum in Western Sahara (MINURSO). Although the visit was not official — the delegation arrived in Moscow at the invitation of the Institute of Oriental Studies of the Russian Academy of Sciences — it was received by Deputy Foreign Minister Mikhail Bogdanov as well as by members of the Council of the Federation, the upper chamber of the Federal Assembly. It also held a meeting with a group of Russian experts on the region.

The visit is yet another sign that Russia seeks to play a more active and independent role in the region. It also stands as further evidence — as manifested in recent years — of the ability of Russian diplomacy to take atypical steps to lay the groundwork for solutions that fit Russia’s interests to the greatest extent possible, and to expand contacts with political forces of different orientations. Contrary to its former, more cautious style of diplomacy, Moscow has taken to acting more often without regard for others, and doesn’t shy away from opposing the actions of any one regional player, if it sees fit. In a way, this diplomatic style has something in common with that of the United States. In the region, special attention is paid to the crucial role played by Bogdanov — a brilliant diplomat and expert on the Arab world — in leading Russian foreign policy there. Even those who disagree with Russia’s foreign policy hold him in high esteem.

In Moscow, it must have been clear that the mere fact of a Western Sahara delegation having such a high level meeting with Russian officials would warrant a negative reaction on the part of Morocco. But it would be a mistake to conclude that Polisario’s visit came in response to the cancelation of the king of Morocco’s official trip to Russia while his other visits went ahead as scheduled. Instead, the Polisario meeting fits the ordinary diplomatic practice to thoroughly prepare an issue before it is discussed at the UN Security Council. This should occur in the near future, as the April 2014 UN Security Council Resolution 2152 extended the mandate of MINURSO until April 30, 2015.

When defining its foreign policy line on Western Sahara, Moscow must, however, take into account the need not to harm relations with all other North African countries, which hold opposing views on the Sahrawi issue. Algeria, for one, which supports Polisario and recognizes the Sahrawi Arab Democratic Republic, is one of Moscow’s key partners in the region. Relations between Russia and Morocco have a long history. As far back as 1777, Sultan Mohammad Bin Abdullah III approached Catherine the Great with a proposal to establish trade relations, while the Russian General Consulate was opened in Tangier in 1897.

Moscow also needs to heed the position of such an important Arab partner today as Egypt. The counterterrorism cooperation between Algeria and Egypt over the Libyan crisis has not only fostered distrust on the part of Morocco, but also led to a brief information war between the latter and Egypt. During this war, Moroccan TV called the Egyptian regime a "usurper," while the Egyptian media criticized the Moroccan ruler for collaborating with the previous Islamist government.

Although the Russian dilemma in Western Sahara is not as acute as those in Syria or Yemen, it is still real. Moreover, one wonders whether the debate about the Western Sahara issue will become yet another area of cooperation between Russia and the West, as in the case of Syria’s chemical weapons or Iran’s nuclear program, or if it will be a new field of confrontation between Moscow and Western capitals.

For now, Moscow asserts that its position on this issue has remained unchanged. In an official statement Feb. 25, the Russian Ministry of Foreign Affairs declared, after a meeting between Bogdanov and Khaddad, this position is based "on the need to find a mutually acceptable political solution to this long-standing problem on the basis of the relevant UN Security Council resolutions."

During his stay in Russia, at a Feb. 27 press conference at the international news agency Russia Today, Khaddad declared, "Russia can do much for the stability of the North African region. We hope and expect the help of the Russian Federation in maintaining regional peace and stability." The Western Saharan politician also stressed, "Some countries, such as France, while speaking of their commitment to human rights, on the other hand … hindered the search for a solution."

In Russian juridical circles it has been suggested that while Western Sahara has not been recognized as a state by the international community at large, a number of UN Security Council resolutions contain ad hoc recognition of Western Sahara and Polisario (that is, recognition for a specific purpose). For example, that UNSC resolutions refer to Polisario as one side to the conflict (particularly in UNSCR 1042 of Jan. 31, 1996), speak of the council’s willingness to take into consideration the official proposals submitted by Polisario (as in UNSCR 1359 of June 29, 2001) or appeal to the parties to the conflict encouraging them to ensure respect for human rights in accordance with their relevant international obligations, which implies that Polisario has international obligations (as in UNSCR 2044 of April 24, 2012).

Russian experts do not rule out that the situation in Western Sahara may worsen, given the belligerent statements by Sahrawi Minister of Foreign Affairs Mohammad Ould Salek. Speaking after Morocco’s King Mohammed V’s declaration that Western Sahara will remain Moroccan "until the end of time," Ould Salek stated, "The Sahrawi people will have no other choice but to return to armed struggle." This past December, Russia watched with alarm as Polisario made military maneuvers near the Moroccan border. Moscow is interested in a peaceful, diplomatic solution, and not in the emergence of a new armed confrontation that could jeopardize its good and balanced relations with both Morocco and Algeria.

Economic considerations will play a huge role in the future development of the situation. As Russian expert Nicolai Sukhov observed in an unpublished article made available to Al-Monitor, Morocco has already invested enormous resources in the part of Western Sahara it controls, and Western Sahara’s mineral reserves are of crucial importance for the Moroccan economy. It is worth mentioning that Western Sahara already produces about 2.4 million tons of phosphates annually.