How Polisario Front hopes to partner with Russia in Western Sahara

Polisario Front officials in Western Sahara are working to enlist Russia as an ally at the United Nations Security Council in their fight for independence, as they believe both sides have many shared interests. 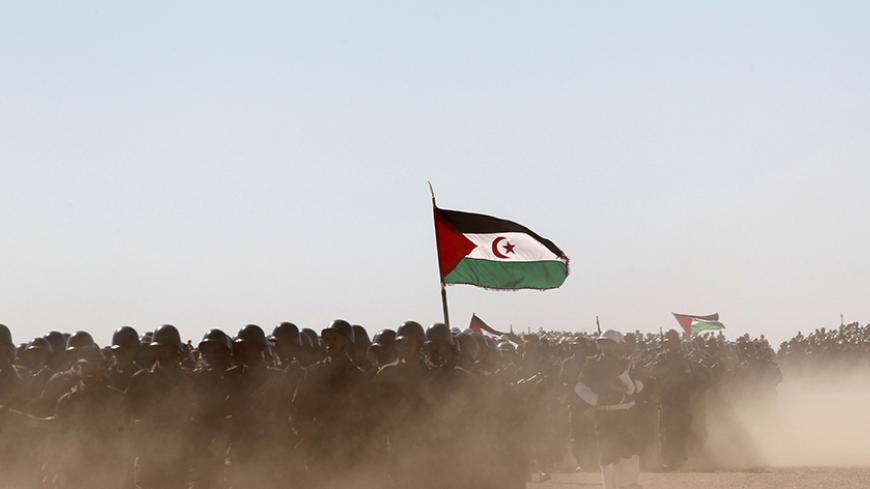 Polisario Front soldiers take part in a parade for the 35th anniversary celebrations of their independence movement for Western Sahara from Morocco, in Tifariti, southwestern Algeria, Feb. 27, 2011. - REUTERS/Juan Medina

Russian and Polisario Front interests are intersecting at the Atlantic Ocean, providing the potential for an unexpected relationship that could change the status of the Western Sahara conflict.

On March 23, Moscow welcomed a delegation from the Polisario Front, the independence movement of the Sahrawi people of Western Sahara — territory to which Morocco also lays claim. M'hamed Khadad, the Polisario's coordinator with the UN Mission for the Referendum in Western Sahara, led the delegation and met with Russian Deputy Foreign Minister Mikhail Bogdanov. The latter received the Moroccan king last year.

The Sahara Press Service reported that Khadad called for strict adherence to international law so the Sahrawis can determine their own future. The UN has tried since 1991 to broker an agreement whereby Morocco would honor a referendum in which the Sahrawis could decide whether they want independence or integration with Morocco. For decades, Morocco has refused to consider any deal that includes the option of independence.

Russia's Ministry of Foreign Affairs said in a news release about the meeting that Bogdanov "reiterated Russia’s unchanging position on the need for a mutually acceptable political solution to this long-running problem, based on relevant UN resolutions." The ministry also said it wants to continue working with "all interested parties, in particular, with its partners in the Group of Friends of Western Sahara." The Group of Friends is composed of France, Russia, Spain, the United Kingdom and the United States.

This visit was preceded by a meeting between Polisario leader Brahim Ghali and UN Secretary-General Antonio Guterres on March 13, about a month before the annual report of the UN Security Council on Western Sahara was expected.

The Polisario Front visit to Moscow caused concern in Morocco, until the Russian Embassy in Rabat released a statement to explain its position on the Western Sahara conflict, but with a softer tone this time.

“Russia stressed the need to intensify the efforts of the international community to achieve a long-term equitable settlement for Western Sahara, taking into account the fundamental interests of the peoples and contributing to the improvement of the situation in the Maghreb,” Morocco World News reported.

Russian involvement in the Western Sahara conflict has been more evident since Morocco and Nigeria struck a pipeline deal, which was announced in December. One goal of that project is to provide Europe with an alternative to Russian gas, which Europe currently depends on heavily.

The pipeline is expected to pass through almost a dozen countries along Africa's Atlantic coast, including Mauritania, which recognizes the Sahrawi Arab Democratic Republic as a legitimate government. The Western Sahara village of Guerguerat lies in a neutral zone near the Mauritania border and has recently been a hot spot between Morocco and the Polisario Front. After a monthslong standoff there, Morocco withdrew its troops in February, but the Polisario has refused to retreat.

The Polisario has counted on the idea of a gas pipeline that must go through Western Sahara to reach Morocco, seeing such a project as leverage, especially with Russia — a permanent, veto-holding member of the Security Council. The Polisario has suffered a number of setbacks in the Security Council, whose other veto-holding members are China, the United States, the United Kingdom and France, a main ally of Morocco. France often takes the lead on matters that concern North Africa. The Polisario sees that Russian influence could shift the Security Council to the Polisario side in the dispute and hopes its presence along the Atlantic Ocean will make Russia see the group as an essential partner to safeguard Russian interests in the region.

The Polisario's insistence on remaining in the neutral zone despite — or perhaps because of — the international attention it has caused prompted Alifpost news site to raise concerns over Algerian advanced S-300 military missiles that are to be installed in the Polisario-controlled area of Western Sahara. Algeria supports the Polisario's cause, and refugee camps in Algeria host many of the refugees that fled their Western Sahara homes to escape the battles.

Another important consideration for the Polisario is Russian-Algerian military cooperation. Russia began supporting the Algerian military in the 1960s and is still its primary military hardware supplier. ​According to the African Defense website, Russian military exports to Algeria amounted to $457 million in 2015. The site added that Russia has delivered $8 billion worth of military supplies to Algeria since 1991.

While Morocco and Algeria race for power in the Maghreb, the Polisario Front seeks Russian support as their interests intersect on several issues, from the pipeline to Algeria´s partnership. The front can offer its help to ensure Russia's interests when it comes to Europe, especially as Europe has been desperately seeking an alternative to Russian gas.