In a recent address to his supporters Hezbollah Secretary-General Hassan Nasrallah voiced his disapproval of Saudi Arabia's regional policies, blaming the kingdom for inciting destruction across the region. 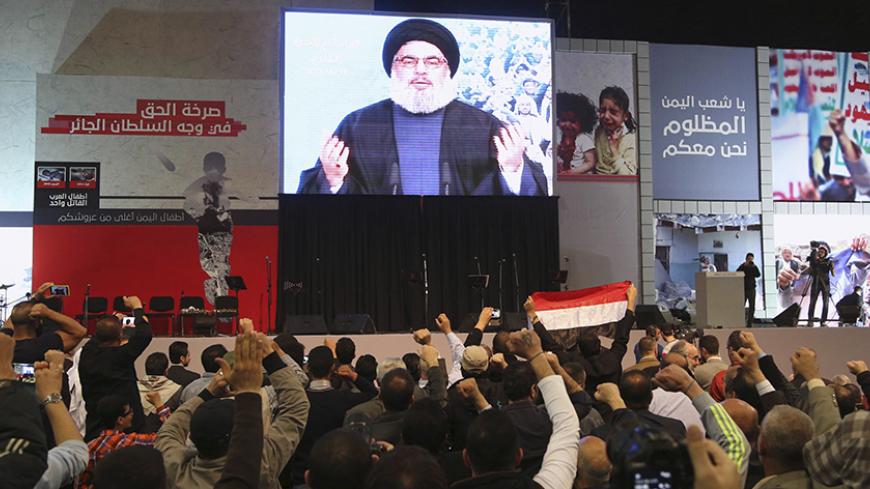 Hezbollah leader Hassan Nasrallah greets his Lebanese and Yemeni supporters through a giant screen during a speech against US-Saudi aggression in Yemen, in Beirut's southern suburbs, April 17, 2015. - REUTERS/Aziz Taher

There are serious fears in Lebanon that the tension surrounding Yemen might shake the already vulnerable security of the country that has been without a president since May 2014.

Hariri tweeted shortly after Nasrallah’s speech, accusing him of “falsification and deception” regarding the Yemeni conflict, noting that Hezbollah’s Yemen rhetoric is “imported from Iran” and does not serve Lebanon's interest.

“Following in the footsteps of Sayyed Ali Khamenei, Sayyed Hassan Nasrallah has excelled in falsification, deception and the shows of intimidation and sectarian mobilization,” said Hariri via Twitter, adding “Insulting the late King Abdul Aziz will put the insulters in the line of fire, from their biggest authority in Tehran to the smallest one in Dahieh."

In his speech, Nasrallah refused to label the war in Yemen as a Shiite-Sunni war, or to accuse Yemenis supporting Houthis of being non-Arabs. "Yemenis do not need to prove their Arab or Islamic identity. It’s those invading Yemen who must prove being real Arabs ... look to their dialect, language, eloquence, nobility, courage, generosity and presence, if the Yemeni people were not from the Arabs, who are the Arabs?" He added, “They claim to be defending the Yemeni state, is it by bombing the state's administrations, airports, ports and military bases. Is this how you defend the state?"

The Hezbollah secretary-general stated, “Nothing will stop us, neither repercussions nor threats, from declaring our condemnation to the US-Saudi aggression on Yemen and our support and solidarity with the people of Yemen."

Nasrallah criticized the Saudi mobilization around the Arab and Muslim world with claims that Ansar Allah (the Houthis) are threatening Islamic holy sites in Saudi Arabia. He accused the Islamic State (IS) of being the real threat: “I can confirm that there is a threat against the two Holy Mosques, but it is coming from Daesh [Islamic State], which after declaring a caliphate in Mosul announced that it will demolish the Holy Kaaba."

Nasrallah elaborated, giving some historical remarks: "After the founding king seized control of Hijaz, his Wahhabi followers — inspired by their culture — demolished all historic artifacts that have to do with the Prophet [Muhammad] in April 1926.” He asked, "Where did the ideology of the groups that are destroying societies and countries come from? Which school of thought and books? Whose culture and fatwas? Who is spreading this ideology across the world? Who is building schools all over the world to teach Muslim youth this destructive, takfiri ideology? Very clearly it is Saudi Arabia. It is using the pilgrimage revenues in the process."

Nasrallah hailed the Yemeni people and said, “The revolutionary leadership of Ansar Allah, this great leader Badr al-Din al-Houthi, now has the chance to attack and infiltrate into Saudi Arabia. However, he doesn't because he is performing what is called a strategic patience."

He predicted that the only outcome of the Saudi coalition’s war is failure: "After 28 days of aerial and naval bombardment, fierce airstrikes and all forms of intelligence and logistical support that was offered by the US, they failed to restore Abed Rabbo Mansour Hadi to Yemen, as he is still in Riyadh, and because of this aggression, Abed Rabbo Mansour Hadi has lost any chance to return to the presidency, and any political settlement cannot return him to the presidency."

On Iran’s readiness for dialogue, Nasrallah indicated that Tehran is ready to talk with Saudi Arabia, yet it is Saudi Arabia that is “being stubborn because it has failed in all countries, in Iraq, Syria and Lebanon, and it is seeking a success before sitting down at the negotiation table."