What is behind UAE deportation of Lebanese nationals?

Although UAE authorities maintain that the recent decision to deport dozens of Lebanese nationals was made over security concerns, others believe that political alignments may have played a role. 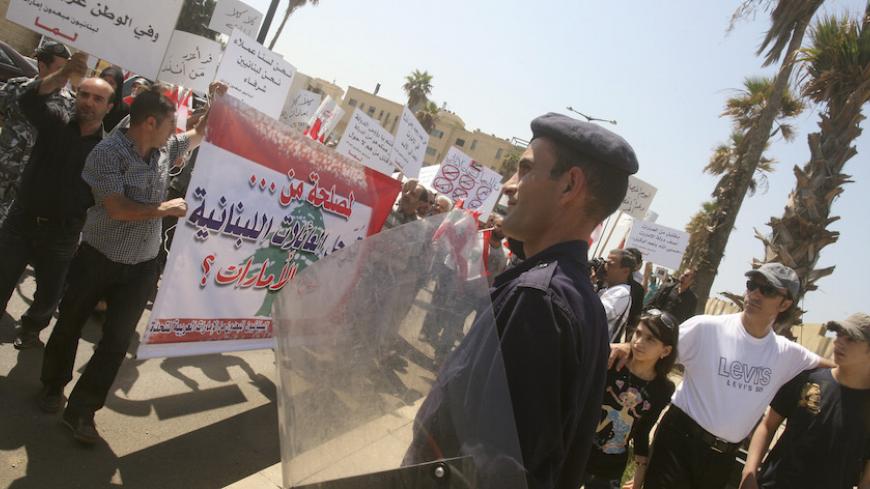 A Lebanese policeman stands guard as Lebanese Shiites, who said they were forced to leave the United Arab Emirates for security reasons, hold banners during a protest to demand their rights in front of the UAE Embassy in Beirut, May 5, 2010. - REUTERS/Sharif Karim

BEIRUT — The decision by the United Arab Emirates (UAE) in March to deport 70 Lebanese residents, most of them Shiites, giving them a deadline of less than 48 hours to leave, came as a surprise to Lebanon. This is not the first time that Lebanese have been deported from Gulf states — in 2009 the UAE deported dozens of Lebanese Shiites. At the time, the reason behind this decision was said to be suspected links with Hezbollah. There have also been other deportations, in 2012 for instance, but no reason was given then. In 2013, Qatar deported 18 Lebanese based on a decision issued by the Gulf Cooperation Council states to impose sanctions on Hezbollah as a result of its military intervention in Syria alongside regime forces. However, this is the first time that such a large number has been sent home at the same time, and at such short notice.

With each deportation, fear spreads among Lebanese citizens of various sects in the Gulf states. Information is still circulating in the press about other impending deportations.

So what are the reasons for this latest move? The Lebanese Ministry of Foreign Affairs and Emigrants was quick to issue a statement on March 13, saying, “The Lebanese present in the UAE are fully integrated into Emirati society; they abide by Emirati rules and are a positive and prosperous factor in this dear country.” The issue was a priority item on the agenda of the council of ministers’ meeting held on March 19, and it was decided to follow up on the matter with the UAE authorities.

For his part, following a meeting with the ruler of Dubai, Lebanese Prime Minister Tammam Salam said, “Lebanese are not targeted in the UAE. The decision to deport 70 Lebanese comes in the context of security measures taken by the state.”

A ministerial source closely following the situation told Al-Monitor on condition of anonymity that Lebanon is continuing to monitor the issue, and that the response from the UAE Foreign Ministry, when asked about the reasons for the deportation, indicated that those deported had committed violations. The nature of these violations was not elaborated on, but they were said to be of the type that “harms the security of the UAE.”

Is this an acceptable answer when it comes to dealings between countries? “Yes,” replied the source, noting that diplomatic channels are used and it does not constitute a breach. He said that further investigation revealed that the deportation was not limited to Lebanese alone, but also included individuals of other nationalities, such as Egyptians and Indians, and in greater numbers. Meanwhile, the source denied that the majority of the deportees were Shiites, as reported in the press, saying that they are from various religions and sects. He added that the state is continuing to handle the matter quietly, not by taking a public position, and there was no need for Lebanon to confront the UAE over the situation.

“Contacts made by Lebanon with the UAE, especially through the Ministry of Foreign Affairs, succeeded in reducing the negative impact of the UAE [deportation] decision to a minimum and stopped other similar steps, at least for the foreseeable future,” said the source, who revealed that the number of Lebanese who returned from the UAE was 35, not 70 as stated in news reports.

While he did not rule out that the conflict in the region and its ensuing political alignments were among the reasons behind the move, he expressed his wish that the UAE and all Gulf states would separate the regional conflict and the issue of the Lebanese communities present there.

Hassan Alian, the head of the Committee of Deportees from the UAE, has a different opinion. Alian formed this committee after his deportation in 2009, and works to provide legal assistance to Lebanese deported from the UAE. It constantly calls on the Lebanese government to defend its citizens in the UAE.

Speaking to Al-Monitor, Alian described the move as “a political decision manifesting as a security one.” He asked, “If these Lebanese had actually committed violations, why were they not indicted? Why were investigations not conducted? Why were they not brought before the courts and sentenced, in the event that the charges against them were proven true?” Alian said that issuing decisions based on intent is unacceptable, describing the action as “arbitrary.” He stressed that there is no law anywhere that allows for such actions, and pointed at the latest work by his committee led to the freezing of the deportation of the 35 remaining Lebanese until the end of the academic year.

Alian recounted his own experience of being deported from the UAE. He said that after 27 years in the UAE, where his four children were born, he was summoned by the Immigration Office's violations department. There, with no explanation, he was told he had to leave the UAE, and his passport was stamped with “departure for one year.” But experience shows that whoever is deported from the UAE is prevented from ever returning again, according to Alian, who recounted that some deportees try to return to the UAE, but their requests are rejected. He said that when he asked for the reason for his deportation, the response was merely that there was a deportation request from the higher authorities. He was given one month to leave the country.

Alian said that the mass deportation in March, with a 48-hour deadline to leave, created a humanitarian crisis. He said that after establishing lives in the UAE, the individuals require months to settle affairs prior to departure, especially financial obligations. He added that such a decision brings the affected individuals significant material losses and leaves them without a job, while having to settle financial dues. Moreover, he said that they have no option but to appoint a relative to follow up on their affairs in the UAE after they have left. Those who are not able to appoint a representative are even worse off — in addition to other issues, banks pursue them for unpaid debts. This is where the committee comes in.

Why do most deportees keep quiet about their predicament and avoid talking to the press? According to Alian, before their departure from the UAE they were intimidated by the authorities, and they fear their relatives who are still there could be deported if they speak up.

This mass deportation of Lebanese citizens from the UAE constitutes yet another social and economic burden on Lebanon, which is already suffering from an economic crisis and limited job opportunities.