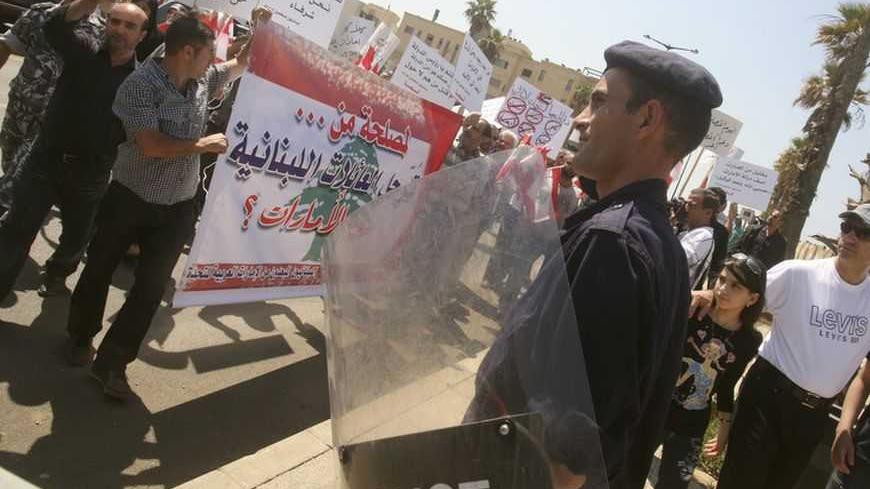 Lebanese Shiites who said they were forced to leave the United Arab Emirates because of purported security reasons protest in front of the UAE Embassy in Beirut, May 5, 2010. - REUTERS/Sharif Karim
February 25, 2013

Sources have revealed to Al-Monitor that authorities in the United Arab Emirates recently informed approximately 125 Lebanese citizens residing there on work permits that they must leave the country. The officials refrained from telling the deportees the reasons behind their deportation.

A policy of expatriating Lebanese nationals from the UAE has been in force for two years. The Lebanese Foreign Ministry says that the UAE will only say that the expulsions are for security reasons. Many expatriated Lebanese, the majority of them Shiites, emphasize that they have not committed any violations against Emirati security and that they had announced their willingness to appear before a court in the event that authorities had evidence to the contrary. The 125 individuals notified of their impending expatriation were given one week to settle their affairs in the UAE, after which all property registered in their names would be expropriated. This action is part of a growing campaign being conducted by the UAE against Lebanese nationals, especially Shiites, out of the fear that they may have ties to Hezbollah or the Iranian Revolutionary Guard.

Separately, Al-Monitor has learned that the September 11 attack on the US Consulate in Benghazi last year was almost replicated on the Iranian Embassy in the Libyan capital of Tripoli. Approximately three weeks ago, the Iranian Embassy in Tripoli was warned about unconfirmed information that Libyan Sunni Islamist militants were planning to storm the embassy, kill those inside, and set the premises ablaze. Embassy officials took the issue to Libyan government authorities, but were told that in the event of such an attack, the government would be powerless to protect the embassy given the Salafists sophisticated weaponry and popular support.

The reason behind the planned attack can be traced to the widely held belief that the Iranian religious authorities have sent Lebanese and Iranians to spread the teachings of Shiite Islam in Libya, which is predominantly Sunni Muslim. Salafist sheikhs, led by the Association of Muslim Scholars, have been propagating these claims in Libyan newspapers and television programs. Sheikh Sadiq al-Ghariani, the mufti of Libya, has put his full weight behind the issue, having repeatedly warned in recent months of “a Shiite onslaught on Libyan minds.” He called this alleged campaign tashiiya`, which in Arabic means "Shiitization" (or "funeral"), and accused Iranian authorities for being “the group behind it all.” Iran's ambassador to Libya, Hossein Akbari, is said to have recently scheduled an urgent meeting with Sheikh Ghariani to explain to him that the claims that Iran was conducting such a campaign in Libya were entirely baseless. He asked that he help defuse the charged atmosphere among Salafist in order to prevent an attack on the Tripoli embassy.

The campaign against Iran is said to be affecting expatriate Lebanese Shiites living in Libya. Lebanese nationals who have left Tripoli say that Libyan authorities are systematically persecuting them. One Lebanese citizen says that he was prevented from entering the country by Libyan security authorities after having arrived at the Tripoli airport. He was led to a back room in the airport where his interrogator, a security officer, asked him questions regarding the reasons for his coming there. After he presented the officer with all the necessary papers proving legitimate reasons for entering Libya, the questions became blunter. He asked, “Are you Shiite? Do you reside in the Hezbollah-controlled southern outskirts of Beirut? Have you previously visited Iran?” Despite the fact that he replied in the negative to all of these questions, the officer apologized and informed him that he must leave the country aboard the first plane headed for Beirut.

The Lebanese Foreign Ministry recently demanded an explanation from its Libyan counterpart for the recent actions of Libyan authorities. The Libyans responded by saying that the measures were taken based on information received by its security apparatus regarding the existence of Iranian groups, with Lebanese nationals among them, that came to Libya to propagate Shiism.