Due to alleged security concerns, the United Arab Emirates has adopted a policy of deporting many of the nation’s Lebanese expatriates, causing both economic and emotional hardship, writes Nasser Chararah. 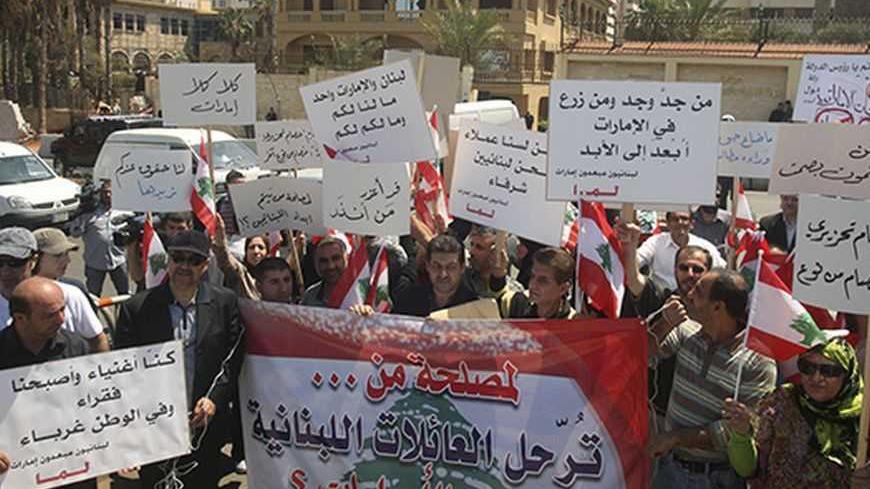 Lebanese Shiites, who said they were forced to leave United Arab Emirates for security reasons, hold banners during a protest in front of the UAE embassy in Beirut in 2010. - REUTERS/Sharif Karim

Every week from Friday morning until Sunday morning, Lebanese families living in the United Arab Emirates for their jobs experience “a period of tranquility.” This time is the official weekly holiday there, but the main reason for their calm is that Emirati state security observes this holiday. On these days, no calls will be made informing Lebanese families that they are to be deported from the UAE for alleged security reasons.

Lebanese there consider these days off to be more than “a relaxing holiday” — it is a “break from the daily angst” which hovers over them during the work week. This anxiety stems from their shared fear: at any moment, they may be contacted by the police department and told that they are being expelled.

With the advent of the new year, the campaign of expelling Lebanese, most of whom are Shiites, will have stretched on for nearly four years. The campaign began quietly when Emirati state security heard that Hezbollah had welcomed two Emiratis into their stronghold in Beirut’s southern outskirts who plotted to commit terrorist acts against the Emirati regime. There are no traceable documents confirming this lead, which of course Hezbollah denies. However, the deportation campaign has recently developed into something far more sophisticated than a mere reaction to an alleged threat, whether or not that threat is real.

Many of the grievances regarding this campaign revolve around the fact that it is conducted largely by police without legal justifications or procedures, and happens whether the deportees are individuals or entire families. This has made Lebanese families' lives in the UAE “fraught with anxiety,” due to “the likely scenario they will be deported at any moment” — that is, except on Thursdays and Fridays. Even worse, the psychological symptoms of this anxiety affect children, who hear about UAE authorities suddenly deporting their relatives and worry that the same fate will befall their loved ones without warning.

According to a Lebanese doctor who works in an Emirati clinic, Lebanese children have truly become “child migrants,” due to the frequent, sudden deportations of families close to them. The looming fear has transferred to the children, and they now suffer from the pains of alienation and homesickness that usually only affect migrant adults. The same doctor is considering submitting a report to the Lebanese Foreign Ministry to draw attention to the seriousness of the crisis's psychological impacts that will continue as long as a the emigrants' political and security status remains elusive.

Lebanese deported from the UAE have shared details about their experiences with the repeated deportations. They say that it is done without warning. The person slated to be expelled is summoned to state security offices and told that, for security reasons, he and his family must leave the country within 48 hours. This is done without any reference to official charges and without allowing recourse to a lawyer. Moreover, the abruptness of the procedure does not even give a deportee the chance to settle business and private affairs.

Hundreds of Lebanese families have been deported from the UAE in this manner. At first, most deportees were Shiites, but recently this has expanded to include all Lebanese, regardless of religious background. For its part, the UAE explains this policy by claiming that Hezbollah and the Iranian Revolutionary Guard operate among the Lebanese community in the UAE. Meanwhile, the Lebanese government’s approach to the UAE has been tempered. Lebanon has stated that it would not oppose the deportation of Lebanese who were proven security threats to the UAE. However, it also stated that it has reservations regarding Abu Dhabi’s tendency to collectively punish Lebanese expatriate workers under the guise of combating sleeper cells in the community, and regarding the general treatment of Lebanese as guilty until proven otherwise.

Sources in Beirut say that unofficial initiatives to halt this crisis have been undertaken recently, but to no avail. According to the sources, after being contacted by Beirut, UAE authorities would temporarily reduce the frequency of expulsions, but ultimately return the levels to where they had been. In the end, the expulsions carry on unimpeded.

According to sources in Hezbollah, for the past ten years the UAE has carried out an expulsion plan aimed at purging its society of all Lebanese — Shiites in particular — residing amongst them. During a private trip to Lebanon, an Emirati official, who preferred to remain anonymous, denied the existence of any such plan. He pointed to the fact that when Nabih Berri, the speaker of Lebanon's parliament, visited the UAE to discuss the crisis, Emirati officials provided him with information about security practices which were detrimental to the Lebanese community.

During the past month, more families expelled from the UAE have arrived in Beirut. Most of them came to Lebanon with nothing but what they could carry in their personal luggage. One of the deportees, Mohammed, who is originally from the city of Tyre in Lebanon’s Shiite-dominated south, said that he received a phone call from an unregistered number one morning last month. The caller, a security officer, asked that he immediately come to the nearby police station. On his way there, Mohammed noted that a car was tailing him, which turned out to belong to Emirati security. At the station, the Emirati officer told him that he had been slated for expulsion due to security reasons, and added curtly that he had 48 hours to leave the country.

About five years ago, Mohammed had bought a clothes shop in Dubai. For the several hours following his release from the station, he attempted to sell it, but it was impossible under the time constraints. In the end, he vested one of his Lebanese friends still residing there with nominal agency over the store, a practice which has become customary among Lebanese faced with immediate expulsion.

Mohammed not only suffered material losses, but he also had to endure the agony and humiliation of choosing the words to inform his wife that they were being deported. He was aware of the despair that would overwhelm her on learning that their years-long struggle to build better lives for their family abroad had been torn to pieces in only a matter of hours. Migrating in search of work is considered an old Lebanese pastime.

It is said that there are 12 million Lebanese scattered abroad, compared to the 4 million Lebanese who reside in Lebanon. A large proportion of the diaspora were born abroad after their parents had emigrated in the early stages of the last century. These are the second-generation Lebanese emigrants, and they hold little hope of returning to their homeland.

This story-cum-saga encompasses the history of Lebanese migration, for migration to the UAE constitutes only a small portion of overall migration, with only 80,000 Lebanese migrants to the UAE. Yet the UAE represents an important destination for two reasons. First, compared to the Lebanese migrants of Europe, Africa and the Americas, the UAE afforded substantial remittances for those working there. Second, it is geographically close to Lebanon, making return to their country and their families a near certainty.

Nasser Chararah is a contributing writer for Al-Monitor's Lebanon Pulse, head of the Lebanese Institute for Studies and Publications, a writer for multiple Arab newspapers and magazines, author of several books on the Hezbollah-Israeli conflict, and has worked for the Palestinian Research Center.