Will Netanyahu stand in the way of Kahlon's reform plan?

Future Finance Minister Moshe Kahlon fears that Prime Minister Benjamin Netanyahu will block the reforms he is planning, which is why he insisted on a much-detailed coalition agreement with unprecedented responsibilities in finance, housing and banking. 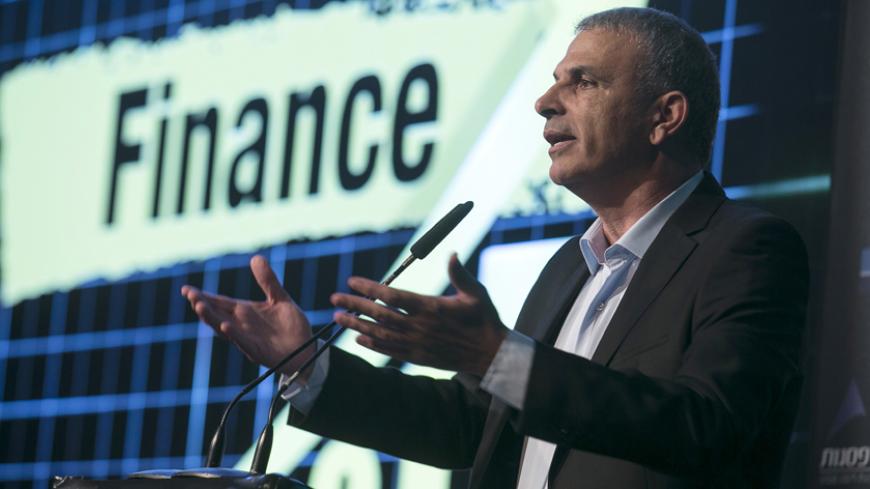 As he sat listening to his future Finance Minister Moshe Kahlon on the evening of April 29, Prime Minister Benjamin Netanyahu’s body language relayed a certain sense of impatience. After 43 days of focused and often shrewd negotiations with the chairman of the Kulanu Party, the two men announced that their parties would be signing a coalition agreement. Netanyahu sat beside Kahlon, his hands resting on the table and his fingers drumming rhythmically without him even noticing it. Meanwhile, Kahlon listed all of his achievements so far. There were many, and they were respectable.

Kahlon is hardly a great orator. Netanyahu and Yesh Atid head Yair Lapid are both a thousand times better than him. Nevertheless, when anyone has such an impressive list of achievements, it is easy to see that he has the upper hand, even if his style of speech is laconic and boring.

Never has there been another finance minister in Israel with so much authority and so many means to succeed. Even Netanyahu, who was appointed to the post in 2003, did not have all the power that Kahlon now has.

Kahlon will be the first finance minister to head the Israel Land Authority, which will be transferred to him from the Housing Ministry, and the Planning Administration, which will be transferred from the Interior Ministry. He will also head the Housing Cabinet. The Kulanu Party will also receive two additional ministries: the Ministry of Housing, which will go to Maj. Gen. (Res.) Yoav Galant, and the Ministry of the Environment. His party will also chair the Knesset’s Welfare Committee and receive a 7 billion Israeli shekel (about $1.8 billion) budget to combat poverty. Furthermore, Kahlon asked for and received the right to veto any Basic Laws and infringe on the powers of the Supreme Court, and to veto the Nationality Law, which Netanyahu promoted during his last term.

At the signing ceremony, Kahlon focused on his achievements, intending to lay the groundwork for far-reaching reforms to the banking industry and the housing market, and to reduce socio-economic disparities between different sectors of the population. He thanked the prime minister, using the term “cooperation” no less than five times. “We received the tools we need, and we anticipate with confidence that we will receive the cooperation of the prime minister, the members of the government and all Knesset members, including those in the opposition,” Kahlon said. This repeated itself again and again, with the future finance minister even using it to conclude his remarks: “I’d like to thank the prime minister for his openness, his cooperation and the possibility he has afforded me to take the lead on these issues. I have already mentioned how I anticipate cooperation. All we need now is cooperation to ensure that we succeed.”

All of this was intended for one man in particular: Netanyahu. Kahlon is intimately familiar with Netanyahu’s capacity to interfere with, damage and torpedo his plans. He experienced it personally in the past, and he watched as Netanyahu caused former Finance Minister Lapid to fail and then fired him without even batting an eyelash, even though Lapid led a much stronger bloc of 19 Knesset seats.

What was Netanyahu thinking as he watched Kahlon vaunt his enormous victory, while he sat off to the side, as if he was part of the backdrop? Did the prime minister really believe what he was saying, when he talked about all the great things he would do with the new finance minister to benefit all the citizens of Israel? Was the bear hug that he gave Kahlon little more than a strategic maneuver, when he really plans to trip him up in the future and send Kahlon’s grand promises crashing back down to reality? At this stage, it is still too early to tell whether Kahlon will obtain the cooperation he wants from the chairman of the Likud. After all, Netanyahu still sees him as a genuine threat to his position as prime minister in the next elections — maybe even from within the Likud.

There is a stark difference between Kahlon and Lapid. Kahlon is intimately familiar with Netanyahu and the way he operates. This is why he made a point of putting together a very precise and detailed coalition agreement, which would make it much more difficult for the prime minister to interfere. A source close to Kahlon told Al-Monitor, “Netanyahu knows that at any given moment, Kahlon can threaten him and carry out that threat. He won’t stay in the government if Netanyahu starts interfering, and Netanyahu knows that Kahlon would have no problem leaving. He already did that when he quit the Likud Party. That is why this is a very different game.”

Kahlon is also well aware of how the Knesset operates from his days as chairman of the Economics Affairs Committee. He therefore took advantage of the signing ceremony to send a clear message to the opposition as well: “We expect cooperation from the opposition too, since the reforms that we are talking about are nonpartisan. They do not favor one sector over another. They are intended to help and benefit the citizens of Israel — all citizens of Israel, in the cities, towns and villages, in the north and in the south, in Tel Aviv and Ramat HaSharon, regardless of race, gender, religion or nationality. That is why I anticipate the help of parties in the coalition and the opposition.”

This appeal was directed mainly at Lapid, who has already positioned himself as the socio-economic opposition to the new government. It was an important statement, too. According to many of the election polls, Kahlon is the politician who receives the highest marks from the public, because of his success in reforming the cellphone market. Lapid, who will now have to get used to sitting in the wasteland that is the opposition, shares the same social protest supporters as Kahlon, and is likely to be both a challenge and a nuisance. Over the past few days alone, he already managed to call on Kahlon to prevent the expansion of the government and spoke out, as expected, against Netanyahu’s surrender to ultra-Orthodox demands that criminal sanctions against those who violate the Enlistment Law be eliminated.

Politically, Lapid should be praying for Kahlon to fail. Kulanu’s success in implementing even some of its programs and reforms would underscore Lapid’s failure and make it harder for him to get stronger. Familiar as he is with Lapid’s marketing and campaign skills in the opposition, Kahlon is sending a conciliatory message to him and all the other social advocates in the coalition and the opposition.

The coalition agreement between the Likud and Kulanu lies at the heart of Netanyahu’s fourth government, and Kahlon is the most powerful person in that government. Since it is a right-wing ultra-Orthodox government, there are no expectations that it will make any progress on the diplomatic front. However, when it comes to the socio-economic agenda, this government offers a second chance for the social protest of 2011. Kahlon is now replacing Lapid as the person everyone is watching. He knows as well as anybody that when it comes to Netanyahu, promises are one thing and practice is another. And when it comes to Netanyahu, Kahlon is well aware that he must always remain vigilant.