UNRWA takes no responsibility for rocket launchers in shelters

The Board of Inquiry report concerning the strikes at UNRWA facilities during Operation Protective Edge fails to address that the agency’s officials turned a blind eye to Hamas militants' use of the facilities as weapon depots. 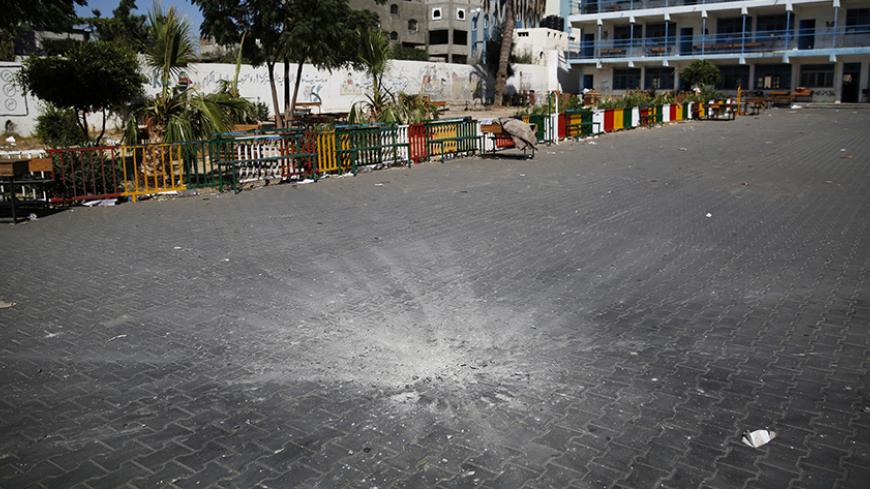 A crater marks the center of a courtyard at a UN-run school sheltering Palestinians displaced by an Israeli ground offensive that police said was hit by an Israeli shell in Beit Hanoun in the northern Gaza Strip, July 24, 2014. - REUTERS/Finbarr O'Reilly

UN Secretary-General Ban Ki-moon published a summary report of the Board of Inquiry on April 27 concerning the strikes from facilities of the United Nations Relief and Works Agency for Palestine Refugees in the Near East (UNRWA) in the Gaza Strip during Operation Protective Edge in July-August 2014.

The full 207-page report is the outcome of the work carried out by the Gaza Board of Inquiry headed by retired Maj. Gen. Patrick Cammaert, a senior Dutch officer who served as commander of the UN forces in the Eastern Democratic Republic of the Congo and as the military adviser to the UN secretary-general. When Cammaert was assigned for the job in November 2014, Israel decided to cooperate with the Board of Inquiry and provide it with all the necessary information evincing that UNRWA facilities in Gaza were turned into Hamas weapons depots and even used to fire rockets at Israel.

The summary that the UN secretary-general published relates to the first installment of the Board of Inquiry investigation and addresses only the damage to UNRWA facilities. A letter from the UN secretary-general was appended to the summary, in which Ban writes: “I deplore the fact that at least 44 Palestinians were killed as a result of Israeli actions and at least 227 injured at United Nations premises being used as emergency shelters.” He expressed his dismay that “Palestinian militant groups would put United Nations schools at risk by using them to hide their arms.”

But the secretary-general’s dismay should have included not only the “militant groups” (Izz ad-Din al-Qassam Brigades) that imperiled UN facilities, but also that UNRWA employees in Gaza probably knew that the agency’s facilities were being used to conceal Hamas weapons. Yet, they chose not to issue any warnings nor did they do anything about it. It would be inconceivable that the agency’s employees were unaware that rockets and mortars were being stashed there. Hamas militants would not have been able to conceal the weaponry cache inside UNRWA schools and storerooms without the agency’s employees seeing the activity or possibly even assisting.

Since the June 2007 coup staged by Hamas in the Gaza Strip, there has been a reciprocal relationship between UNRWA and the movement. Hamas knows full well that were it not for UNRWA activity in Gaza, the residents would suffer from hunger, leading to a humanitarian crisis that would jeopardize Hamas rule, which is unable to provide even the bare necessities. There appears to be a tacit collusion, whereby UNRWA provides victuals for the daily sustenance of nearly 800,000 residents, who make up almost half of the population in Gaza, while Hamas feels exempted from taking care of the civilian population for which it is responsible as the sovereign on the ground. Instead, the movement invests its resources and energy in armament, military build-up, development of weapons and tunnel digging. UNRWA, unfortunately, appears to serve as a fig leaf, whose existence allows Hamas to control Gaza while letting UNRWA shoulder the burden of civilian responsibility as a representative of the United Nations.

Eight months have passed since the conclusion of Operation Protective Edge and the UN has yet to learn the lessons or take responsibility for the fact that its agency’s facilities and storerooms, including the schools that were designed to support the Palestinian population in Gaza, served as Hamas weapons depots. The UNRWA director in Gaza, Robert Turner, should have taken responsibility for putting the civilians at risk; he should have either resigned or been dismissed.

During Operation Protective Edge, the agency’s spokesman in Gaza, Chris Gunness, appeared in an Al Jazeera studio, sobbing during a live interview when talking about the civilian casualties that found shelter at UNRWA facilities, wounded by the strikes of the Israel Defense Forces (IDF). “We notified the IDF 17 times about the location of the building,” another UNRWA official told the media, wondering why the bombing was carried out nonetheless. He did not intimate in the slightest the personal responsibility of UNRWA’s management in Gaza for imperiling civilians — and this, by virtue of the fact that the agency's members apparently knew what was going on but kept mum nevertheless.

The UN summary report blames Israel for hitting seven facilities. It holds it accountable for the death and injury of civilians who had hoped to find shelter in UN facilities that were considered safe. While Ban did express dismay that the facilities that were designed to serve as humanitarian shelters were exploited by militant groups, no conclusions were in fact drawn, no one has taken responsibility, nor has a comprehensive organizational change been implemented in the agency and its deficient management, despite the proven connection between UNRWA employees and the “militant groups.”

And there is another point that should be highlighted: Israel, as noted, cooperated with the Board of Inquiry that looked into the strikes at UNRWA facilities. However, it cooperates much less with the larger Board of Inquiry nominated by the UN Human Rights Council that reviews the events of Operation Protective Edge.

Incidentally, Israel adopted a rather similar approach with regard to the committee that was appointed in the aftermath of Operation Cast Lead (2008-09), as a result of which it had to cope with the allegations in the Goldstone Report following its publication.

The fact that Ban appended a letter to the report is unquestionably the result of the Israeli cooperation with the board's investigators and the submission of findings that proved beyond a shadow of a doubt that armed Hamas militants treated UNRWA facilities and storerooms as their own. It's a shame that Israel has decided not to cooperate with the “larger board” and will have to deal with the allegations once the report is published.