Bedouin youths continue to demonstrate their commitment to Israel by enlisting, despite growing tensions with Jewish society as the demolition of Bedouin homes continues. 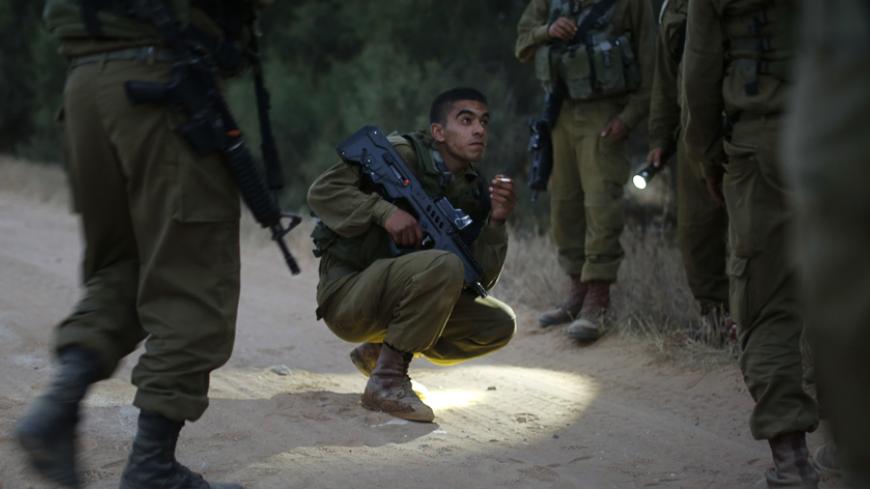 Amid the many April 22 Memorial Day ceremonies for Israel's fallen soldiers, there was one unofficial and unusual event in Ka'abiyye, a Bedouin village in the north of Israel. The initiative to hold a memorial procession there came from Muhammed Ka'abiyye, a resident who thinks that the fallen Bedouins who have proven their loyalty and love to Israel — their state — deserve a special memorial service as well.

Every year, a memorial service for the fallen Bedouins is held at a monument for a Bedouin fighter, located at HaMovil junction in the lower Galilee region. Yet, Ka'abiyye says that the young members of the community who enlisted with the Israel Defense Forces (IDF) as well as bereaved families feel that the State of Israel does too little to commemorate the contribution of the Bedouins who fell during Israel's wars.

When people talk about the legacy of the combatants from the Bedouin sector, they usually refer to the late Lt. Col. Amos Yarkoni, the highly venerated Bedouin tracker who devoted his life to the IDF, becoming a much-admired and inspiring figure. A member of the Bedouin al-Mazarib tribe from an area near the Jewish community of Nahalal, Yarkoni was born under the name Abd el-Majid Hidr. When he enlisted with the IDF in 1948 upon the establishment of the state, he changed his name. He set up an elite IDF tracker unit that later became known as the Shaked Desert Reconnaissance Battalion, which is deployed mainly along Israel's southern border. Even today, Bedouins serving in this unit study his legacy and decorated service. Yarkoni was awarded the Medal of Distinguished Service as well as the Medal of Courage.

A whole generation of Bedouin youths joined the IDF and followed in his footsteps. Over time, however, and especially in recent years, a deep rift has erupted between the State of Israel and the Bedouin population in the south, against the backdrop of the demolition of houses in unrecognized communities. The number of Bedouin recruits has dropped, leaving many in the Israeli public with the misguided impression that the Bedouins' loyalty to the state is questionable. But along the Gaza and Egypt borders, the Bedouin battalion continues to operate. Its soldiers all volunteer with the IDF despite the atmosphere in their communities and sometimes contrary to the mindset in Bedouin society that drafting by the IDF is inappropriate.

Bedouin society, mainly in the south, finds itself in a deep crisis of trust with the state's law enforcement agencies over fundamental questions of their standing and rights as full-fledged citizens. It was in the context of this strife that Ka'abiyye introduced his initiative to organize a commemorative procession on Memorial Day with a message of brotherhood and unity with the entire Israeli public. The procession's participants waved large Israeli flags to invoke the memory of some 200 members of the Bedouin community who fell during Israel's wars and to show the Israeli public that despite the differences and tensions, the contribution of the Bedouin citizens to Israel continues to this day.

"What we have here is a population that tied its fate to the State of Israel well before its establishment, yet we don't see the kind of support we deserve," Ka'abiyye explains to Al-Monitor. Having served in the Israeli air force, he is now a student of Middle Eastern history at Haifa University. He also mentors young recruits in his village on behalf of the Aharai! (Follow Me!) organization, which encourages young leadership and prepares young Bedouins to join the military.

"We want our voice to be heard. We want people to know that we're doing what's required of every other citizen our age. There isn't a single IDF induction class without at least one recruit from Ka'abiyye, even though we are a small community," he observes.

Al-Monitor:  Do you feel Israeli?

Ka'abiyye:  We'd like to remind everyone that we're full-fledged Israelis. When someone brandishes the Palestinian flag in Nazareth or in some other Arab community, it turns into a big deal. We want to show that there's something else, too: Bedouins who identify with the state and feel great pride. Marching through the village in broad daylight with hitched horses leading the way and a large Israeli flag is no ordinary scene.

Al-Monitor:  When Bedouin youths from the north enlist with the IDF, does this not lead to tension with the Bedouins from the south who are at loggerheads with the authorities?

Ka'abiyye:  No, it doesn't. They, too, enlist with the IDF, although in smaller numbers, yet we share a brotherhood and partnership. But I have to admit that the situation in the north is different from the situation in the south. Because of the house demolitions and the great tension, the situation there is getting worse, which is why we're holding our procession and also encouraging enlistment with the IDF. We don't want to get to where they are at.

Al-Monitor:  When a young Bedouin comes to the recruitment preparatory course, what are his expectations?

Ka'abiyye:  Our youths don't know much about the military. Usually, these young people come to us because some other family member has served in the IDF or a friend came home on leave wearing his uniform. Our job is to connect them with the military, make the induction process easier on them, to make them feel that once they get to the army, they will be familiar with what is happening around them. A Bedouin youth enlisting with the IDF fights one war on the battlefield and a second war in the hostile Arab society, which fights him because he joined the IDF. What we wanted to do during the procession was to highlight both the volunteerism as well as the difficulties, but also of course to encourage greater enlistment, which has been declining — perhaps even double the number of inductees.

Al-Monitor:  How many youths are there in your group?

Ka'abiyye:  My group has some 25 recruits and together with the communities around us, we reach about a hundred students. This is the first year that an enlistment preparatory class is taking place in Ka'abiyye. We do all sorts of activities. We visited soldiers on base and gave out candy. We invited a Holocaust survivor to our activity and heard from her about the Holocaust. The students gave her a flower bouquet and promised her that the Holocaust would never happen again.

Al-Monitor:  When people in Israel talk about the enlistment of minorities and about blood brothers, they mainly refer to the Druze sector, where the percentage of recruits is high.

Ka'abiyye:  In my opinion, the focus should be on the Bedouins. Our youths volunteer for the military. The unit of Bedouin trackers is irreplaceable. Its soldiers lead the unit, and we do this with humility to this very day.