Although Shiite militia forces were withdrawn from the fight for Ramadi, they remain present and active in other areas of Anbar province. 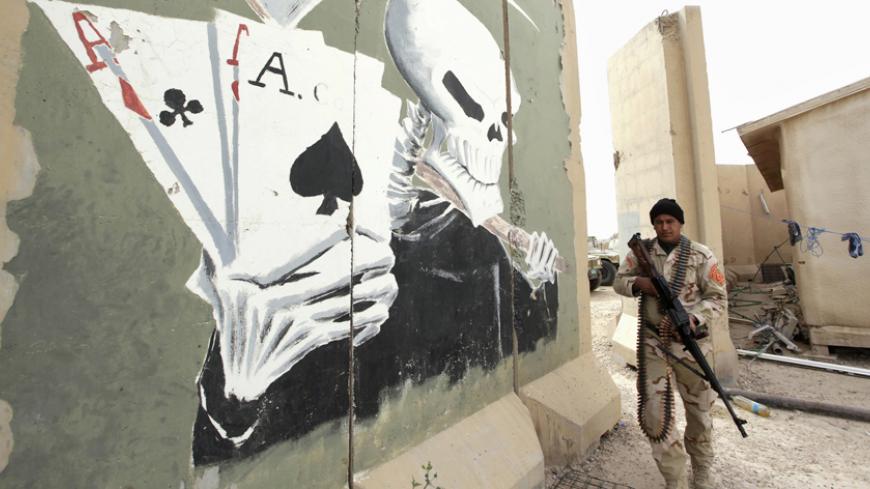 A member of the Iraqi security forces stands guard with his weapon at Camp Habbaniyah between the cities of Fallujah and Ramadi, March 12, 2015. - REUTERS/Alaa Al-Marjani

IBRAHIM BIN ALI, Iraq — The predominantly Sunni agricultural area east of al-Karma is dotted with dusty date palms rising amid slow-moving waterways, trenches and buildings used as temporary bases or abandoned in various states of destruction. The fight against the Islamic State (IS) will likely prove tougher in this province, Anbar, than any other in the Iraq.

The government-allied, primarily Shiite militias known as the Popular Mobilization Units played a key role in retaking sections of Anbar, but were reportedly withdrawn from around Ramadi, the provincial capital, beginning April 10 in response to a US demand. They, however, remain in positions in other areas of the province.

In the battle for Tikrit, the militias’ ground forces early on and US airstrikes later in the fighting proved crucial to the victory over IS there. Following reports of abuses by the militias in some liberated towns and local Sunni tribes’ opposition to the use of Shiite militias in the area, the United States is said to have refused to continue airstrikes near Ramadi unless the militias were withdrawn from the fighting.

On the front line near the IS-held town of al-Karma earlier this month, Al-Monitor watched as fighters from the Badr Organization — flying the militia's flag higher than that of the national Iraqi forces' on a protective earthen embankment — fired at IS positions. Sniper fire from the other side ensued. 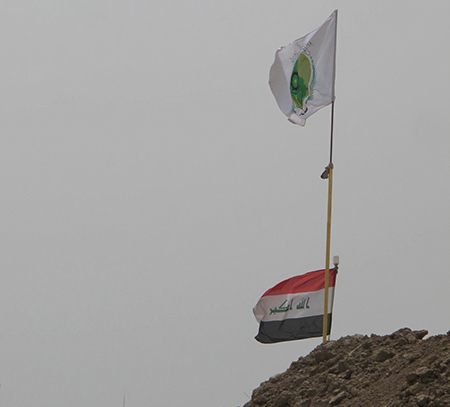 The Badr Organization flag flies above the Iraqi national flag on the front near al-Karma in Anbar province, Iraq, April 11, 2015. (photo by Shelly Kittleson)

Al-Karma, 10 miles northeast of Fallujah, was infamous during 2005-2007 for being the most violent place in Iraq. The city, which in 2008 had an estimated 260,000 inhabitants, is considered the “periphery” of both Fallujah and Baghdad, which made it a key location for the insurgency. It also has no city wall, unlike Fallujah, making it susceptible to unhindered movement in and out by insurgents. Marines who were stationed there therefore considered it “much worse than Fallujah.”

The Badr Organization is now officially part of the Popular Mobilization Units, whose militias have existed in one form or another for years and alongside volunteers are answering the June 13 call to jihad made by Iraq’s most prominent Shiite cleric, Grand Ayatollah Ali al-Sistani, after IS took the northern Iraqi city of Mosul. Clerics throughout the country spread news of the call in their Friday sermons. The armed wing of the Badr Organization, which morphed into a political party, has been accused of brutal tactics and is said to be heavily supported by Iran. It was created by the Iranian government during the Iran-Iraq War as the armed wing of the Islamic Supreme Council of Iraq.

Ali Zubaidi, media team member of the Shiite militias, told Al-Monitor that a new, rough earthen track is being used part of the way to the front line near al-Karma, as “the other road is filled with IEDs [improvised explosive devices] and hasn’t been cleared yet.” Moeen al-Kadhimi, senior Badr commander and spokesman, explained, “This area was taken only about 20 days ago.”

The contents of homes appear to have been ransacked since IS took the area last year. Sectarian graffiti such as “Ya Zahra,” a common Shiite rallying cry in reference to the daughter of the Prophet Muhammad, has been scrawled on some buildings retaken by the militias in the area.

Iraqi government troops were present alongside militia unit members in a nearby area used for firing mortars at IS-held territory, amid several former farmhouses now used to house soldiers or left unoccupied, Kadhimi said, “as they haven’t been cleared of explosives yet.” He added that the “nature of the fighting is mostly like this’’ in the area, with sniper fire and occasional mortars, except in “major offensives.”

At a base in the Ibrahim Bin Ali area, Kadhimi said, “Most of our losses in this area are from booby traps and IEDs.” He added, “About two weeks ago, one Iraqi officer on leave who volunteered during his time off to help his ‘brothers’ fighting here, an expert member of the bomb squad, was killed trying to defuse a bridge nearby,” noting that many Iraqi government soldiers moonlight with the militias.

Not far away, white letters on a hillside had been laid to form the name “Liwa Al-Shabab Al-Risali,” another of the Shiite militias active in the area. “Most of the area was taken by Badr, however,” the militias' media team stressed. Badr is the militia that agreed to take Al-Monitor to the front line.

During the ride to the front and back, the small convoy of vehicles included a flatbed truck with militia and Badr flags and stickers and fitted with loudspeakers blasting music vowing to retake Ramadi. The flags, however, are disapproved of by the very man who issued the fatwa to form the militias.

Ayatollah Said al-Hakim, Sistani's likely successor, told Al-Monitor in an interview in early April in Najaf that Sistani had made a statement calling for the militias to stop using their own flags and to exclusively use Iraq's national banner. When Al-Monitor pointed out that the militia flags were still being used extensively in the capital and outside it, he replied that one could only hope that the groups will listen. Hakim added that once the need for Iraqis to join the units ceases to exist, the fatwa “will end as well.”

During a brief interview in Baghdad, Sherwan al-Waeli, presidential adviser for security policy and a former national security minister, told Al-Monitor that once the war against IS concludes, unit “members that qualify as soldiers” would become a sort of national guard. For now, he noted, the militias are under the direct remit of the prime minister’s office.

Decisions about the extent to which the militias will be used, whether they in fact are responsible to any governmental or even religious authority and whether the fight has any hope of being won without them are of paramount importance. Meanwhile, areas of Anbar continue to be lost and regained, with the vast majority of the province still under IS control.