Rouhani: Police should not enforce Islam

Iranian President Hassan Rouhani has been criticized by conservative clerics for saying the police should enforce the law rather than Islam. 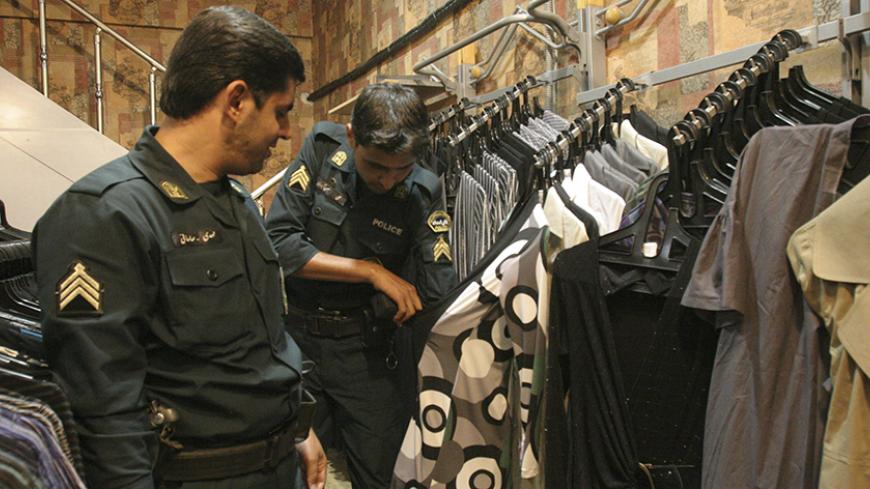 Morality police show examples of unacceptable women's clothing to the media during a crackdown on "social corruption" in Tehran, June 18, 2008.

Conservative clerics and media have criticized Iranian President Hassan Rouhani for saying that police should focus on enforcing the law rather than Islam.

At a gathering of Iranian police commanders April 25, Rouhani said: “Police do not have a duty to enforce Islam. No police officer can do something and say he did it because God commanded it, or the prophet had said so. It has nothing to do with the police.”

He continued, “The police only have one duty: to implement the law. That’s it.” He explained, “Some religious commandants are in the law, identically. And some are laws that parliament has approved that are not opposed to religious law. This is enough.”

As an example, Rouhani said that in Islam there is no commandment on whether someone should pray slow or fast. He said: “Can police interfere in this? Can he come into a bank and tell the bank’s president, ‘Close your doors, it’s noon and it’s the call to prayer.’ If someone is praying, can they go to him and say ‘Why did you pray fast?’ This has nothing to do with the police.”

The interpretation of the Islamic doctrine to “enjoin good and forbid wrong” is a controversial one in Iran. Some conservatives have attempted to legalize this doctrine, in effect creating vigilante groups that could enforce what they deem to be Islamic in society. Critics have argued this allows police and other security groups unprecedented interference in people’s daily lives.

Rouhani argued that instead of getting rid of poverty, unemployment and corruption, Iranian police and officials have focused too heavily on “two or three secondary issues in Islam.”

A number of conservative clerics and media criticized Rouhani’s comments. Ayatollah Nasser Makarem Shirazi said April 27 that Rouhani’s comments had “negative effects and were in no way appropriate.” He added that such statements will weaken the resolve of the police force to enforce Islamic laws and that it “is a green light to polluted individuals for various moral corruptions and dirty gatherings.” He continued, “I hope they take our friendly advice and after this do not repeat such statements.”

Ayatollahs Hossein Nouri Hamedani and Safi Golpayeghani also criticized Rouhani’s comments that police should not have a role in enforcing Islam.

Former Vice President Mohammad Ali Abtahi expressed support for Rouhani’s comments. On his Facebook page, he asked: “Why were these completely clear statements criticized by religious elders?” He wrote that if police think of themselves as a source of religious reference, or if they think a law is opposed to Islam and do not enforce it, “it would create chaos.” He added that it is the clergy, the seminaries and the government that would be the first to be damaged if police were to act in this way.

Ayatollah Ali Khamenei also addressed the police commanders at a speech April 26. The supreme leader told the commanders that “your job is a service to society, the people, the Islamic Republic and to Islam.” Khamenei said that he believes Iran’s police should be equipped to act with strength, but not to the level of police in America, which he called “oppressive.”