Protests have sprung up in Esfahan over the acid attacks that have terrorized the citizens there and concerns of potential leniency by authorities. 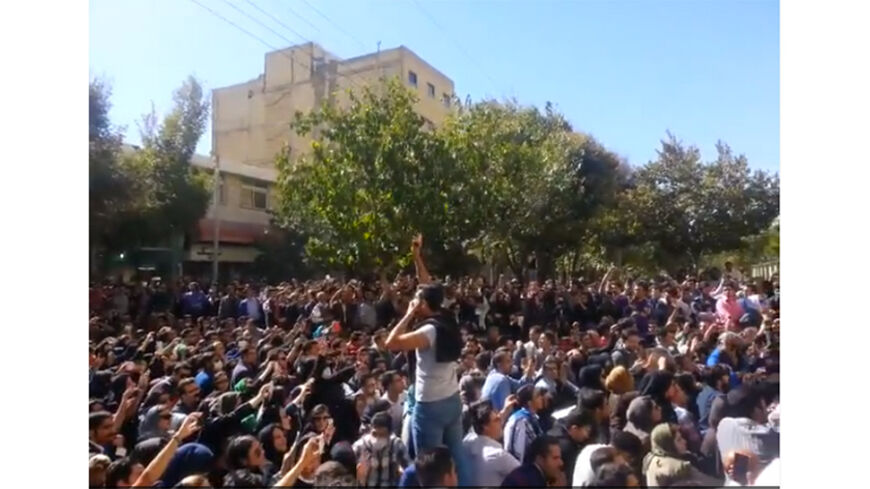 A still from a video shows protesters in front of Esfahan's Department of Justice shouting, "It's a lie, It's a lie" in response to a justice official's promise that the judiciary would deal firmly with the perpetrators of the acid attacks in Esfahan, Oct. 22, 2014. - Rooholah Zam
Arash Karami
@@thekarami
October 22, 2014

After the recent gruesome acid attacks on women in the city of Esfahan, Iranians have protested what they feel is lenient punishment for men who perpetrate violence against women and conservatives who obsess over female veiling.

The serial acid attacks shocked and horrified Iranian citizens. Two of the victims were shown and interviewed on Iranian television. One's face was completely bandaged. One side of the other's was disfigured. Another victim died from the attack. Iran’s Health Minister Hassan Ghazidadeh Hashemi, a well known eye surgeon, visited victim Soheila Joorkash and examined her eyes.

Videos have been posted online of a number of protests in Esfahan, where the attacks took place. Both men and women were present at the protests in front of Esfahan's Department of Justice building. In one video, an official asks the people for patience and promises that the judiciary will deal firmly with the attackers. The protesters responded, “It’s a lie, it’s lie.”

A number of prominent women’s groups and activists, including Narges Mohammadi, Nasrin Sotudeh and Noushin Ahmadi Khorasani, protested in front of parliament in Tehran. They chanted slogans such as “Acid attacks are a crime, lawmakers show support,” “A safe city is my right,” and “Death to [the Islamic State].”

The last chant criticized vigilante groups that have targeted women over poor veiling. Authorities have denied that groups such as Ansar-e Hezbollah or others enforcing the Islamic command of “enjoining good and forbidding wrong” were involved in these attacks.

In a speech today, Oct. 21, in the city of Zanjan, President Hassan Rouhani indirectly referenced these groups. He said, “There is no higher wrong than poverty, unemployment and creating discord,” adding, “The highest good is developing the country.” Rouhani did not criticize “enjoining good and forbidding wrong,” but said that the teaching should not be used by one particular group against another. Rather, he said, it’s a “mutual act” and all 77 million Iranians are in it together.

Before these attacks in Esfahan, parliament had sought to provide legal protection for individuals engaging in “enjoining good and forbidding wrong.” When they would harass a woman they felt was improperly veiled, it sometimes led to violence in which the men with the women attacked the instigator.

Despite the government's denials, many people feel that providing legal protection to these vigilante groups and the overwhelming emphasis of clerics in the country on women’s veiling has directly or indirectly led to these acid attacks.

While Iranian officials have widely condemned the attacks and four individuals were arrested, no authorities have yet said anything else about the case. Iran police chief Ismael Ahmadi Moghaddam said that while the suspects have been identified, their motivations are still not clear.

The attacks and the protest have been extensively covered in the Iranian media. Iranian Students’ News Agency published pictures of the Esfahan protests, and Fars News published an article headlined, “A history of 60 years of acid attacks.”