Iranian authorities have criticized domestic and international media organizations for suggesting the crimes may have been connected to veiling enforcement. 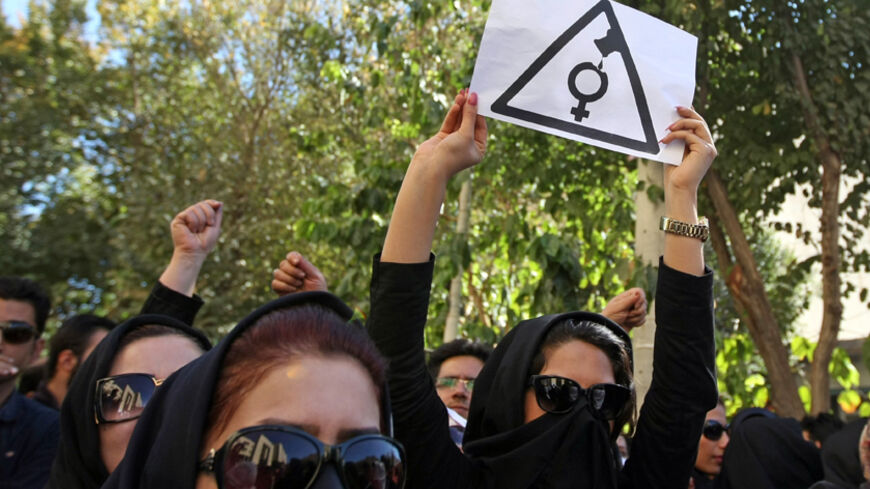 Iranian women, hiding their faces so as not to be identified, shout slogans during a protest in front of the judiciary building on Oct. 22, 2014, in Esfahan, in solidarity with women injured in a series of acid attacks. - ARYA JAFARI/AFP/Getty Images

Iranian media outlets that have covered the acid attacks on women in the city of Esfahan have been criticized for and warned about associating the crimes with "vice" groups enforcing Islamic values. While Iranian authorities have attempted to address concerns about the attacks, they have also warned domestic media outlets over their coverage.

The weekly 9 Dey, affiliated with conservative parliamentarian Hamid Rasaei, reported that those “who have a problem with the Islamic command ‘enjoining good and forbidding wrong’” are using the acid attacks as an “excuse.” The article blamed the BBC, which it referred to as the “news agency of the old imperial fox,” for being the first to suggest that the acid attacks were related to the enforcement of veiling by vigilantes.

Ansar-e Hezbollah had announced that it would take to the streets of Tehran to enforce Islamic norms, but later announced it had been dissuaded from doing so. The 9 Dey report blamed the BBC for reporting on Ansar-e Hezbollah’s first statement but not second. According to 9 Dey, after the BBC report, domestic media then followed its lead.

However, the website for Ansar-e Hezbollah, Yalasarat alHussein, republished an editorial from Kayhan, whose editor-in-chief is appointed by the supreme leader, blaming the Islamic Students’ News Agency (ISNA) for being the first to connect the acid attacks to veiling enforcement. The editorial also accused Reformist media organizations of using the acid attacks to “curse defenders of veiling and values,” which then led to non-Persian media outside the country to pick up the story and depict Iran “as divided,” condemning the “manufactured differences” presented in the media.

According to BBC Persian, four journalists from ISNA were arrested yesterday, Oct. 27. Two were later released, but Zahra Mohamamdi, ISNA’s editor for Esfahan, and Sanam Farsi, the community editor, are still detained. Aria Jaffari, the ISNA photographer who covered the protests in Esfahan, has also been arrested.

The reason for their arrests is not yet known, but ISNA’s coverage of the acid attacks, the protests and society's reaction has been some of the most extensive of all the Iranian news agencies.

The head of Iran’s judiciary denied any link between the attacks and a bill proposed by parliament that would give legal protection to "vice groups" that enforce Islamic laws. “Unfortunately, some Western countries have related this event to the ‘enjoining good and forbidding wrong’ and this is a strange oppression and persecution,” said Ayatollah Sadegh Larijani, adding that “it was worse” that domestic media did the same.

Esfahan's governor also said that the police are pursuing the case and “Any type of gathering on this issue is illegal and individuals who create rumors or take actions that disturb the calm in society will be confronted.”

Tehran prosecutor Gholam Hossein Esmaili called connecting the acid attacks to vice groups “oppression,” saying, “The investigations show that these events have no relationship to the religious engaged in the act of 'enjoining good and forbidding wrong,' and making that case is an immoral act. Unfortunately, some media reinforced it.”