Nonproliferation experts hope that an Iran agreement won’t encourage other countries to seek the nuclear fuel cycle and that a decade or more of restrictions on Iran’s program can be used to promote other measures to stem the spread of dangerous technologies and materials. 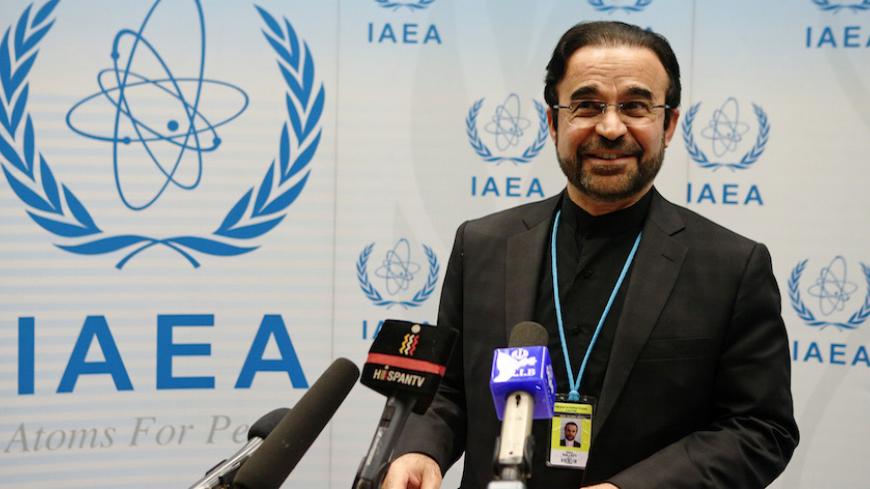 Iran's ambassador to the International Atomic Energy Agency, Reza Najafi, addresses the media after a board of governors meeting at the IAEA headquarters in Vienna, March 4, 2015. - REUTERS/Heinz-Peter Bader

The framework for a long-term Iran nuclear deal, if it is completed by June 30, should prevent Iran from developing a nuclear weapon for at least a decade. But experts hope to use the next few years to lock in other improvements to the international nonproliferation system that will make it less likely that the world will face another crisis like it has with Iran and North Korea.

The last major improvement to the nonproliferation regime was after the Iraq war in 1991, Sharon Squassoni, director of the proliferation prevention program at the Center for Strategic and International Studies (CSIS), told Al-Monitor.

That was when the international community came up with the idea of the Additional Protocol — an addition to a country’s safeguards agreement with the International Atomic Energy Agency (IAEA) that allows for inspections of sites suspected of concealing undeclared nuclear activity. The protocol, Squassoni said, went into effect in 1998; the IAEA also got new sampling techniques and tools to detect radioactive material.

Other improvements include upgrades in nuclear security and safety, better export controls and the Proliferation Security Initiative to interdict smuggling of nuclear-related materials.

In the aftermath of an Iran deal and in advance of a summit next year on nuclear security, experts have a wish list of measures they hope will be embraced by the world’s nuclear powers. Among them:

Pitted against these possible advances is the fact that, if last week’s framework is completed, it will allow Iran to maintain a fairly robust nuclear program, which could encourage other would-be nuclear states to develop facilities of their own.

This agreement “will make it more difficult to convince other countries that they can’t have enrichment,” Bunn told Al-Monitor. But it may be possible to “structure incentives so that other countries are not so interested” in having the fuel cycle on their soil, he said.

One of the best ways to do that, said Bunn, is to provide guarantees on the “back end,” that countries or facilities providing nuclear fuel will take back spent fuel for storage. That way, countries won’t need “their own Yucca Mountains,” Bunn said, referring to the underground depository in Nevada that has been under consideration for years — but blocked by President Barack Obama — as a site for long-term storage of radioactive materials from US reactors. Iran already sends back spent fuel to Russia from its one functioning civilian nuclear power plant at Bushehr.

One of the best aspects of the new deal, in the view of nuclear experts, is that it would shut off a path to a nuclear weapon using plutonium, another key potential bomb ingredient. Iran has agreed to modify its heavy water reactor at Arak such that it produces only a tiny amount of plutonium and not to reprocess on its own soil. It has also agreed to send out of the country the spent fuel from Arak.

Unfortunately, other countries are not so willing to relinquish this dangerous material. According to the recent report by CSIS and the Nuclear Threat Initiative, India has four plutonium reprocessing plants, “only one of which is subject to intermittent IAEA safeguards,” while India’s rival Pakistan is also “ramping up plutonium production … solely related to increased weapons production.” Neither India nor Pakistan ever joined the Nuclear Nonproliferation Treaty.

Even if other nations can be persuaded not to use existing technology to make their own nuclear fuel and to give up the use of HEU for medical, research and naval purposes, Squassoni said there are new proliferation dangers on the horizon that could result from technical advances.

One is the use of lasers to enrich uranium, which requires smaller facilities that are harder to detect than the industrial-size plants needed to enrich uranium for commercial use. Another is so-called additive manufacturing or 3-D printers, which might be able to make centrifuge or other nuclear-related parts in place of current technology.

According to Squassoni, “If we don’t come up with institutional arrangements that address these issues in advance, we could be fighting a rearguard battle” against new sources of proliferation.

[Editor's Note: An earlier version of this article listed a guaranteed supply of material for reactors that pledge to convert from LEU rather than HEU. Al-Monitor regrets the error.]