After Iran milestone, France nudges US on Palestinian UN bid

The French are working on a Security Council resolution to support a two-state solution for the Israeli-Palestinian conflict, hoping the Americans will be more favorable to UN mediation on the heels of a framework agreement for an Iran deal. 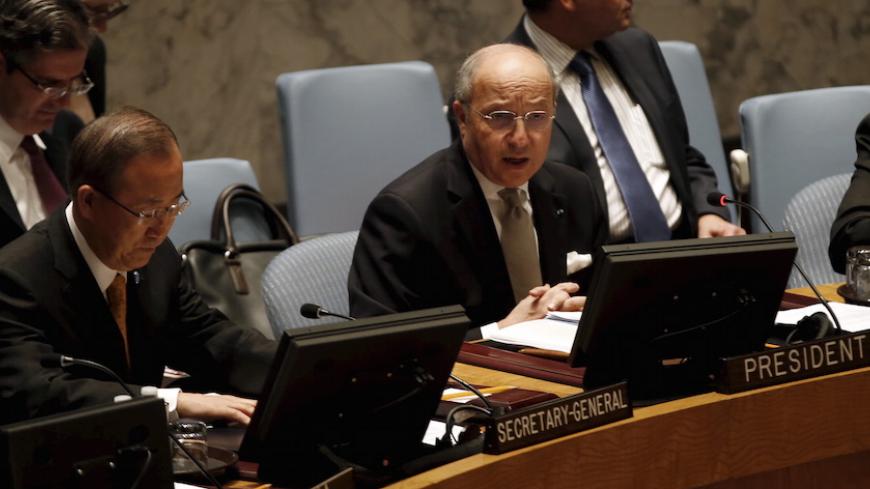 French Foreign Minister Laurent Fabius chairs a UN Security Council meeting on the crisis in the Middle East in France's role as the current president of the council at the UN headquarters in New York, March 27, 2015. - REUTERS/Mike Segar 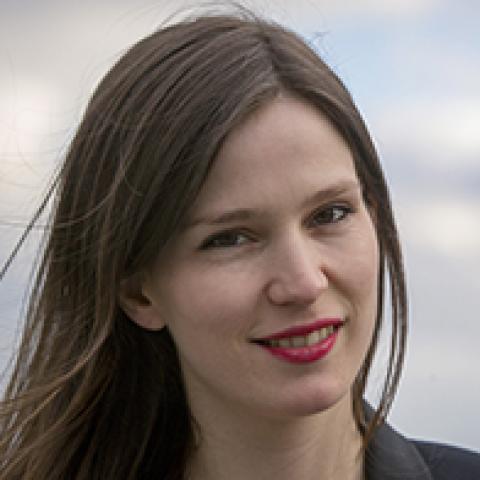 As the US administration celebrates a hard-fought breakthrough on the nuclear negotiations with Iran, actors at the United Nations are keen to nudge the Americans toward another issue that could further cement the president’s legacy in diplomacy.

The French are preparing a new UN Security Council resolution on negotiations that would seek to enforce a two-state solution in the decadeslong Israeli-Palestinian conflict, but for it to succeed, they need the cooperation of Israel’s traditional guardian, the United States, which has so far sent mixed signals on the issue.

It was understood that the Americans could begin to consider the Middle East conflict after the deadline for a preliminary deal with Iran, and some Middle Eastern diplomats hope that a positive outcome will offer momentum for the Palestinian issue. UN Ambassador to Jordan Dina Kawar told reporters April 2, “I like to think that now this deal has been signed, Secretary of State John Kerry will have the time and momentum to try to solve the Israeli-Palestinian conflict.”

But the initial conduct of the Americans might suggest otherwise. Shortly after the Iran agreement was announced, President Barack Obama quickly reiterated his commitment to Israel's security, noting that he had asked his national security team to step up collaboration with the new government on defense measures between the two countries.

Robert Danin, a former White House official and senior fellow at the Council on Foreign Relations, told Al-Monitor that the move may suggest further hardships for the French in their efforts to solicit US support. “The US wants to diminish Israeli opposition to the deal with Iran,” he said. “One way may be to be less supportive of the French initiative at the UN, at least in the short term. The administration will want to demonstrate to Israel and its supporters that the US has Israel’s back.”

There are also concerns among some Middle Eastern diplomats that Obama will be made vulnerable by a Republican-led campaign to prevent a final agreement with Iran by June 30, weakening his ability to tackle another potentially historic issue. The French, however, who have long supported efforts for Palestinian statehood, are determined to bring the issue to the council.

“We don’t, and we won’t, give up on this,” French Ambassador to the UN Francois Delattre told reporters last week following a briefing at the Security Council by UN Middle East envoy Robert Serry, who said that after years of futile bilateral talks between the two parties that he was tired of “dragging a dead horse.”

“Hasn’t the time come for the council to lead?” Serry asked at his final briefing before stepping down after a seven-year tenure.

The United States seemed more favorable than ever to UN mediation after Israeli Prime Minister Benjamin Netanyahu’s explosive pre-election pledge to block the creation of a Palestinian state on his watch, prompting Obama to threaten to “reassess our options” in addressing the Israeli-Palestinian conflict. US diplomats told their French and British counterparts that Washington might be favorable to considering a UN resolution if the new Israeli government is, as Netanyahu threatened, opposed to a two-state solution.

“The Palestinians feel as though Netanyahu unwillingly offered them a huge gift,” one Middle Eastern diplomat told Al-Monitor on condition of anonymity. “By saying he won’t cooperate with what is the objective of the UN, the United States and almost the whole world, Netanyahu made it possible for the US to finally say, 'OK, we’re going to have to bring in the Security Council here.'”

That was not the case in December, when the United States protected Israel by vetoing a draft resolution submitted by the French, citing poor timing ahead of the Israeli election.

“Some partners thought it was not the right time,” French Foreign Minister Laurent Fabius told Al-Monitor. “But now the elections have taken place; the situation is safe.”

A Western diplomat who has knowledge of the French strategy told Al-Monitor on condition of anonymity, “The French objective is to create momentum, to draw the Americans away from doing something futile on their own under pro-Israeli pressure, and get them to commit to the Security Council route.” He added, “The Americans can’t do nothing because that’s politically untenable, but they might be concerned that the Security Council route could be too costly to their relationship with Israel. … The French are willing to work frankly with the Americans, to say 'Here’s our proposal, now tell us what is really important to you and what isn’t.'”

Danin believes that aside from some fallout from the Iran deal, the United States is not opposed to cooperating with France. He said, “There may be elements in the French draft that might be problematic, but I think the Americans are willing to engage and I expect the French would be willing to amend accordingly.”

The original bill, which forms the basis of the new, as yet unfinished draft, called for a “just, lasting and comprehensive peaceful solution that fulfills the vision of two independent, democratic and prosperous states … living side by side in peace and security within mutually and internationally recognized borders.”

The proposal gave a two-year deadline for an agreement that would include borders based on the 1967 lines with some “mutually agreed” and “limited” land swaps, the withdrawal of Israeli troops from the Palestinian territories and Jerusalem as the shared capital of the two states.

It did not mention the Israeli demand to be recognized as a “Jewish state,” one of the prickliest sticking points between the two parties and one that the Palestinians have vowed not to budge on. That point, along with other pro-Israeli themes, is expected to be introduced by the Americans if they choose to collaborate on the text.

The Americans have so far remained tight-lipped on France’s renewed efforts and have signaled they will continue to be so until Netanyahu forms a new government.

“We continue to engage with key stakeholders, including the French, to find a way forward that advances the interest we and others share in a two-state solution,” said a US official who wished to remain anonymous, adding that he could not comment on a “hypothetical resolution.”

To Palestinian UN envoy Riyad Mansour, who has been battling for a Palestinian state for half of his life, the Iranian deal should serve as an asset rather than an obstacle. “Logic would suggest that the time is ripe,” he said.