The recent discovery of a 2.8 kilometer-long tunnel linking the Sinai to Gaza raised questions about the parties supporting digging operations, as such work requires expensive and advanced equipment, as well as an extensive labor force. 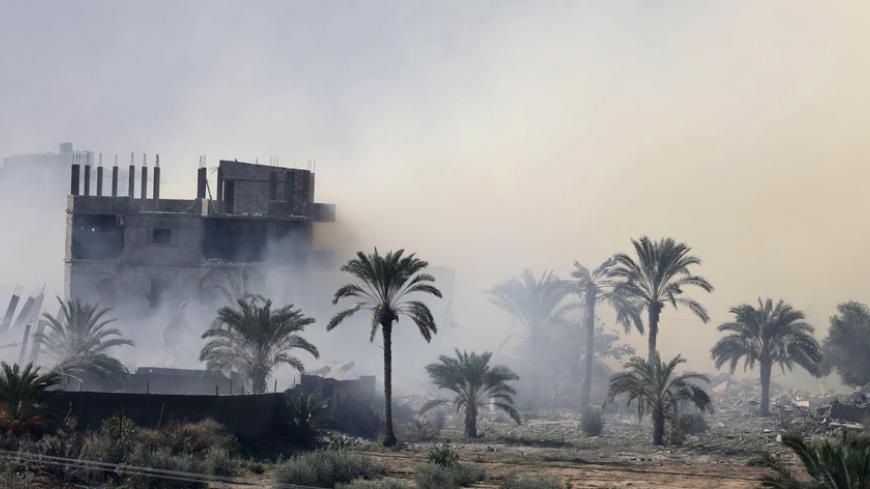 Smoke rises after a house is blown up during a military operation by Egyptian security forces in the Egyptian city of Rafah, near the border with the southern Gaza Strip, Nov. 6, 2014. - REUTERS/Ibraheem Abu Mustafa

CAIRO — “Tunnels are gates for terrorism and external support of terrorism from Gaza to Sinai,” security expert Maj. Gen. Khalid Okasha said when asked about the news of the buffer zone expansion on the border between the Gaza Strip and the Sinai Peninsula in Egypt. The news came after Egyptian President Abdel Fattah al-Sisi — temporarily in charge of the legislative power until the election of parliament — issued a law on April 12 to maximize to life imprisonment (25 years) the penalty of digging tunnels linking the Egyptian border to any other state. Also, using such tunnels or being aware of their existence without reporting them is to be punished.

Okasha told Al-Monitor, “Expanding the buffer zone, maximizing tunnel digging and using sanctions will restore stability to Sinai and decrease the amount of terrorist attacks that often enter into Egypt from the Gaza border."

On Oct. 25, 2014, the Egyptian state issued a decision to remove all facilities, farms and houses located in the buffer zone (500 meters, or 0.3 miles, west of the Gaza Strip) and vowed to compensate the population by providing them with other houses or money to buy a house. On Nov. 14, another decision was issued to expand the buffer zone to 1,000 meters (0.6 miles) west of Gaza and rid that area of all establishments and houses. The same procedures were to be followed and house owners were promised compensation.

While the armed forces are about to finish removing the houses, Sinai activist Eid Marzouki said in an interview on Al Jazeera Mubasher Misr that 90% of the displaced people in Sinai are yet to receive compensation.

The importance of the buffer zone expansion is becoming clear in light of the armed forces’ announcement on March 29 of the discovery of a secret tunnel connecting Gaza to Sinai and stretching along 2.8 kilometers (1.7 miles) into Egyptian territory. This tunnel is the longest tunnel yet to be discovered by the armed forces.

Nasser Khaled, an infrastructure expert and soil mechanical engineer, told Al-Monitor that digging such a tunnel requires modern equipment and a large number of workers to dig either in rocks or loose land. He said the process takes four to five months, while the average cost of the required equipment is no less than about 10 million Egyptian pounds ($1.3 million).

Khaled said that most of the manufacturers of such equipment do not authorize sales except to states and major engineering and construction companies. He added that the primitive or manual drilling of such tunnels may take years.

Amr Radwan, an infrastructure expert and soil mechanical engineer told Al-Monitor that it is difficult to determine how long it takes to dig such a tunnel unless the nature of the used equipment is identified and the number of workers as well as the specifications of the rocks and soil are known. He said those operations are risky because of loose rocks where drilling could lead to the quick collapse of a tunnel.

The information about the costly equipment, the fact that they are only sold to specific parties and the importance of identifying the nature of the rocks before drilling are factors that indicate that construction companies or experts may be secretly supporting the drilling operations.

Major construction companies in the Gaza Strip have faced difficulties after the Egyptian authorities tightened their control over the tunnels, after the ousting of Mohammed Morsi in July 2013 and the intensification of the terror attacks in Sinai, through which a large proportion of building materials would enter the country. This led in January 2014 to the closing of about 280-300 companies and factories amid a blockade imposed by Israeli forces on the entry of construction materials into the Gaza Strip.

The Turkish state news agency, Anatolia, reported Nabil Abimelech, the head of the Federation of Contractors in the Gaza Strip, as saying that the construction sector in Gaza is one of the most affected sectors by the Egyptian armed forces’ tightened control over the tunnels, and 50% of the construction projects have been stalled after construction materials could not enter through the tunnels linking Gaza to Sinai.

In the same context, security expert Maj. Gen. Sameh Seif al-Yazel said in a press statement on Aug. 12, 2012, that the Hamas tunnel committee — which was dismantled on April 9, 2014, and which was affiliated with the Interior Ministry of the Hamas government — facilitated contracting companies to dig new tunnels between Gaza and Rafah.

It is worth mentioning that Sisi first passed a law on July 3, 2014, punishing whoever digs a border tunnel linking Egypt to any other state or is aware of the existence of such a tunnel and does not report it. At the time, Sisi left it up to the judiciary to decide on an appropriate punishment, including life imprisonment. However, so far there are no reports of prosecutions under that law, which is therefore likely not much of a deterrent to those involved in the tunnel network.

The tunnels were primitively dug over the course of several years, while the previous regimes neglected or overlooked their digging. Thus, the border can still be controlled by imposing tightened measures and demolishing what is left of the tunnels.

The tunnel digging operations are ongoing, as the financial and technical support of construction companies were affected by the destruction of the tunnels. Experts say these companies are involved in providing the equipment for digging and identifying the nature of the rocks, enabling new tunnels to be dug that stretch deeper than the buffer zone. It is entirely possible that the 2.8-kilometer tunnel was dug recently and its drilling started at the time of Egypt's decision in October 2014 to create a buffer zone, given that it would have taken roughly four to five months to finish.

The difficulty to control the border, and the tunnels in particular, emerges in light of the Camp David Accord between Egypt and Israel, which stipulates the limited deployment of Egyptian forces in Sinai (which lies about 20 kilometers, or 12.5 miles, west of the Egyptian border with Gaza and Israel). Some newspapers reported that 750 soldiers with light weapons and no air coverage are present there, while others say that the number of soldiers was increased to 1,500 following the recent terrorist attacks in Sinai. It is also hard to expand the buffer zone between Gaza and Egypt up to 20 kilometers, as the state would have to pay extensive compensation to the residents of this region.

The borders between Egypt and Gaza are not the only borders experiencing secret tunnel digging operations. On March 21, 2014, the Israel Defense Forces spokesman Peter Lerner announced the discovery of a tunnel connecting Gaza to Israel, stretching hundreds of meters into Israeli territory.