Will Iran nuclear deal lead to rapprochement with Cairo?

The pending nuclear agreement with Iran could provide some much-needed balance for Egypt's shifting foreign policy in the region. 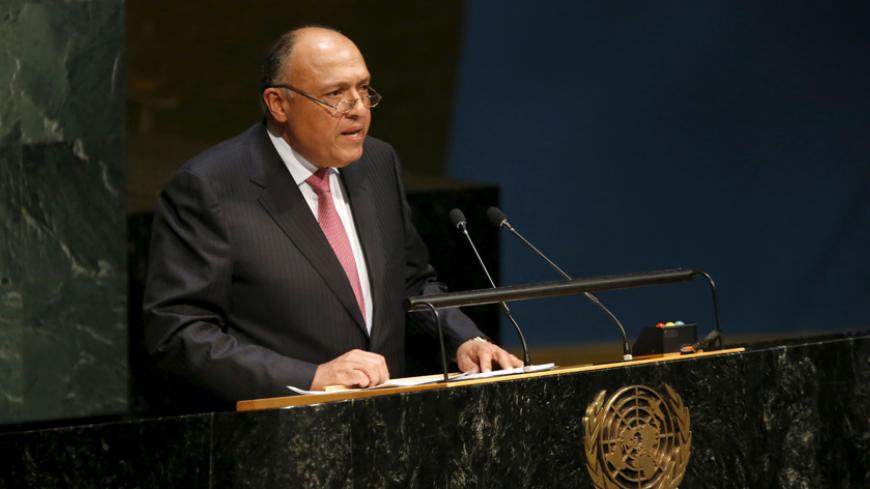 Egypt's Foreign Minister Sameh Shoukry addresses the Opening Meeting of the 2015 Review Conference of the Parties to the Treaty on the Non-Proliferation of Nuclear Weapons at the UN headquarters in New York, April 27, 2015. - REUTERS/Mike Segar

CAIRO — The negotiations have ended and a preliminary framework agreement — acting as a preamble and the basis for a final nuclear agreement — between Iran and six world powers has been reached and is paving the way for the gradual lifting of economic sanctions and embargo on Iran. Ever since, Cairo has appeared to be in a state of anticipation of the negotiations’ results, expected to be completed in June 2015, to formulate an official position to achieve balance in its foreign policy, which could restore the Egyptian-Iranian relations that have been tense over the past three decades.

The tension in the relationship between the two countries started with Egypt's signing of the Camp David accords with Israel in 1979, its support for Iraq during its eight-year conflict with Iran and the Islamic Republic's hailing of Khalid Islambouli — late President Anwar Sadat's assassin — as a religious hero. As of now, Iran has no embassy in Egypt. However, despite the significant improvement in relations after President Hosni Mubarak’s resignation, the tension is back again after the air campaign on Yemen and the Iranian support for the Houthis.

Immediately after it was announced on April 2 from the Swiss city of Lausanne — where talks were held — that an initial agreement on the Iranian nuclear program had been reached, the Egyptian Foreign Ministry issued a press release on April 3, saying that Egypt is following “with interest” the details of the framework agreement, expressing Egypt's hopes that it would “achieve stability in the Middle East and eliminate weapons of mass destruction.”

Meanwhile, Cairo attended a conference for the revision of the Nuclear Non-Proliferation Treaty (NPT) at the UN headquarters in New York on April 27. Egyptian Foreign Minister Sameh Shoukry also held meetings with international officials to discuss developments in the Iranian nuclear dossier in light of the framework agreement during April with, among others, US Secretary of State John Kerry and US Assistant Secretary of State Rose Gottemoeller.

Ambassador Badr Abdel Ati, the spokesman for the Egyptian Foreign Ministry, told Al-Monitor, “We assess the agreement within the framework of Egyptian foreign policy’s general direction, which believes in a principal goal, that is for the Middle East to be free of nuclear proliferation.”

“We hope the international community’s efforts result in having all the countries in the Middle East join the NPT. We also hope that the final agreement with Iran would be completed in June, resulting in real guarantees,” he added.

Despite the permanent tension and anxiety marking Cairo’s relationship with Tehran, and although the official Egyptian statements show a calm and neutral attitude toward the framework agreement, Egypt still has a big challenge, which is how to deal with the new reality of an Iranian rapprochement with the major world powers, especially the United States. In addition, Egypt needs to figure out how to deal with the tension between Iran and the Gulf, whose countries have recently upheld their political and economic support for Egypt.

Al-Monitor contacted official circles concerned with the Iranian dossier at the Egyptian Foreign Ministry to ask about the possibility of an Egyptian-Iranian rapprochement and the extent of Egypt's preparation for a new policy of openness with Iran. An Egyptian diplomatic source told Al-Monitor on condition of anonymity, “Everything is possible and Cairo is always adjusting its international positions in accordance with the regional and international developments.

“Without doubt, the success of having a final draft for the framework agreement in June — as is expected — will be met with more open policies on Cairo’s part. We will not be lone wolves, but we will take into account Egypt’s national security in our dealings with Iran.”

Former Egyptian Ambassador to Iran Mahmoud Faraj told Al-Monitor that he believes Egypt has begun supporting the normalization of relations between Iran and the Arab region, provided that "Tehran express good intentions.” He said, “There are certain views in Egypt that call for restoring calm and stability in Egyptian-Iranian relations. The Egyptian-Iranian rapprochement is still pending a positive Iranian attitude toward the Gulf.”

He added, “The Iranian initiative to stop the fighting in Yemen makes for a positive indicator.”

Mohammed Mohsen Abu Nour, a researcher in international and Iranian affairs, stressed in an interview with Al-Monitor, “The Egyptian-Iranian relations are too complex for an international agreement to come and change them, no matter how successful Tehran is in investing its outcomes regionally, while other parties are still complicating the decision of normalizing relations between Egypt and Iran.”

Abu Nour explained the manifestations of the Iranian diplomatic rapprochement with Egypt since President Abdel Fattah al-Sisi took office, saying, "Tehran has avoided clashing with Egyptian principles concerning [Egypt’s] support for the Muslim Brotherhood. [Tehran] has dealt very carefully with the Muslim Brotherhood dossier and refused to be a safe haven, akin to Ankara and Doha. However, tension soon returned with the crisis in Yemen, since Iran was accused of giving a sectarian, doctrinal dimension to its regional policies.”

Regarding talk of Egypt's concerns about an Iranian-US rapprochement, Abu Nour said, “Egypt is one of the four major powers in the Middle East, and it does not want one of the other three forces to come across as stronger. The nuclear framework agreement will result in a new reality that would enable Iran to be the main force in the Middle East through legitimizing its nuclear program, involving it in the fight against terrorism and assuming the task of securing energy corridors. Of course, this situation will raise Cairo’s fears and concerns over its regional interests.”

The Egyptian-Iranian relations dossier remains wide open for more quick developments expected in the coming period, in the context of Cairo’s efforts, under Sisi’s management, to create a balance in the region and manage its relationships with all regional and international parties — in a way that does not oppose the Gulf, which is still Egypt’s strongest strategic ally. Meanwhile, Cairo will continue to tread carefully on the Iranian issue, in an attempt to preserve the Egyptian identity and interests.