Clashes between armed militants and Palestinian security forces in the West Bank's Balata camp could threaten the existence of the Palestinian government. 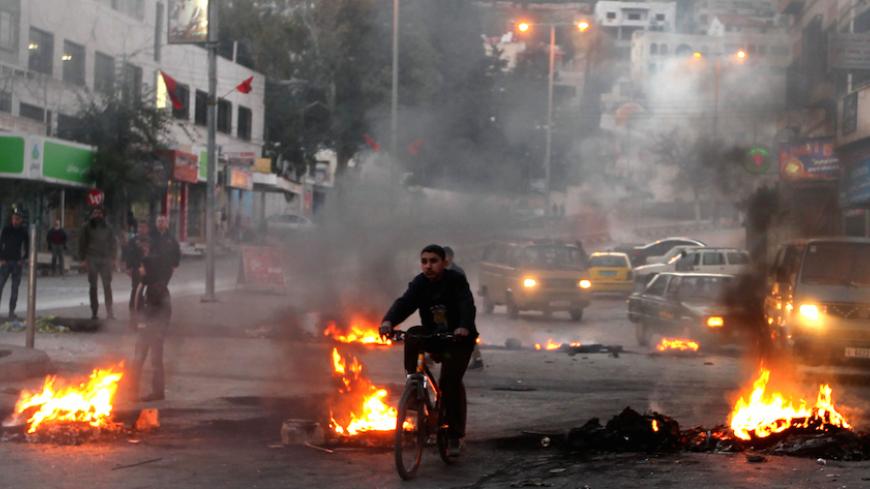 Palestinians burn tires at the entrance to the Balata refugee camp, close to the northern West Bank city of Nablus, on Jan. 21, 2013, as they call for the release of several gunmen arrested by Palestinian security forces.

The largest Palestinian refugee camp in the West Bank is boiling, and the troubles that are usually confined to the Balata camp are now spilling outward, with the main Ramallah-Nablus road blocked by protesters. Continuous gunshots can be heard from the camp, travelers on the road told Al-Monitor. The camp has been the scene of regular clashes between armed militants and the Palestinian security forces since February, raising fears that the camp will provoke a major destabilization campaign against the Palestinian government and presidency.

Situated on the outskirts of the West Bank's largest city, Nablus, the Balata camp is home to over 23,000 Palestinian refugees, according to the United Nations Relief and Works Agency for Palestine Refugees in the Near East.

For years the camp was the hotbed of anti-Israeli protests and resistance, but in recent years it has become the battleground for internal Palestinian wars. The majority of Balata’s residents support the mainline Palestinian movement Fatah, but herein lies the problem.

Moamar Orabi, who runs Wattan TV in Ramallah and is producing an investigative report on Balata, told Al-Monitor that the camp is now home to various rebellious individuals, including those aligned with ousted Fatah leader Mohammed Dahlan. “It is an internal battle within Fatah and it is clear that the refugee camp has been hijacked by militants,” he said.

The most recent troubles began when seven Balata residents wanted by Palestinian security forces handed themselves in as part of a Feb. 12 agreement between Fatah members of parliament close to the militants and the governor of Nablus. The agreement specified that wanted Palestinians from Balata would hand themselves in voluntarily, and, in return, they were to be questioned on specific criminal issues, and be either released or put on trial. The Palestinian government made further arrests and all the detainees were transferred to the Jericho prison — a move that caught locals by surprise. Sources in Nablus told Al-Monitor that the prisoners were transferred to Jericho so that the governor of Nablus would not face undue local pressures to release the prisoners or cut short the investigative process.

Prime Minister Rami Hamdallah publicly vowed as part of the agreement that all the prisoners would be questioned and the innocent would be released. Many of the current prisoners had been imprisoned in Israeli jails. Various websites report that the youths of Balata were tricked by the prime minister and governor to hand themselves in, only to then be transferred to Jericho, where they have no clout.

In a March 15 demonstration outside the Palestinian prime minister’s office in Ramallah, parents of those detained in Jericho complained that security officials tortured their sons, according to a detailed report on Al Jazeera. Protesters say that they heard details of the torture from a 19-year-old who was released. Fatah officials — including several members of parliament — have stated that the detention is legal and is not preventing parents from seeing their sons.

On March 13, Hamdallah himself got a taste of the troubles in Balata. During a visit to the embattled camp to pay his respects to the deceased chief of police, a parent of one of the detainees, Darwish Abu Rajab, stood up and made a strong statement: “You ordered the arrest of our boys. My son has been held for 31 days and he has not been brought before a judge as you had promised.” The prime minister’s entourage was pelted with empty water bottles as a symbolic gesture of protest from the camp residents.

Nablus Gov. Akram Rajoub said that the Palestinian government and security apparatus have not violated their agreement with the people of Balata. The governor told a local news site that the security forces are carrying out the prime minister's promises: “The prime minister said in front of member of parliament Jamal Tirawi that all will be questioned — the innocent will be released and those found guilty will be turned over to the courts to decide their fate.” Earlier, Tirawi had published on his personal Facebook page a plea to President Mahmoud Abbas to put a stop to what he called the “injustice” that is being practiced “in your name against your sons and grandsons.”

In this politically stagnant time, wherein negotiations have stopped and the dreams of Palestinians have been repeatedly dashed, the only remaining battle appears to be the one on the ground to determine who will remain in power within the small enclave left for Palestinians.

The troubles in Balata are a microcosm of the larger political scene in Palestine. As political support for the Palestinian leadership erodes, the Ramallah-based government is compelled to depend on the heavy hand of its security forces to keep the lid on a boiling pot. They are afraid that any relaxation of the security clampdown will produce the kind of chaos that could threaten the very existence of a Palestinian government.