Lawmakers from the United States, France, United Kingdom and Germany warn that bad deal will result in more sanctions "without fail." 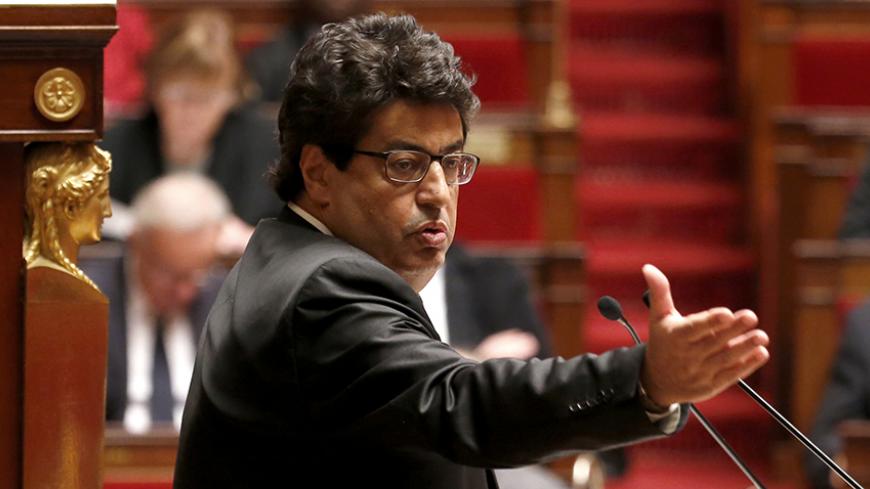 French Union of Democrats and Independents deputy Meyer Habib delivers a speech during a debate on the Palestine status at the National Assembly in Paris, Nov. 28, 2014. - REUTERS/Charles Platiau

Hawkish US and European lawmakers are circulating an unprecedented joint letter warning their respective heads of state that a bad deal with Iran will "without fail" result in more sanctions, Al-Monitor has learned.

Reps. Doug Lamborn, R-Colo., and Randy Weber, R-Texas, began circulating the letter on March 17 to members of the House Armed Services and Foreign Affairs panels. They say the letter has already been signed by four parliamentarians from the so-called E3 nations of France, Britain and Germany that are involved in the multiparty talks over Iran's nuclear program.

"We believe that a nuclear Iran is an imminent threat not only to the U.S. but also to Europe, the Middle East and to the world at large," the two US lawmakers write in a message inviting colleagues to sign on. "With this in mind, we are partnering with members of various European Parliaments to address our concerns to President Obama and to the heads of the European states involved in the negotiations (France, England and Germany), and express our fear of a bad deal."

The letter comes on the heels of an open letter to Iran's leaders by 47 Republican senators warning them that Congress or a future president could undo any agreeement. Apparently informed by the backlash against that letter, this new effort states clearly it is meant to empower, not undercut, the negotiators currently meeting in Switzerland.

"Bearing in mind Iran’s history, we remain skeptical of the Iranian regime’s sincerity and commitment to reach an agreement. The regime violated international law in the first place with a covert attempt to develop nuclear weapons. We fear the regime may attempt to use any further delays or any loopholes in a bad deal to continue these efforts covertly," the letter states. "Further, the continued extension of deadlines weakened the international consensus on the need to prevent a nuclear Iran. In view of the reluctance to ratchet up pressure on Iran and to stand firm against the regime, companies and countries are flocking to Tehran to resume business."

"We do not wish to hinder the negotiations," it says. "However we believe Iran must realize that any failure to negotiate an acceptable deal, one that prevents a nuclear armed Iran, will result without fail in tougher sanctions than ever."

The letter has already been signed by David Burrowes of the United Kingdom, Meyer Habib of France, and Roderich Kiesewetter and Johann Wadephul of Germany, according to Lamborn and Weber. They are seeking signatures until March 23 and aim to send out the letter on March 24, which is the deadline for nuclear talks.

Burrowes is a member of British Prime Minister David Cameron's Conservative Party and an officer of the Conservative Friends of Israel group. Habib, who is Jewish and holds dual French and Israeli nationalities, represents French citizens living abroad around the Mediterranean, including in Israel. And Kiesewetter and Wadephul are both members of Chancellor Angela Merkel's Christian Democratic Union.