The House Armed Services Committee approved legislation that demands Iran abandon uranium enrichment and its support for terrorism in exchange for lifting sanctions. 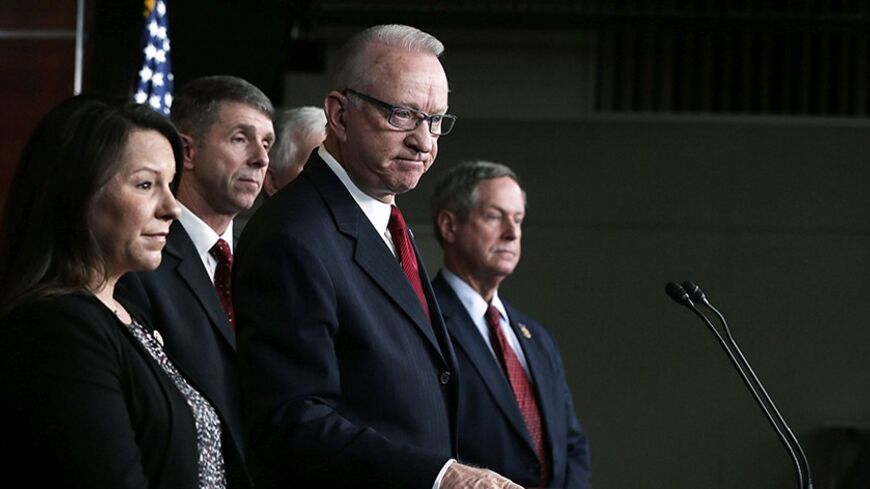 House lawmakers put their demand that Iran abandon uranium enrichment squarely back on the table overnight amid continued congressional concern that the Barack Obama administration is being hoodwinked in its nuclear dealings with Tehran.

The House Armed Services panel passed an amendment to the annual defense bill from Rep. Doug Lamborn, R-Colo., that establishes a nonbinding "sense of Congress" that sanctions can only be lifted if Iran "ceases the enrichment of uranium," dismantles its "nuclear, biological, and chemical weapons and ballistic missiles and ballistic missile launch technology" and stops "providing support for acts of international terrorism." The amendment, which passed along a party-line voice vote, was one of several aimed squarely at containing Iran following November's interim agreement with Iran.

"The entire ballgame with Iran's gaining nuclear weapon capability lies in their ability to enrich uranium and produce plutonium," Rep. Trent Franks, R-Ariz. — the author of stalled legislation authorizing the use of force against Iran if talks fail — said during debate on the amendment. "This Congress has yet to be clearly on record."

The amendment resurrects a debate that had lain dormant since the Senate, bowing to intense pressure from the administration, earlier this year indefinitely postponed action on a bipartisan sanctions bill that would have required a final deal to "dismantle Iran’s illicit nuclear infrastructure." Several US laws and UN resolutions in the past have called for Iran to suspend enrichment, but the administration and others argue that doing so now would derail talks.

"This is a very bad idea," Rep. Adam Smith, D-Wash., the top Democrat on the Armed Services panel, said during the markup. "It completely ties the hands of our negotiators … by setting out very specific criteria that have to be met before a deal can be achieved, going well behind the nuclear question."

Outside groups favorable to a deal immediately lambasted passage of the amendment.

"Moving the goalposts in the middle of high stakes negotiations could kill talks and start a war," Jamal Abdi, policy director of the National Iranian American Council, told Al-Monitor in an emailed statement. "This is a huge favor to hardliners on Iran since it would put the blame on the US for violating the deal, and help unwind international efforts. Supporters of this amendment want to sabotage the top goal of preventing a nuclear-armed Iran in order to score political points."

The Defense panel contains several other provisions aimed at Iran.

Another amendment from Lamborn requires the Pentagon to produce reports on defense contractors that have conducted a "significant transaction" with the Iranian government or sanctioned Iranians. The amendment is aimed squarely at France's Michelin, which has obtained $2.4 billion in US contracts since 2007 but drew lawmakers' ire when it participated in a delegation of French companies to Tehran earlier this year.

"We urge you to direct the Department to make clear to Michelin that any business with the Islamic Republic of Iran would make further contracts with the Department of Defense impossible,” Lamborn wrote in a February letter to Secretary of Defense Chuck Hagel co-signed by Franks and fellow Armed Services member Joe Heck, R-Nev.

The committee also approved an amendment from Rep. Jackie Walorski, R-Ind., requiring the administration to report on Iran's nuclear program and whether it is complying with the terms of its agreement with the United States and the international community. The base bill also recommended setting aside an extra $175 million — doubling what the Obama administration requested in its fiscal year 2015 budget — for the Iron Dome missile defense system in Israel and for pursuing status of forces agreements with Gulf Cooperation Council countries.

The base bill, the House Armed Services Committee said in a summary, reflects the belief "that an enduring presence in the Middle East is vital, to include maintaining a robust forward presence and posture to support our allies [and] partners in the region and to deter Iran."