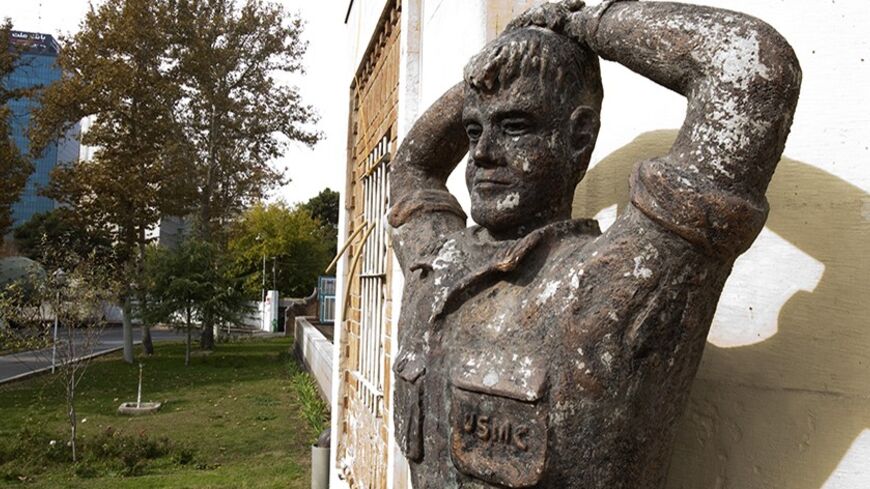 Iran's UN ambassador, Hamid Aboutalebi, alleged to have played a role in the Iran hostage crisis, was targeted in legislation this week. Above, a statue of a US hostage is displayed in front of the former US Embassy in Tehran, Nov. 19, 2011. - REUTERS/Raheb Homavandi

The White House on Friday formally announced that it would not allow Iran’s pick for UN envoy to enter the US, one day after legislation to that effect unanimously cleared Congress.

“We have informed the United Nations and Iran that we will not issue a visa to Mr. [Hamid] Aboutalebi,” White House spokesman Jay Carney told reporters at his daily press briefing. “We certainly share the intent of the bill passed by Congress.”

The decision drew an immediate rebuke from Iran.

“It is a regrettable decision by the US Administration which is in contravention of international law, the obligation of the host country and the inherent right of sovereign member states to designate their representatives to the United Nations,” Hamid Babaei, Counselor and Head of Press Office to Iran’s Mission to the United Nations, said in an emailed statement.

The legislation from Sen. Ted Cruz, R-Texas, bars entry into the United States to anyone "found to have been engaged in espionage activities or a terrorist activity."

The bill is aimed squarely at Hamid Aboutalebi, Iran's nominee for UN ambassador, who has admitted to serving as a translator for the revolutionary students who took over the US Embassy in Tehran in 1979 and held 52 Americans hostage for 444 days.

"This bill gives the president the authority he needs to deny this individual a visa," Rep. Doug Lamborn, R-Colo., who spearheaded the effort in the House, said on the House floor April 10, after the Cruz bill passed by unanimous consent. Lamborn called it "unconscionable and unacceptable" to have an "Iranian terrorist walking the streets of New York City and having diplomatic immunity."

The bill passed the Senate without objection on April 7. President Barack Obama is now expected to sign it, since his veto would easily be overridden and the White House has indicated Aboutalebi is not an acceptable choice.

"We share the Senate's concerns regarding this case and find the potential … nomination is extremely troubling," White House spokesman Jay Carney said April 8. "The US government has informed the government of Iran that this potential selection is not viable."

Iran, however, appears to be digging in its heels.

"We have chosen our envoy and we have done the official correspondence for the visa application,” Iranian Foreign Ministry spokeswoman Marzieh Afkham said April 8, according to the Tehran Times.

The nomination risks deepening the US-Iranian rift even as international nuclear talks in Vienna appear to be gaining momentum. Negotiators have said they expect to start drafting a final deal next month.

The talks, said Sen. Tim Kaine, D-Va., appear to be "really proceeding in a productive way." That has left him to "scratch [his] head" about why Iran would nominate someone like Aboutalebi to the UN post.

"I think it's unfortunate," Kaine, the chairman of the Senate Foreign Relations panel on Near Eastern and South and Central Asian Affairs, told Al-Monitor. "There are external events every day that make [the talks] complicated. But so far that has not stopped the discussions in Vienna."

Some Republicans have made no effort to hide their desire to see unrelated tensions carry over to the nuclear talks they view as favoring Iran. They have felt encouraged by the bipartisan rejection of Aboutalebi.

"This is the Democratic Party figuring out who these jerks are," said Sen. Mark Kirk, R-Ill., the coauthor of sanctions legislation that's being held up by Senate Majority Leader Harry Reid, D-Nev. "It's good that the Democrats are understanding these people really hate the United States and they're not our friends."

Rep. Henry Waxman, D-Calif., the dean of the Jewish delegation in Congress, said the unanimous support for the Aboutalebi bill was a warning to Iran that Congress is looking at the nuclear talks closely. He was less critical about the envoy's selection than others. "The question almost assumes that we should be against this guy because 30-plus years ago he was part of a demonstration against the United States," Waxman said. But the vote "helps" send a message, according to Waxman.

"There should be no doubt for the Iranians that Congress is willing to go with additional sanctions, that Congress is hostile to the depredation of human rights by Iran and will stand up to Iran when they threaten the very existence of the State of Israel," Waxman told Al-Monitor.

"I'm willing to stand behind the message to Iran," he said. "I'm not sure this was the place to draw that line."